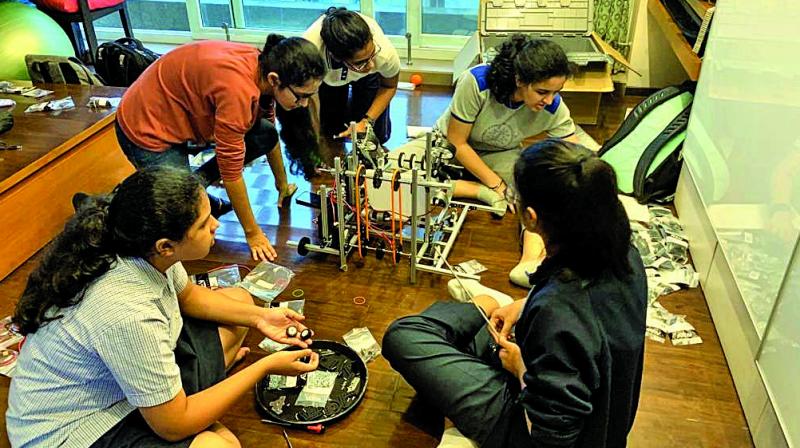 Scheduled to be held between October 24 and 27 in Dubai, the event will witness the first all-girls team to represent India in STEM/robotics.

In recent times, climate change and its implications on the environment and marine life has been a topic of debate for most climate advocacy organisations, nations and individuals, as the need to address the issue has now become more pertinent. And to address the issue of warming waters and ocean acidification at a global level and seek a solution through technology, five students from Mumbai will be representing the country at the third edition of FIRST Global Challenge 2019. Scheduled to be held between October 24 and 27 in Dubai, the event will witness the first all-girls team to represent India in STEM/robotics.

“It is a matter of pride and pleasure. We hope that our performance at the global challenge will inspire and encourage other children,” says 17-year-old Aarushi Shah from Bombay International School who is looking after the robot design, construction and electrical for this project. Aarushi along with Radhika Sekhsaria, Aayushi Nainan, Lavanya Iyer, and Jasmehar Kochhar will be heading to Dubai for the competition.

As this year’s theme focuses on the ocean opportunities and ocean pollution that negatively impacts marine life and global populations, it seeks to educate the participating teams about taking action to preserve oceans. It also throws up a challenge to the young and budding scientists to build robots for cleaning up the ocean of pollutants. And with more than 2,000 students from 193 countries from across the world, the young girls have gone through a rigorous selection process that involved four rounds of technical interviews. “We were pitted against 20 teams vying for the prestigious spot to make it to team India,” reveals 15-year-old Radhika from Oberoi International School, who is responsible for fundraising and programming.

Organised by the FIRST Global Challenge – a not-for-profit organisation based in the United States, it invites nations from across the world to send their teams to compete in a Robotics Olympics themed around greatest challenges faced by the planet. “Each year, a different challenge takes centre stage in an effort to foster understanding and cooperation among the youth of the world as they use their abilities to solve the world’s problems,” explains 16-year-old Aayushi Nainan from Dhirubhai Ambani International School who primarily focuses on the strategy and construction of the robot, along with 14 year-old Lavanya Iyer from her school.

Talking about the project, Aarushi explains that this will be a simulated scenario and they will work with robot prototypes. It will set the ball rolling on the possibility of using robots to clean up seas and oceans. “This is so important in sustaining marine life and reversing climate change,” she says. To which 16-year-old Jasmehar from Podar International School adds that building robot for such challenges requires a lot of effort and resources. “We were in need of the right kind of materials, resources, space, outreach and many other things. While our mentors have helped meet many of our needs, we are really lagging behind in terms of funds,” she rues while focusing on programming and strategising of the project. As of now, the girls are hoping for the people to come forward and help generate enough funds in order to successfully participate in the challenge. “We are really keeping our fingers crossed on that,” adds Radhika.

In addition, the teens are also raising funds to support an all-girls team to participate in the First Lego League that is organised for the elementary and middle school students every year. “We hope that more girls will start embracing STEM when they realise that the opportunities are limitless. We are making efforts in our own small way to make STEM accessible to underprivileged children. That’s how we feel the nation will see a positive impact,” muses Lavanya in conclusion.