Meet the plogman of India

We all complain about the environment and waste around, but how many of us actually get down to do something about it? 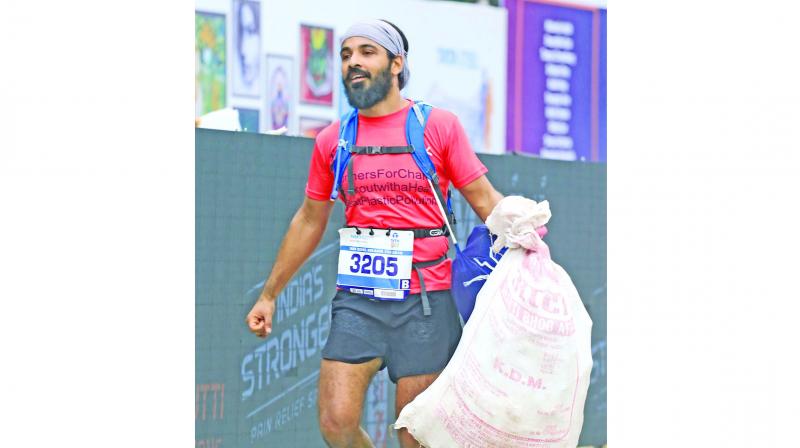 A marathoner, traveller, entrepreneur, blogger, Ripu Daman Bevli’s love affair with the environment is not newfound. This 31-year-old Delhiite founded Ploggers of India from his initial initiative ‘My City My Responsibility’, a couple of years back, as an offshoot of their running activity. Where marathoners leave a trail of waste behind, these runners, on the contrary, picked up waste on their run.

“We crib and complain about so much litter around but who is responsible for creating it — us. And what are we doing about it? We have to be responsible for our own litter. This was what got me going to take the ownership of cleaning up my own surrounding before we involve officials and corporations”, says Ripu.

He left his software startup to get on the road and engage with people in a bid to make them a responsible citizens and pick up their own trash.

“Plogging, a Swedish term, is where a group of people collectively decide to clean up a place and get it rid of plastic waste. In the span of 2 years, Ploggers of India have successfully completed their initiative of cleaning up 21 cities in 300 drives.”

With this vision to see India litter free, Ripu embarked on a journey where he is running and cleaning up 1,000 kms across 50 states of India — the longest clean up drive ever! He aims at making people aware of the other alternatives they have other than single-use and how they can curb down on its usage. During the journey he will be collecting trash from the beaches of Goa to the hills in Jammu, from the Gangetic plains to forts and famous monuments of India.

“RElan Run to Make India Litter Free is a culmination of two years of hard work, sweat, community building to reach every nook and corner of this country to turn this dream of Swachh and Swasth Bharat a reality” Ripu says.

An initiative like this can be no mean task. Apart from commitment and time, it would require a lot of expenses as well. “I have been bootstrapping this initiative so all the expenses come from my pocket. We needed partners who could help us sustain this program so we have a couple of partners like RElan and some of the other expenses are crowdfunded”.

On August 30, 2019, Ripu started from India Gate and has now reached Chennai after Kochi, Madurai, Coimbatore, Salem and Puducherry.

“We started our clean up with Marina Beach in Chennai on Tuesday morning. We covered around 3 km with 30+ participants and succeeded in collecting 15 bags of trash equivalent to 62 kg. In the evening we went to T. Nagar and Wednesday morning will be at Elliot’s beach”, says the Plogman who will move to Vellore next.

“My biggest focus is to engage kids in plogging as habits inculcated at that age are going to last a lifetime and they are going to be the leaders of a positive change!”,
he adds.