Contemplating female energy, and saluting her with dance

Vani Vak-Devi Saraswati as portrayed by Bengaluru’s Praveen Kumar was a highlight. 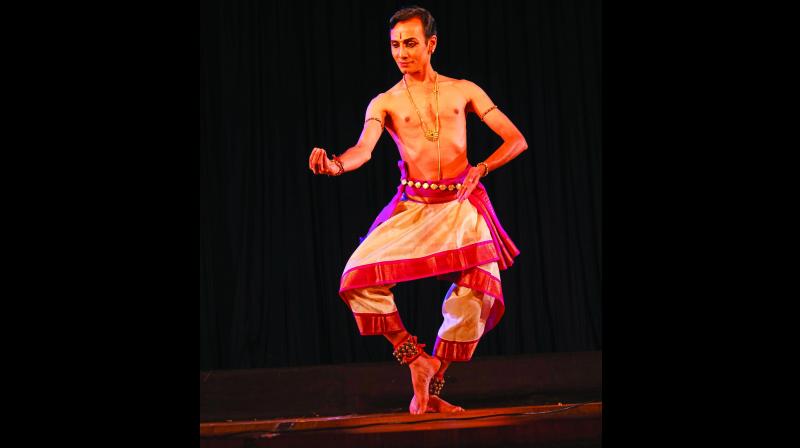 Narada Gana Sabha’s dance wing Natyarangam, for the 23rd consecutive year of its annual thematic festival, focussed on Devi Bharatham, or female divinity. Against the backdrop of atrocities, women in many parts of the country are subjected to, the theme evoked feelings of irony. Perhaps that was the idea — to highlight the fact that for a culture where divinity itself is conceived in the feminine aspect — acts against women constitute an unforgivable aberration. Showcased in roles of Janani (creator), Paalini the protector who destroys the undivine and Poorani embodying the completeness of ultimate emancipation, the five-day festival, through a selection of excellent Bharatanatyam dancers, presented an encapsulation of different manifestations of divine female energy.

In a venture which over the years has acquired an audience, the recourse to less known literature from widespread Tamil and Sanskrit sources mainly, with explanations and introductions in Tamil, communicates to a niche audience. Sudha Seshaiyyan’s erudite pre-performance descriptions, of what was often high poetry with metaphysical connotations, went over the head for the less well read and the non-Tamilian. Dance must communicate with the wider audience.

A dancer trained by the Dhananjayans, Divya Shivasundar whose recital was woven round Janani, focussed on Devi’s role as the nurturing Creator and Cosmic Mother. Instead of seizing the chance, in an off- beat programme of this nature, of getting away from the Margam Concert format, the dancer’s Margam style presentation seemed an instance of lost opportunity. Starting with ‘ Taye Tripurasundari’ in Shuddha Saveri, came the varnam like centrepiece ‘Mata Para Shakti’ in Shanmukhapriya ,choreographed by her gurus the Dhananjayans, dovetailed with Balamurali Krishna’s ‘Amma Anandadayini’ in Gambhira Nattai, as a salutation to the Mother, the supreme Creator of the five elements and the all- powerful nurturer  helping remove inner turmoil in the devotee. Given the dancer’s immaculate technique and dignified presence, it became another traditional recital by a proficient Bharatanatyam dancer.  Tables were turned in the interpretative item “naan oru vilaiyattu bommaiyya” (am I a plaything (that you treat me thus)), where Earth the greatest manifestation of divinity in the female aspect, questions the devotee on her own condition with the ecology round her of water, air, earth, sky totally polluted, by mankind. “Am I to be used as a toy and trifled with?” The interpretation of the opening sentence was eloquent. The Tillana in Maand, ended the performance. Accompanists constituted fine vocalist Preeti Mahesh, Shobhana Balachandra Nattuvangam), Nagarajan (mridangam) K.  Sivaraman (violin) Anirudh Bharadwaj (flute). 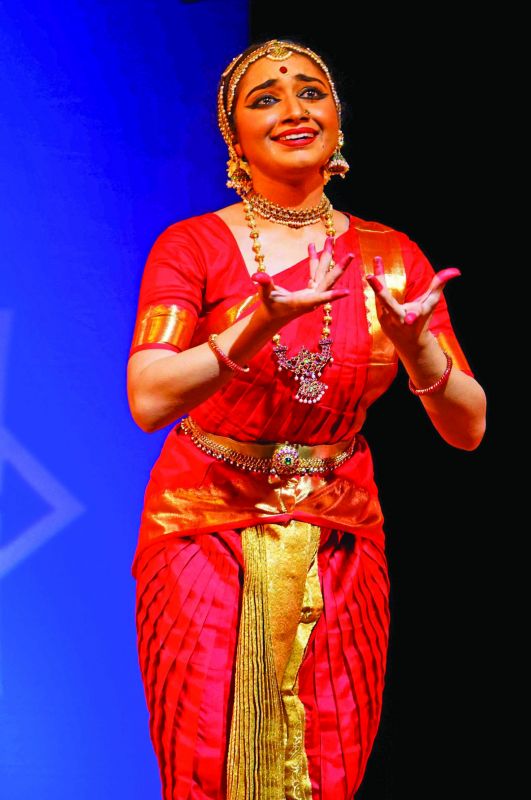 The recital on Harini (Lakshmi) described by Sudha Seshayyan as “Malaimagal” (daughter of the mountains), “Alaimagal” (the daughter of the sea waves and “Kalaimagal” (the embodiment of all art) was intelligently conceived by dancer Meera Sreenarayan who introduced the bee sucking the nectar from the lotus (symbol of the Devi) as a narrator linking the entire performance. The bee intoxicated with honey symbolises the devotee having attained that pinnacle of total awareness of Lakshmi or “Sree”. Starting with the Alarippu rhythmic syllables, with her expressive netrabhinaya, Meera suggested the bee flying round the lotus, settling down to suck nectar. Metaphysically, the bee represents the jeevatma yearning to be one with the Paramatma symbolised by the radiant Lotus. The bee’s narrations visualise Lakshmi in various moods and scenes — her glorious surfacing in the ocean being churned, a nrityateermanam catching the act, with music in Sreeragam during the bee’s meditation on Sree. Recollections of Lakshmi’s marriage, visualise the ecstasy of swadheenapatika Lakshmi as Vishnu’s consort, expressed through the Annamacharya composition “Palukutenalatalli” in Abheri.

The folksy element catches Chandala Lakshmi knocking on Lord Jagannath’s door, being denied entrance much to her anger,  and replete with hasya rasa is the bee’s recollection of the Bhoodevi/Sridevi altercation, when both are but one and the same! The Odiya lyric this scene was based on requires some help over singer’s pronunciational pitfalls. Finale was a salutation to Varalakshmi in Madhyamavati. Altogether a vibrant performer!

Again it was a case of lost opportunity notwithstanding an arresting dancer in Mumbai based Pavitra Bhatt whose performance searchlight was on Paalini, accompanied by a fine singer like Delhi’s K. Venkateshwar. Compulsive dance activity interpreting destroyer Kali, Durga, Bhavani to protect the devotee, was frenetic, without communicating in the details barring glimpses, like Goddess Lalitha emerging from the Agni Kund of the Yajna, in bejewelled glory, and the Devi’s fierce battle against Bandasura. Shivaji’s Bhavani expressed through the lyric “kaise kahoon ton kachi nahi Kali” was evocative. The scene based on Abhirami Andadi, with Devi creating the feel of a full moon even when it is a dark sky, in order to protect her devotee who by naming Amavasya as Paurnami had incurred the King’s displeasure, just did not register in the dance treatment. Similarly, the music in a variety of ragas like Revati, Athana, Bilahari, Mohanam, Arabhi needed pace changes as relief. Clearly a Bombay based — dancer and Delhi — based singer needed closer interactions. 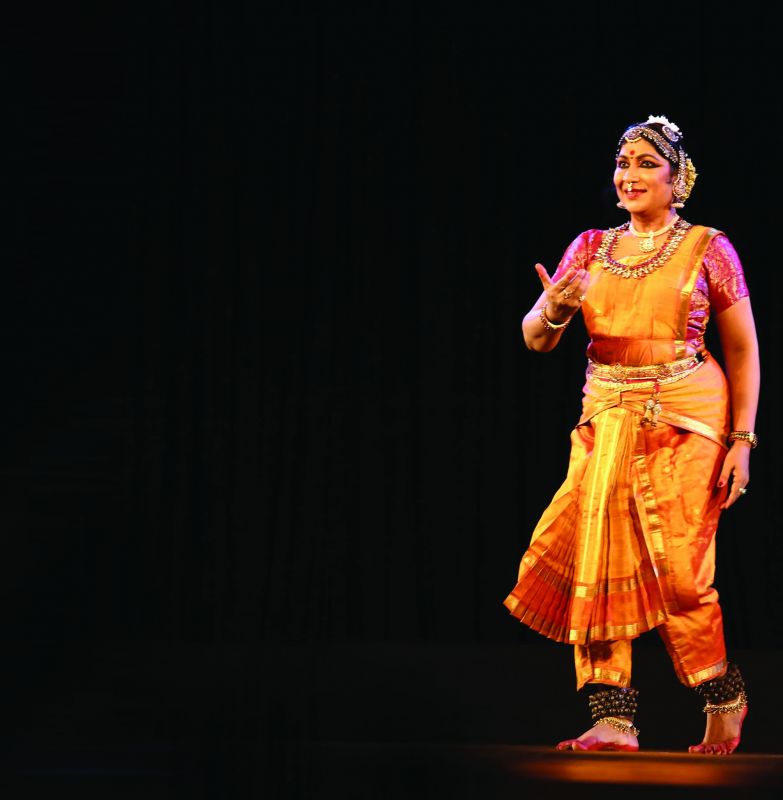 Vani Vak-Devi Saraswati as portrayed by Bengaluru’s Praveen Kumar was a highlight. Starting with Agastyamuni’s slokam Yakundendu tushara hara dawala, Praveen in muzhumandi squat began his salutation with lines from well-known lyrics on Saraswati artfully strung together — “Janani Ninuvina” in Reetigowla, “Hiranmayi Lakshmi Sada”, “Natajanapalini”, “Navarasakala”, to the popular “Varaveenamridupani”, the immaculate dance lines and body balance a pleasure to see. Singer B. Srivatsa’s chanting of the Rig Veda verses describing river Saraswati’s origin after the yajya, rang with an authentic power, obviously mastered under professionals. Movements caught the ecstatic flow of the river through different rhythmic combinations. Vak Devi Saraswati creating the Alphabet of letters from her head, ears, nose cheeks, teeth, mouth, to the strains of raga Kalyani, Saraswati presiding over art forms (sakalakalavisharade) conceived as part of the Spring festival, auspicious for youngsters initiated into various activities, set to music in Vasantha and Mohanam were all portrayed with dance expression exuding freshness and originality. And the Shankaracharya story wherein the Devi, pleased with his worship, informed him that she would follow him on his Yatra, while demanding that he not look back. At one stage, not hearing the anklet sounds, Shankaracharya looked back and the Goddess stopped at that place in Sringeri where the 8th century temple is built. Also the Aaputra episode of freeing the tethered cow meant for sacrifice, with compassionate Chintadevi Saraswati bestowing the Amuda Surabi on the devotee. Just having the veena as instrumental accompaniment was also very evocative.

With the 15-year Gurukul training, staying in Guru Kittappa Pillai’s home, Nartaki Natraj in her concept of Devi as Poorani, starting with Muttuswamy Dikshitar’s Kriti ‘Kamalambike’ in Reeti gowla invoking the supreme Tantric Divinity was not surprising. Her portrayal of Devi as martial VeerKorravai the protector or who is one half of Shiva, glowed with expressional involvement (the expertise of her compelling abhinaya specially sringar is what snuffed out the initial “third gender” snide remarks when she initially began performing). Bharatanatyam dancers rarely present Dasha Mahavidyas — showing Shakti in Tantric manifestations graceful and awesomely grotesque. Nartaki brought out in cameo fashion thumb sketches of Kali, Tara, Lalita, Bhuvaneswari, Bhairavi, Chhinnamasta, Dhumavati, Bagalamukhi, Matangi and Kamala.

A journey both visual and intellectual!