Art for the environment

An art installation at Kala Bhavan explains to visitors the importance of waste plastic segregation. 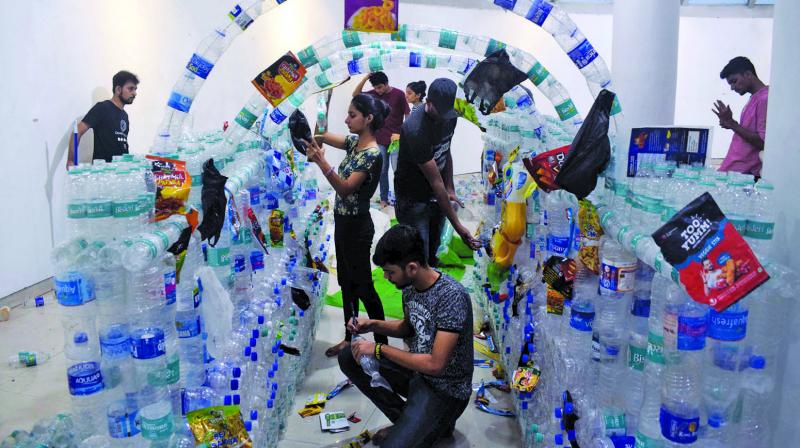 The ongoing exhibition of plastic and stone art is organised by Vesac India, TMC and University of Mumbai.

Although Mahatma Gandhi’s 150th birthday on October 2 is still away, Mumbai’s environment safety enthusiasts are already working to communicate his message — ‘be the change you want to see’.

A team of more than 80 students from two different colleges in Thane have constructed a tunnel-shaped art installation using domestic plastic waste, donated by residents. The five-and-a-half-foot installation is made of 18 thousand bottles and has an eight-foot-long walkway through which people can observe as the marine life and animals trapped in waste plastic. Spread over 20 feet, the installation highlights the importance of waste segregation and how the plastic we discard affects the environment.

“We have intentionally kept the entrance a little uncomfortable by making it smaller in size, as a metaphor to see how the environment is destroyed,” says Vijaykumar Katti, an environmental activist who is also the organiser of the event. Having learned the importance of the environment during his work involving safety-related activities, Katti is known for identifying available resources for people to contribute to a safer environment.

Over the years, the activist has been trying to spread awareness not just about recycling plastics, but also segregating them to make the recycling process easier. “People say plastic is bad but it is not; the way we throw plastic is bad. Plastic is equal to gold because it has better properties than other things,” says Katti, adding that instead of labelling it as bad, one needs to understand the proper ways to use it. 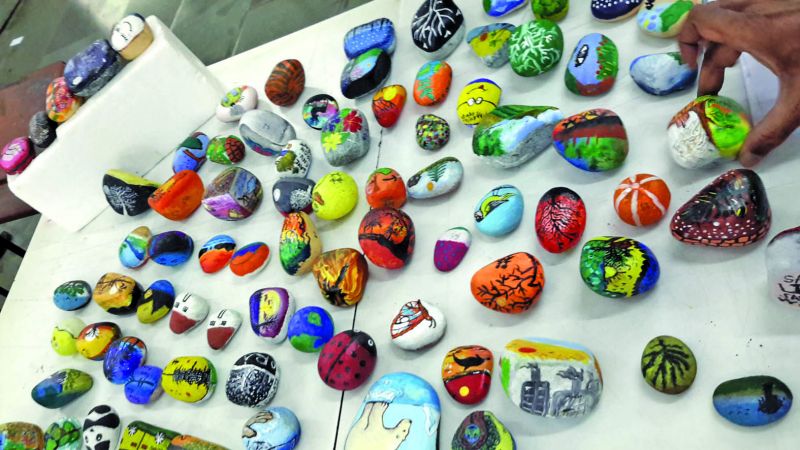 The ongoing exhibition of plastic and stone art is organised by Vesac India, TMC and University of Mumbai. And in 45 days, the team has created as many as 60 different installations based on marine life and its safety. According to Katti, 90 per cent of people have no awareness about how many types of plastic are in daily use, and explains that every plastic object has a mark that mentions its type, which is usually ignored.

“All the visitors have to bring waste plastic from their home, and I tell them if it can be recycled, depending upon the kind of mark it has. If we educate people, then they will use it properly. We need to segregate the waste plastic because it is a utility material. Instead of making it a compulsion, why not educate people about its use,” he opines. 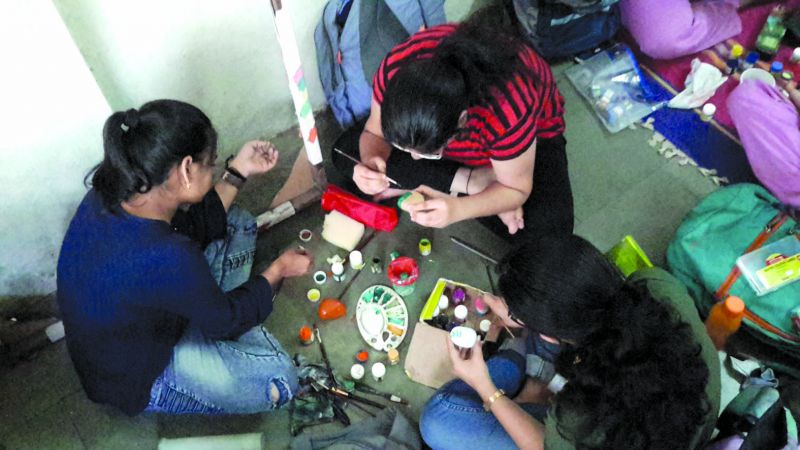 Among the team members is 18-year-old Hotel Management student Rohit Rajesh Gupta, who joined through a workshop conducted at his college. “It’s a public welfare activity, so I thought to participate. It is for the betterment of the earth, and I think we all need to be aware of it,” says Gupta, adding that such activities help create awareness among students and then they can take it further. Similarly, 20-year-old visitor Prathameshvar Umbare is excited to see a different use of plastic at the exhibition. “Seeing the plastic changes my view. We think this is a lame material, and just throw it after one use. I see a lot of useful things made of mundane things,” says Umbare, who made a globe through stone art.

By conveying the message of recycling and segregation through art, the organisers and students intend to create an environment of collective efforts towards the cause. “Only if the plastic is segregated can it be recycled and this can only be done through education. And art is the best way to teach because this creates interest among people,” explains Manisha Madan Pradhan, the pollution control officer from Thane Municipal Corporation.

Katti adds that collective effort is important. “Participation comes when you are involved in it. I am making people a part of it and letting them realise their belongingness can make a difference. It can come with collective efforts,” the activist says in conclusion.