'Fluffy' the great white shark heads back to sea

Several attempts were made to immediately return the injured shark to the sea, but it kept coming back to land. 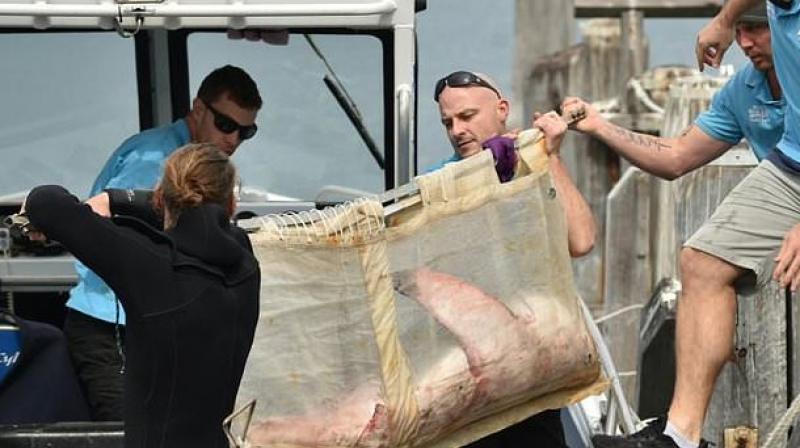 The shark, nicknamed "Fluffy", was released in the open ocean after being loaded into a tank of water on a boat. (Photo: AFP)

Sydney: A baby great white shark that stunned onlookers when it washed up on a popular Sydney beach was released back into the ocean Tuesday after spending the night in an aquarium.

The thrashing 1.5-metre animal, nicknamed "Fluffy" by marine experts, came ashore at busy Manly beach on Monday. "When you see a real-life shark, it's scary," Dan Korocz, who was at the beach with his young family, told the Australian Broadcasting Corporation. "I've got a four-year-old and a two-year-old and we went down to the water's edge and then it came in."

Several attempts were made to immediately return the injured shark to the sea by staff from the nearby Manly Sea Life Sanctuary, but it kept coming back to land. The Sea Life team then put the creature in a sling and carried it to a nearby rockpool -- attracting crowds of curious onlookers -- while they worked out what to do.

They later took the shark to the sanctuary, where its health was assessed and it made a good recovery overnight, said the centre's senior aquarist Robbie McCracken. "Fluffy" was finally released into the open ocean after being loaded into a tank of water on a boat Tuesday. "This animal is better suited to recovery out in its environment," McCracken told the Nine Network, adding it was "extremely rare" for a shark to beach itself. "These great white sharks usually are animals that would tend to be offshore a bit, out in the deeper, more unrestricted waters.

"This one for whatever reason found its way up into the beaches of Manly and then into the surf zone where it came into a bit of grief. That is where we were able to step in and sort of intervene."