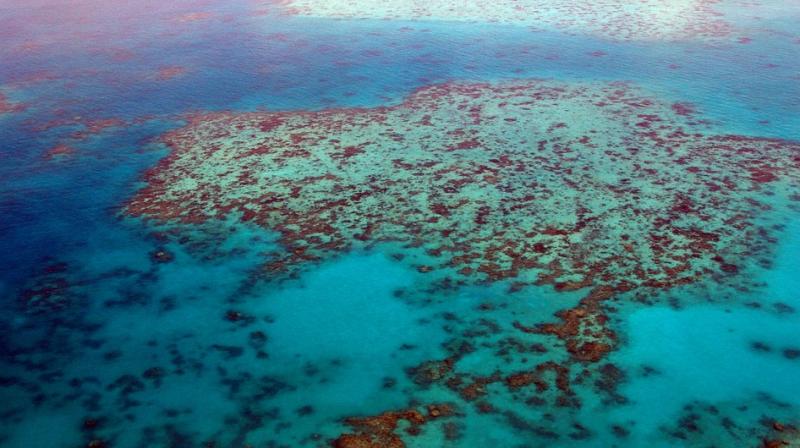 Several disturbances were recorded in the reefs, such as coral bleaching which caused rising of water temperatures. (Photo: Representational/Pixabay)

Global warming has hit the Australian corals hard and now, the world-famous Great Barrier Reef coral cover is reaching its record low. The decline has been found near the northern stretch of the reef.

A report by the Australian Institute of Marine Science showed that the coral cover in the region of Cooktown is at 14 per cent, which was a slight increase from last year, but still the lowest since the 1985, when the coral monitoring began, reported The Guardian.

Several disturbances were recorded in the reefs, such as coral bleaching which caused rising of water temperatures. There was also a crown-of-thorns starfish outbreak and the ocean spewing tropical cyclones caused the coral cover to decrease between 10 per cent and 30 per cent across the world heritage landmark in the past five years.

The report by the Institute also showed a glimmer of hope. It showed that individual reefs, along the Whitsunday Islands, still had lively communities and tiny, new corals were being discovered across the 2,300 km reef system. The density of the new corals gave hope that recovery of the coral loss was possible if there were no more disturbances in the ocean. “The important thing is the absence of further disturbances. If we have more coral bleaching events all bets are off,” said Mike Emslie, the Institute’s acting head.

In 2016 and 2017, the coral reefs were hit by back-to-back mass bleaching events due to heating up of the oceans. This results in the death of vast amounts of coral. A study by the ARC Centre of Excellence for Coral Reef Studies showed that 30 per cent of coral reefs died after the 2016 heat wave alone.

Scientists from the Intergovernmental Panel on Climate Change estimated that nearly 99 per cent of world’s corals will be under grave risk and will eventually be lost of the global warming crisis is left unaddressed and temperatures rise by 2 degrees Celsius.

Emslie noted that only the northern section was badly affected and the southern section had escaped the worst effects of coral bleaching and the 2009 cyclone. But of late, it has been affected by the severe crown-of-thorns starfish outbreak in 2017. That kind of starfish feeds on corals and spawns rapidly. The growth of this parasite has been attributed to nitrogen from fertiliser and pesticides that enter the ocean from agricultural run-off. This starfish had a particularly bad impact on the Swain Reefs National park. It reduced hard coral cover from 43 per cent 30 years ago, to 24 per cent now.

David Attenborough, natural historian noted that the change to Australia’s Great Barrier Reef was the clearest examples of the global climate crisis. He also remarked that it was extraordinary that despite solid proof, people in Australia are still in denial about the scale of the issue.

Australian Marine Conservation Society, an environmental group, showed that due to coral decline, the thousands of animals residing in the reefs are facing habitat loss. It also puts tourism at risk, with over 64,000 jobs on the line. “We need our governments to act fast,” said Shani Tager, the society’s spokesperson.