Do you know that humans are consuming plastic very week?

Humans are unknowingly consuming polymers every week through various sources. 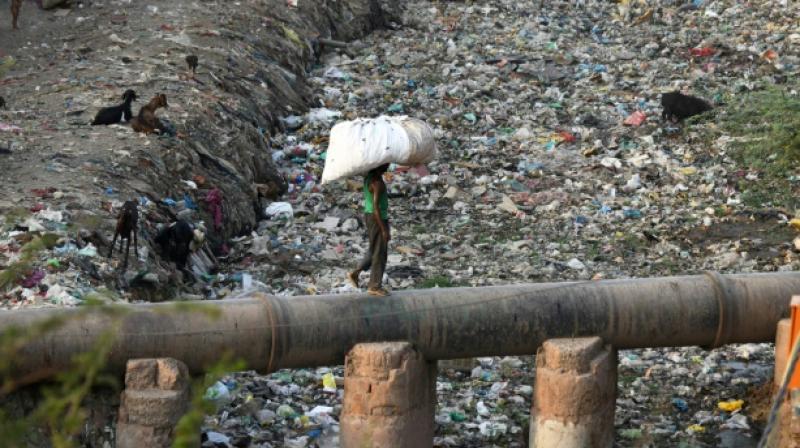 Not only are plastics polluting our oceans and waterways and killing marine life, it's in all of us. (Photo: AFP)

Washington: People worldwide could be ingesting five grammes of microscopic plastic particles every week, equivalent in weight to a credit card, researchers said Wednesday. Coming mostly from the tap and especially bottled water, nearly invisible bits of polymer were also found in shellfish, beer and salt, scientists and the University of Newcastle in Australia reported.

The findings, drawn from 52 peer-reviewed studies, are the first to estimate the sheer weight of plastics consumed by individual humans: about 250 grammes, or half-a-pound, over the course of a year.

Another study calculated that the average American eats and drinks in about 45,000 plastics particles smaller than 130 microns annually while breathing in roughly the same number.

"Not only are plastics polluting our oceans and waterways and killing marine life, but it's also in all of us," said Marco Lambertini, director general of WWF International, which commissioned the new report.

"If we don't want it in our bodies, we need to stop the millions of tons of plastic that continue leaking into Nature every year." In the last two decades, the world has produced as much plastic as during the rest of history and the industry is set to grow by four per cent a year until 2025, according to a new report by Grand View Research.

More than 75 per cent of all plastics wind up as waste.

A third of that – some 100 million tonnes – is dumped or leaches into Nature, polluting land, rivers and the sea. On current trends, the ocean will contain one metric tonne of plastic for every three metric tonnes of fish by 2025, according to The New Plastics Economy report, published by the Ellen MacArthur Foundation.

Plastic particles have recently been found inside fish in the deepest recesses of the ocean and blanketing the most pristine snows in the Pyrenees mountains between France and Spain.

The authors of Wednesday's report were up front about the limitations of their research, starting with the fact that little is known about health consequences. Gaps in data were filled with assumptions and extrapolations that could be challenged, though the estimates, they insisted, were on the conservative side.

They invited other researchers to build on their conclusions. "Developing a method of transforming counts of microplastic particles into masses will help determine the potential toxicological risks for humans," said co-author Thava Palanisami, a microplastics expert at the University of Newcastle.

Some experts remain sceptical about longterm impacts. "Based on the evidence that is currently available, I do not think that health effects of microplastics are a major concern," Alastair Grant, a professor of ecology at the University of East Anglia told AFP.

But that doesn't mean plastics isn't a major problem, he added. "What we do need is political and economic actions to reduce the amounts of plastic being disposed of into the environment and encourage recycling."

Media and watchdog reports have recently uncovered numerous cases of plastic waste from rich countries destined for recycling in poorer ones being dumped or burned instead.

"This is likely to have much more serious health effects than a rather small number of plastic particles in food and water," Grant said. The WWF said only hard targets backed by binding national commitments could hope to stem the plastics tide.

"The global goal must be to reduce plastic leakage into nature to zero," Eirik Lindebjerg, WWF's global plastics policy manager, told AFP. "We need a new, legally binding agreement to combat marine plastic pollution – it should be a stand-alone treaty like the Montreal Protocol or the Paris Agreement."

"Zero plastics" does mean no plastics used. But waste must be folded back into a circular economy, and plastics should no longer be made from fossil fuels, Lindebjerg added.