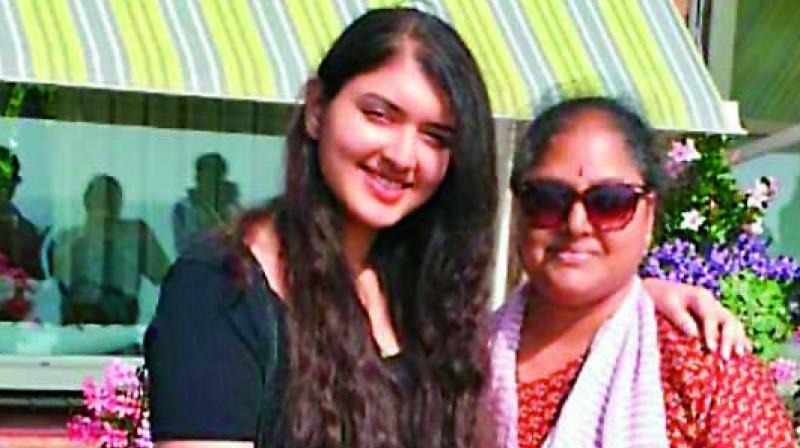 Urmila Gajapathi Raju with her mother

However, Urmila is yet to receive the required permissions from the Municipal Corporation authorities. She is hopeful to install the statue at least by the next year, though.

Urmila, who was recently appointed as the board member of the Maharaja Alak Narayana Society of Arts and Science (MANSAS) Trust by the Andhra Pradesh Government, is the daughter of Sudha and Anand Gajapathi Raju.

Anand had married Sudha after divorcing his first wife Uma. Incidentally, Uma’s daughter Sanchaita has been made the chairperson of the above mentioned trust!

Reportedly, the step siblings are not on the best of terms. Very little is known about Urmila and her mother as they stay away from publicity. She is currently pursuing graduation at Loughborough University in the UK. Soon after her graduation, she hopes to relocate to India, where she plans to deep-dive into social work full-time.

Recently, Urmila visited Vizag to take oath as the board member of MANSAS Trust as well as the chairperson of Simhachalam Devasthanam on a rotation basis — an event that was, however, postponed for some reason.

In an exclusive interview with Deccan Chronicle, she talks about her interests in continuing her family’s legacy of social work and to address the key issues in rural areas. She refuses to talk about the family disputes.

Had you anticipated on becoming a board member of the MANSAS Trust?
Honestly, being the daughter of Anand Gajapathi Raju, who was the MANSAS Trust founder, PVG Raju’s eldest son and former chairman, I always believed it’s my duty and right to be a part of the trust and Simhachalam Devasthanam.

I’m incredibly proud of the social service my grandfather initiated by setting up the trust for creating and managing educational institutions. My father carried forward his efforts by establishing the MVGR College of Engineering at Chintalavalasa in Vizianagaram.

To make that happen, my dad had taken a loan against his personal properties. He also made numerous other initiatives and dedicated himself towards the development of society. I hope to continue that legacy.

My father, always upheld the integrity of the MANSAS Trust and Simhachalam Devasthanam. He opposed the proposed digging of a tunnel through the mountain where the Simhachalam temple is located on because religious leaders stated that the feet of Lord Varaha Narsimha Swamy are located underground.

He ensured transparency and sincerity in every project related to the trust and Simhachalam Devasthanam, and I plan to do the same.

How do you view the state government’s decision on appointing Ms Sanchita Gajapathi Raju as chairperson of the trust?

I believe in the Government of AP, and I hope they will look into the matter of appointing the right chairperson.

The former chairman, your uncle, Ashok Gajapathi Raju went to court against this appointment. Are you also planning to challenge the government order?
Definitely, I will be a part of it once the case gets impleaded after the lockdown is lifted. I strongly feel Sanchaita is not the right person for that position.

What are your future plans? Does joining the state political affairs like your family members do feature anywhere in your plans?

I have been involved in social work since my school days, and I was awarded for the best social service two years in a row. I also make yearly donations to old age homes and orphanages.

My aim is to continue the social work set forth by my grandfather and my father. After my graduation, I plan on addressing the key issues faced in rural areas in and around Vizianagaram and Visakhapatnam.

The ongoing lockdown situation is unprecedented, and we find ourselves stuck in difficult times. We have donated monthly supplies and masks to households.
As for politics, if I were to enter it later on, it would only be to continue with the social work.