An evening of translated tales

The eleventh chapter of Readings in the Shed brought five German stories, translated into English, Hindi and Marathi. 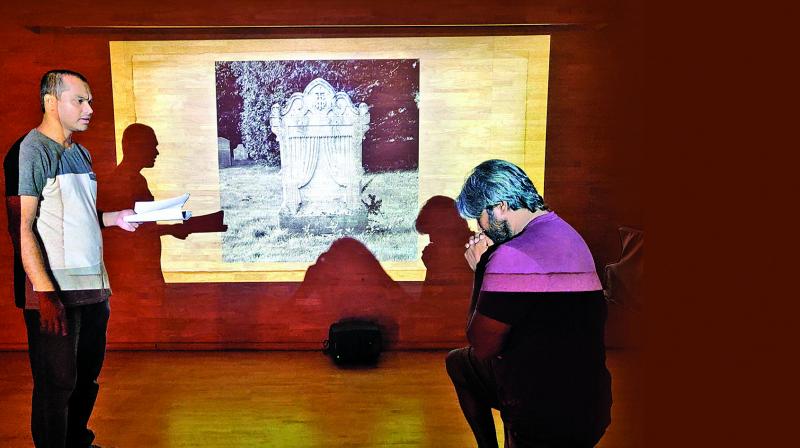 After completing ten chapters of various literary readings, the team of Readings in the Shed, hosted their new chapter, narrating five German stories.

After completing ten chapters of various literary readings, the team of Readings in the Shed, hosted their new chapter, narrating five German stories. Translated into English, Hindi and Marathi, the stories were read in an intimate set up at Goethe-Institute of Max Mueller Bhavan. With extensive and intriguing reading, the performers lead the audience traverse through the darkest era of Germany with both funny and pensive stories about the life and conflicts of wartime soldiers, struggling between duty and their identity.

“Like in our previous ten chapters, this evening too was intended to welcome the audience of story lovers. It’s an interesting opportunity to explore how languages carry stories and make them their own,” says Nikhil Katara, Director and Curator at Readings in the Shed.

In a two-hour long evening, three performers read five different stories. Translated by Ajinkya Lele and Leila Vennewitz, Heinrich Böll’s ‘Even children are civilians’ and Felicitas Hoppe’s ‘The Laugher’ were performed by the duo Nikhil Murali and Padma Damodaran. “I practiced for about 10 days with 3 rehearsals with the team and another week by myself to really familiarise myself with the text,” says Nikhil, who is also a corporate trainer and researcher in the healthcare space. “Besides the rehearsals together, we worked on the stories individually to get an in-depth understanding of the text,” adds Padma. A full-time performer for the last 15 years, Padma also read Herta Müller’s Humare Yahan Germany Main in Hindi, translated by Namita Khare.

As in any story, a reader comes across twisting plots and complicated characters, one must wonder how the language barrier would impact a story. Can translation help overcome them? Himali Kothari, the creative editor at Readings in the Shed, explains that translation is tricky, but it is also the only way for people to read stories written in different languages from around the world. “We were fortunate to get our hands on translations, which managed to bring out the essence of the original writer effortlessly, so much so that we almost forgot that these were not the original languages of the stories,” says Himali.

The course of the evening culminated with two other stories – Shaadi Ki Ek Raat - translated by Sudhanshu Shekhar - tale about a wedding party and all the incidents and emotions that erupt during the course of the night; another one was Saket Dekhne’s Marathi version of Dusara that delves into the workings of a suspicious mind. Performed by Akshay Shimpi, both the stories shared the common theme of complex human relations. “I was interested to know how the English speaking audience would absorb and respond to storytelling in Marathi and Hindi. And it’s a great experience overall,” says Akshay.  A healthy translation of the stories with the right selection of words, shouldering their history and legacy made the tales sound like a wonderful amalgamation of both the cultures.

The ancient art form of storytelling has evolved into full-fledged plays in the contemporary world, however, listening to these strong performances, one can visualise the drama in their mind. “Storytelling allows the audience to experience the written words along with an element of performance that adds to the drama of the piece,” says Nikhil. When asked about storytelling contrary to full-fledged plays, Padma insists, that it’s not easy to put up a play, “Moreover all stories are not made for the stage. Yet they need to be told, and this is one way.” According to Akshay, storytelling, readings and plays are different but do share similarities - all bridge the gap between the stories and the audiences. “In plays, the audience sees the story through the character and in readings the story is heard in the performer’s voice and the audiences visualise the story with their imagination,” concludes Akshay.