Play, With your food

A first-of-its-kind immersive theatrical dining experience invites city dewellers to be part of a play as they dine. 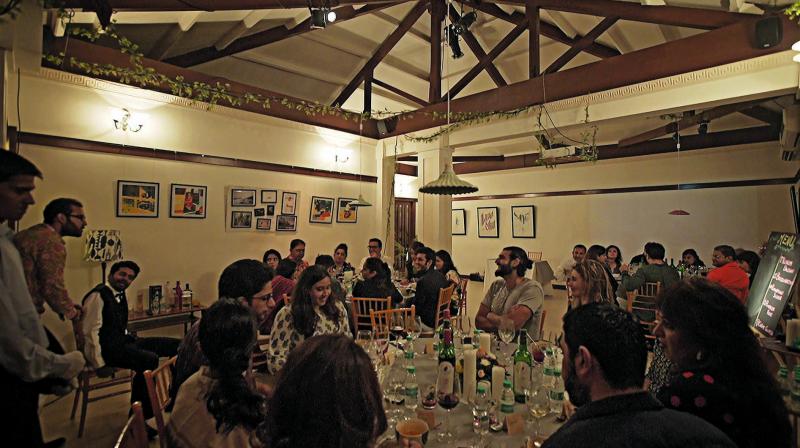 Diners interact with the play’s characters during The Lost Supper

Have you ever visited a restaurant and found yourself being greeted and served by characters from a play instead of the customary waiter? This is exactly what you will encounter at The Lost Supper, a first-of-its-kind immersive theatrical dining experience put together by PaChaak, a group that marries storytelling with gourmet dining. The Lost Supper, an original work written by Sarat Rao and Appalaa Bhattacharrya, tells the story of a woman who loved her restaurant so much that she returns from the dead to protect it from greedy men with hungry pockets.

“In the process, the play touches upon a host of themes, like corruption within the real estate industry, waiter-boss relationships, possession-exposé attempts and Artificial Intelligence, while there is also a healthy dose of romance,” shares Divya Rani, director of the play. However, though the play deals with heavy themes, it doesn’t take centre-stage in the experience because the spotlight is shared equally with food. Since the play revolves around a Goan restaurant, visitors are treated to a five-course meal of Goan gourmet fusion dishes, whipped up by chef Onkar Samarth. “The food beautifully complements the play. Even the set-up that is chosen for the event has a vintage vibe and is reminiscent of Portuguese-era establishments. The ambiance makes the diner feel like she is actually a part of the story that is unfolding,” adds Divya.

And this experience of feeling like you’re a part of the play is exactly what immersive theatrical dining is all about. In this sort of dining experience, there is no fourth wall, because the play unfolds around you and the act of dining is seamlessly woven into the play.  “There is no stage, so you are a part of the experience from the time you walk in. Also, there is a lot of interaction between the cast and the diners. In fact, the play’s progression is impacted by the answers given by the diners during the course of the meal. So, although we have a script, there is enough room for spontaneous modifications,” shares Divya. The director also insists that this concept is entirely new, since even ‘supper theatre’, which is popular in London and New York and combines eating with viewing a play, separates the audience from the performers. “There is still a ‘stage’ that exists. Nobody has tried to integrate food into the play.”

When asked what inspired her to explore this novel format, Divya says that it was a conversation in a coffee shop that led to the brainwave. “I was talking to a friend who wanted to make a grand musical, but didn’t have the budget for it. That’s when I thought, ‘why not set the play around food-laden tables’? Indians love food, and people will at least come for the good food, if not for the play!” says Divya with a chuckle.  However, working with a concept that’s entirely new comes with its own set of challenges and so the actors have to train very differently for this play. “In conventional plays, the actors have total control over the script and by extension, the audience. Nobody interrupts you and distractions are minimized because of the stage-seating divide. However, for an experience to be immersive, you have to let go of control and involve the audience in the play. So we train with a lot of distractions and learn to work with them,” Divya says, and also shares how once, one of the diners almost revealed the climax of the play, but the actors deftly dealt with the slip and succeeded in keeping the audience gripped.

Though the play has seen one performance in Mumbai, while another is scheduled to happen on April 13, Divya says that the aim is not to stay confined to one city, but to travel across India, exposing different city-dwellers to the experience. “We are in talks to host shows in Goa, Bangalore and Delhi, and then come back to Mumbai,” says Divya. As for what people should expect from the experience, Divya says that one should come with an empty stomach and an open mind. “Coming with no expectations is the best way to experience this offering. Each one will go away with a different takeaway, so your experience is yours alone to cherish,” concludes the director.