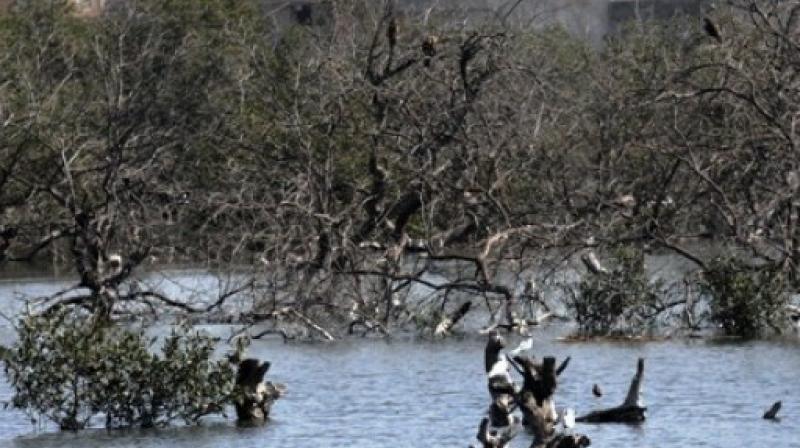 Mangrove eco-systems are rich in biodiversity and provide a number of ecological services (Photo: AFP)

New Delhi: India's total mangrove forest cover has increased by 181 sq km, according to the latest assessment by the government.

The extent of bamboo-bearing area in the country has been estimated at 15.69 million hectares, said the India State of Forest Report 2017 released today.

In comparison to the assessment done in 2011, there WAS an increase of 1.73 million hectares in bamboo area, the report said. According to the report, the total mangrove cover stands at 4,921 sq km and has shown an increase of 181 sq km.

Mangrove eco-systems are rich in biodiversity and provide a number of ecological services.

The report said that all the 12 mangrove states have shown a positive change in the mangrove cover, as compared to the last assessment in 2015."The growing stock of the bamboo in forest has been estimated to be 189 million tonnes.

There is an increase of 19 million tonnes in the bamboo-growing stock as compared to the last assessment done in 2011," the report said.

The government has recently enacted a bill in Parliament for taking out bamboo from the tree category, where it is grown outside forest areas.

This has been done to encourage people to grow bamboo on private lands, which will be helpful in increasing the livelihood opportunities for farmers and also enhance the green cover and carbon stock of the country.

The total carbon stock in the country's forest is estimated to be 7,082 million tonnes, which shows an increase of 38 million tonnes, as compared to the previous assessment.

Union environment secretary C K Mishra pointed out that the economic value of the forests must be realised and forests should be used economically.

He emphasised that the value of forests is more for the people living in and around forests; hence the most critical issue is for whom is this exercise being conducted.

Forests do not exist in isolation and the benefits of the forests must be transferred to the people," he said, while stressing that issues related to agro-forestry and degraded forests must be paid attention to.