It’s not easy to preserve the vignettes of history and archive them for the coming generation without any formal training or help. 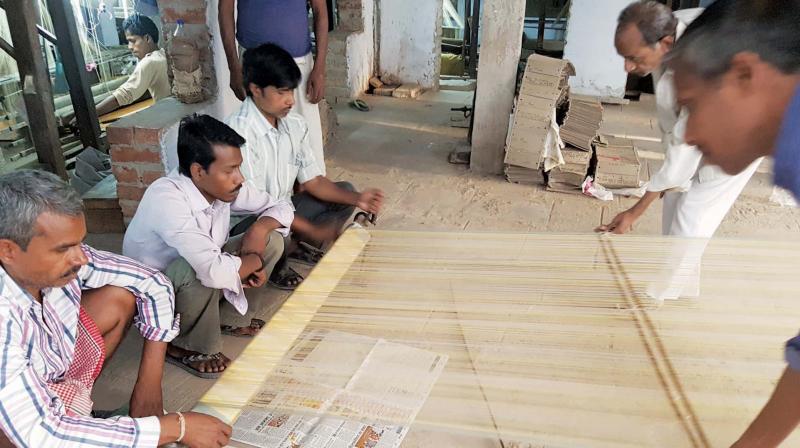 The designer uses natural yarns of cotton and silk, its derivatives or the combination of both and pure silver and gilded gold for zari work to create saris.

It’s not easy to preserve the vignettes of history and archive them for the coming generation without any formal training or help. Although, for Mumbai-based designer and revivalist Smriti Morarka, reviving the old fabrics from Banarasi looms through her sari brand Tantuvi was not just a challenge, but also a passion she inherited from her family.

Growing up in Rajasthan, Smriti was exposed to a lot of handlooms from an early age. Her family also collected a fair amount of textiles, ranging from old to new; and heavy to fragile. Being surrounded by such beautiful artworks, it was natural for her to foray into revivalism. Sharing about her inspiration, she says, “I have a little blouse that belongs to my grandmother, and later my daughter and I wore it at some stage as well. It has beautiful embroidery that looks like a piece of art, and more importantly, it has sentimental value for us. So, when I look at all this artwork around me I feel it was very logical for me to get into this sector to do something around the revival and preservation of handloom work.”

However, it was Smriti’s trips to Varanasi where her mother had established Jnana Pravaha, an institute for cultural studies, which lead to the formation of her brand in 1997. During these visits, she met many artisans and weavers, and it was this influence that turned her passion into a business of Indian handloom textiles.

Through Tantuvi, the designer is not only bringing to fore the zari laden Banarasi saris, but also trying to maintain the authenticity of the original craftsmanship. To maintain this exclusivity, the designer uses natural yarns of cotton and silk, its derivatives or the combination of both and pure silver and gilded gold for zari work to create saris in a limited number. This helps in providing support to the local zari industry and ensures exclusivity by not falling for mass production and commercialisation. “After having a dialogue with the weavers, I realized that although the challenge lay in reviving the weaving traditions of the old, it was even more difficult to make the product both marketable and affordable. However, I felt confident that there was enough sensitivity around and if I ventured to expose and explain those textiles, I was hopeful that people would respond and a demand for such items could be created,” she reveals.

Even though, the traditional Indian wears are trending among the millennial, Smriti feels that the buyers need to be more aware of the authenticity of the products. “Nobody wants to ask questions that involve the making of the garment. We need to change our attitude towards buying products, just because it looks like khadi doesn’t mean it is khadi. As a designer, I want people to actually look for quality before they buy instead of just looking at the label,” she rues.

She further goes on to explain the extensive procedure of making a sari that can easily consume four to five months for one sari. While designing itself takes a lot of time, the looms don’t start working by January and don’t yield by September. Moreover, the commission for the zari artisans start at Rs 20,000-30,000 and stretches up to Rs 60,000-90,000.

As the mentioned hard-work put in by Smriti and her team becomes evident in the saris, what is completely startling is that all that becomes possible despite her having no formal training in fashion designing. It is perhaps why she even likes to maintain a low profile in the business. “I don’t have formal training in fashion, and I feel that I have no business doing what I do because I am not a textile designer. I am a student of History and I am here to keep the history alive. I also happen to paint, which is coming very handy now because I can design saris with the help of art that I have learned on my own over a period of time, ” she reveals.

Having worked several years now, Smriti possesses the knowledge of the know-how of Banarasi saris, and in future would like to pass it on to her daughter. She concludes, “ My daughter has an eye for detail and someday I would want her to take forward all my designs and textile information that I have archived.”