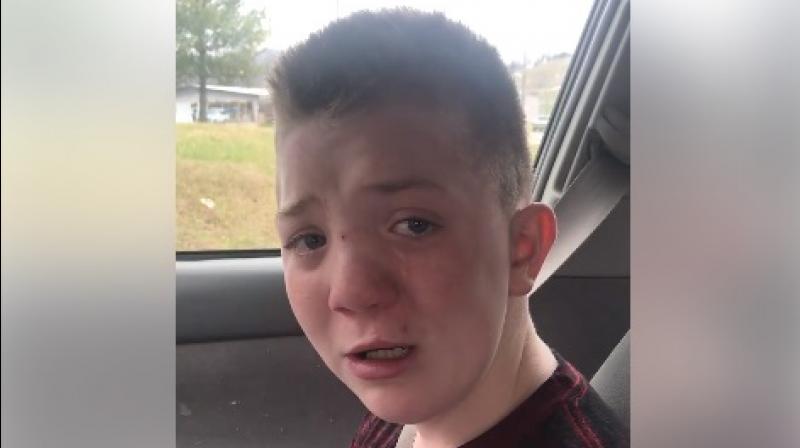 A heartbreaking video of a young boy pleading to be left alone by bullies has gone viral with celebrities offering him their support. (Photo: Facebook/ Kimberly Jones)

'They make fun of my nose. They call me ugly. They say I have no friends':

A heartbreaking video of a young boy pleading to be left alone by bullies has gone viral with celebrities offering him their support.

Keaton Jones, of Knoxville, Tennessee, asked his mother, Kimberly Jones, a question that so many people would like an answer to.

In the video, Jones is seen asking his mum, “Just out of curiosity, why do they bully? What's the point of it? Why do you find joy in taking innocent people and finding a way to be mean to them,”

Keaton can be seen asking his mother this tough question through tears. 'It's not okay,' he said.

His mother can be seen asking, “What did they say to you?”

“They make fun of my nose. They call me ugly. They say I have no friends,” Keaton answered as tears poured from his eyes.

His mum went on to ask, “What did they do to you at lunch?” To which Keaton replied: “Poured milk on me and put ham down my clothes. Threw bread at me.”

In the video, Keaton said it's not just him, but others are bullied by kids at school.

He further told his mother, “People that are different, don't need to be criticized about it. It's not their fault. If you are made fun of just don't let it bother you. Stay strong I guess. It's hard.”

“But it'll probably get better one day,” Keaton concluded.

The tear-jerking confession has captured more than 16 million hearts on Facebook after his mum Kimberly Jones posted it.

The post which has received over 160 thousand replies saw Kimberly writing, “For the record, Keaton asked to do this AFTER he had he me pick him up AGAIN because he was afraid to go to lunch.”

She further added, “My kids are by no stretch perfect, & at home, he's as all boy as they come, but by all accounts he's good at school. Talk to your kids. I've even had friends of mine tell me their kids were only nice to him to get him to mess with people. We all know how it feels to want to belong, but only a select few know how it really feels not to belong anywhere.”

The post saw responses from the likes of Dr Phil, who offered to walk the halls of his school with him and sit down and eat lunch.

Donald Trump Jr. also weighed in to offer his support after UFC chief Dana White told Keaton that he would be welcome to visit the organizations headquarters in Las Vegas.

Trump Jr. offered Keaton and his family a place to stay if they accepted White's offer.

The video has garnered more than 418,000 shares on Facebook, even reaching the eyes and ears of several celebrities who have tweeted their support for young Keaton, including Stranger Things star Millie Bobby Brown.

Brown posted, “Keaton, this is so accurate. Why do people do this? I think your sooo cool Keaton! I wanna be your friend ( but srsly) ur freakin awesome [sic]' Brown tweeted.”

Brown then tweeted at Keaton's sister, Lakyn Jones. “Tell him to stay strong! Truly a great person... to all the bully's: take not from Keaton.”

Tennessee Titans football star Delanie Walker offered Keaton tickets to an upcoming game, and even recorded a video of himself reading a poem just for Keaton.

Keaton is an inspiration to the more than 3.2 million students who fall victim to bullying each year.

You can see the video here: