Police registered cases against 10 people for hitching bullock with horse on same cart, causing pain and suffering to both animals. 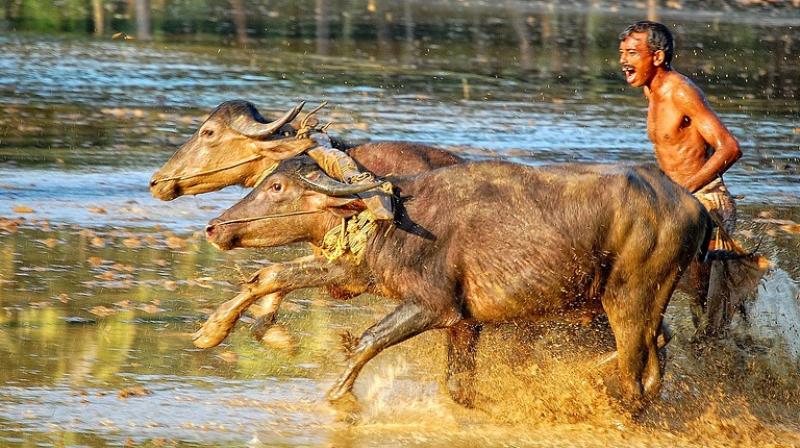 Aurangabad: When People for the Ethical Treatment of Animals (PETA) India learned that a bull race was scheduled to take place on September 10 on Aurangabad -Jalgaon National Highway, near Sillod village, the group sprang into action and worked with district authorities to stop an illegal race from taking place.

The police registered cases against 10 people for offences such as hitching a bullock with a horse on the same cart, causing uneven pressure and unnecessary pain and suffering to both animals in apparent violation of the Prevention of Cruelty to Animals (PCA) Act, 1960. The charges also include beating animals with nail studded sticks to force them run faster.

"The Supreme Court has made clear bullock cart races are illegal and there is no place in civilised society for beating bulls with sticks and stabbing them with nails to force them to run", says PETA India Emergency Response Coordinator, Meet Ashar. "We commend Aurangabad district authorities for enforcing the law and holding those who are responsible for these animals’ misery accountable”.

PETA notes that during races, bulls are often beaten mercilessly with wooden sticks that are spiked with nails in order to get them to run in the sweltering heat and that the painful twisting and biting of their tails is common. Such events are also a threat to public safety.

What’s more, the Prevention of Cruelty to Draught and Pack Animals Rules, 1965 recognises bullocks and horses can be used as draught animals and their use for work using a cart is permitted only when two animals of the same species are hitched together.

As a draught animal, a horse can be made to pull a load only using the chest area. Unlike bullocks, they do not have padding of fat and muscles to bear the weight and pull it using their neck. Because of the dissimilar anatomical built-up, the pace and speed of motion are completely different for both bullocks and horses, and when a horse and a bullock are hitched to same cart, they are both made to suffer in apparent violation of the PCA Act, 1960.

In October, in response to a Public Interest Litigation (PIL) filed by Ajay Marathe, in which PETA India filed an intervention application, the High Court of Bombay passed an order stating that it's bound by the observations and views of the 2014 Supreme Court judgment that banned bullock cart races across the country and stayed the operation of the Prevention of Cruelty to Animals (Maharashtra Amendment) Act, 2017, which aims to allow bullock cart races in the State.

The High Court pointed out that the Supreme Court has categorically stated that bulls are not anatomically suited to racing.

In September 2017, PETA India filed a petition in the Supreme Court seeking its direction to strike down the state law that aims to legalise bullock cart races and the matter will be heard by a Constitutional Bench.