Mandakini Shinde a parent of a 13-year-old student from Santacruz believes that cyber crime training should be included in their regular curriculum. 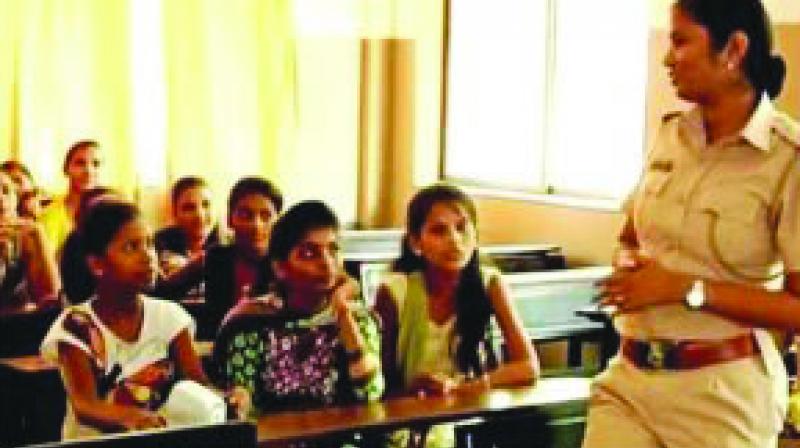 In order to create awareness about social media crimes, Mumbai police has extended its ‘Police Didi’ campaign to include sessions on social media harassment.

Earlier this year, when a class nine student from Santacruz School was harassed for months by a nameless and faceless user on the Internet, it became a wake-up call for Mumbai Police to revamp their earlier launched campaign ‘Police Didi’. The teenager who uploaded her selfies on social media was threatened and harassed by a user who created morphed images using her selfie. Although the man was arrested after the survivor filed a complaint, the Mumbai police decided to take action on the root cause. As a result, the female police officers of the crime branch are taking cyber awareness sessions at various schools and colleges in the city, educating them about online threats.

“It is an extension to the ‘Police Didi’ campaign and we are trying to touch all the aspects through which a child might face harassment. It is important to educate them about social media crime as well,” says port zone deputy commissioner of police, Dr. Rashmi Karandikar. She also informs that earlier the campaign was only for the BMC schools, however, now this will be implemented at all the private and society schools.

Introduced in 2016, in response to several cases of sexual harassment at schools across the city, the ‘Police Didi’ campaign initially saw women police officers counselling school students about ‘good touch and bad touch’ and how they can speak against it. And since the social media stalking has become a brutal reality, the Mumbai police has extended its school programme to teach teenagers how to be safe from social media harassment.

“We are making the students aware about cyber crime from the very initial level. We have handled almost 250 cases this year. We take sessions on how they can use social media carefully. We make them aware about their safety and which website they should open and which isn’t right to access,” says senior inspector Meera Bhansode, of the crime branch.

Mandakini Shinde a parent of a 13-year-old student from Santacruz believes that cyber crime training should be included in their regular curriculum. “I think it is a good move. We can’t stop our kids from using the phone or social media, because they need that for multiple reasons. I think along with these sessions, social media awareness course should be included in their curriculum. But they should do it with the help of a clinical physiologist or a psychiatrist,” she insists.

To which the deputy commissioner informs that all the police officers involved in the campaign have been trained and as an extension, they are training all the school principals across the city. “There is an entire team involved. We have psychologists, psychiatrists, NGOs and judicial academicians to train the officers and now these officers are training the principles through different workshops,” assures the officer.

Sanpada resident Shailesh Mugal who is a father of two school-going girls appreciates the campaign, as he believes it will make the kids aware of inappropriate behaviour. “It is a good initiative. I believe every parent would support this. There are a lot of incidents happening these days and if kids are aware about the inappropriate behaviour of other people then they can communicate openly with the parents,” says Shailesh, who also urges that the team of police officers should not go in the school in their uniform rather they can talk to the children in civilian dress. “Generally kids are scared of police and if they make it instructive then the kids won’t take this as positive learning. It should be in a playful manner and they should assure the kids that if anything wrong happens police is their friend and not an enemy,” he suggests.

Keeping the parents’ concern in mind, the campaign too is designed to be easy-going for the children, and rather using the conventional training methods, these police didis use jovial ways to communicate. “We use our own insights to make them aware. We are trained to deal with all kinds of people and we know a child’s mind is very sensitive and so as teenagers’,” says the senior inspector.

Although it is a good move and the Mumbai police have already earned a green signal from the parents, clinical psychiatrist and the founder of The Freemind initiative, Alpes Panchal believes that the training should be more entertaining for young adults. “It is difficult to impart any education in young adults because they are in the rebellious age group. So it needs to be friendly and interesting. It can be done through video clips because they like watching them and that’s how the information can be imparted nicely. The way of imparting knowledge about the issue should be innovative,” suggests the psychiatrist.