Bade Miyan Deewane, the play that is clocking ten years, is based on noted Pakistani novelist Shaukat Thanvi’s Budbhas. 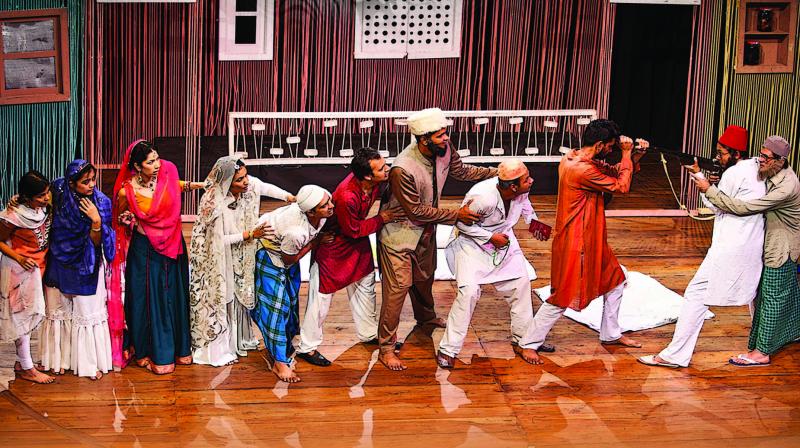 Although the play has been running for 10 years, the cast has changed over the time, with Rasheed being the only one from the original cast.

The play Bade Miyan Dewaane starts with a resounding song, the lyrics of which go by, ‘Kehte hain ishq naam ke guzre the buzurg, hum log bhi ushi silsile ke hai’. What you may consider a quip hidden in the Hindustani lyrics is actually the theme apparent of the play that is clocking ten years now. Since it’s first staging in 2010, Rangbaaz’s musical romantic comedy play Bade Miyan Dewaane, with it’s slightly bizarre, and a whole of funny plot, have had almost 80 shows in the country.

The actor, writer, and director of the play, Imran Rasheed, who adapted it from Shaukat Thanvi’s novel Budbhas, reveals the premise of the play. “The story is about Meer Sahab. He is very old in age and is a nawab. He falls in love with a young girl, Suraiya, from his mohalla. He gets mad about her, and through a mediator Shaukat, he extends his hand in marriage to the girl’s family. But, the twist is, that his son Tabish, is also actually in love with her, about which the Meer Sahab does not know. There are also two characters of tawaifs, who manipulate and exploit Meer Sahab in the process. So the whole play revolves around this,” he says.

At first glance, the plot of the play might not suit everyone’s taste, and the protagonist-antagonist Meer Sahab might cause aversion in thought, but Rasheed assures that the eccentric character is far removed from immorality. “Meer Sahab is a villain. But, the public still connects with him because woh badi masoomiyat ke saath ishq mein mukhtalah hai. He is madly and passionately in love with her. With age, your desires don’t die. People who grow old, sometimes, have to control their wishes and desires, but that does not mean that their desires are not there. So Meer Sahab is one of those, who’ll do whatever he wants to do. He wants to live his life to the fullest,” explains Rasheed.

Hence, what follows is a hilarious plot line, with an unassuming Shaukat in the middle of everything. The character of Shaukat, who Rasheed has based upon the novelist of the same name, further acts as a catalyst in the absurd hilarity of the play. “The interesting thing about Shaukat is that he is a writer. Now, Shaukat has a thing that before writing about a person who has become the subject in his writings, he strikes a close friendship with them.  So this time, he has chosen Meer Sahab. But once he starts getting involved in his life, and his affairs, somewhere in the middle, he realises how entrapped he has become,” he reveals, pointing out the development that kin of Suraiya, actually, want her to marry Shaukat. This leads to confusion, misunderstandings, and jealousy, which add to the hilarity of the play. In addition to these primary characters, the secondary characters add charm to the narrative. Taking the setting of a mohalla a little ahead, Rasheed incorporates eccentric characters that he has actually come across while living in such small neighbourhoods.

Although the play has been running for 10 years, the cast has changed over the time, with Rasheed being the only one from the original cast. “The original cast comprised of Akarsh Khurana, Purva Naresh, Sumit Vyas, and others. Over time, the cast changed, but the show never stopped. People still have the same energy and the same enthusiasm about the play,” says Rasheed before adding that the best thing about the play is that it has always lived up to its reputation.
—The show will be held at St. Andrew’ s Auditorium, Bandra on July 13, from 7:30pm onwards.