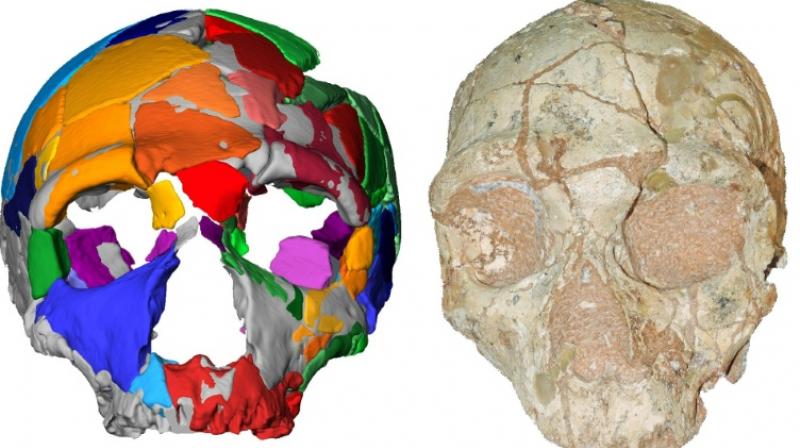 Hominins – a subset of great apes that includes Homo sapiens and Neanderthals – are believed to have emerged in Africa more than six million years ago. (Photo: AFP)

Washington: A 210,000-year-old skull has been identified as the earliest modern human remains found outside Africa, putting the clock back on mankind's arrival in Europe by more than 150,000 years, researchers said Wednesday.

In a startling discovery that changes our understanding of how modern man populated Eurasia, the findings support the idea that Homo sapiens made several, sometimes unsuccessful migrations from Africa over tens of thousands of years.

Southeast Europe has long been considered a major transport corridor for modern humans from Africa. But until now the earliest evidence of Homo sapiens on the continent dated back only around 50,000 years.

There has however been a number of discoveries indicating the ancient presence of Neanderthals -- an early human cousin -- across the continent. Two fossilised but badly damaged skulls unearthed in a Greek cave in the 1970s were identified as Neanderthal at the time.

In findings presented in the journal Nature, an international team of researchers used state-of-the art computer modelling and uranium dating to re-examine the two skulls. One of them, named Apidima 2 after the cave in which the pair were found, proved to be 170,000 years old and did indeed belong to a Neanderthal.

But, to the shock of scientists, the skull named Apidima 1 pre-dated Apidima 2 by as much as 40,000 years, and was determined to be that of a Homo sapiens. That makes the skull by far the oldest modern human remains ever discovered on the continent, and older than any known Homo sapiens specimen outside of Africa.

"It shows that the early dispersal of Homo sapiens out of Africa not only occurred earlier, before 200,000 years ago, but also reached further geographically, all the way to Europe," Katerina Harvati, a palaeoanthropologist at the Eberhard Karls University of Tuebingen, Germany, told AFP.

"This is something that we did not suspect before, and which has implications for the population movements of these ancient groups." Apidima 1 lacked classic features associated with Neanderthal skulls, including the distinctive bulge at the back of the head, shaped like hair tied in a bun.

Hominins – a subset of great apes that includes Homo sapiens and Neanderthals – are believed to have emerged in Africa more than six million years ago. They left the continent in several migration waves starting about two million years ago.

The oldest known African fossil attributed to a member of the Homo family is a 2.8 million-year-old jawbone from Ethiopia. Homo sapiens replaced Neanderthals across Europe for good around 45,000-35,000 years ago, in what was long considered a gradual takeover of the continent involving millenia of co-existence and even interbreeding.

But the skull discovery in Greece suggests that Homo sapiens undertook the migration from Africa to southern Europe on "more than one occasion", according to Eric Delson, a professor of anthropology at City University of New York.

"Rather than a single exit of hominins from Africa to populate Eurasia, there must have been several dispersals, some of which did not result in permanent occupations," said Delson, who was not involved in the Nature study.

Harvati said advances in dating and genetics technology could continue to shape our understanding of how our pre-historic ancestors spread throughout the world. "I think recent advances in palaeoanthropology have shown that the field is still full of surprises," she said.