Simply owning something makes your mind think it is worth more! 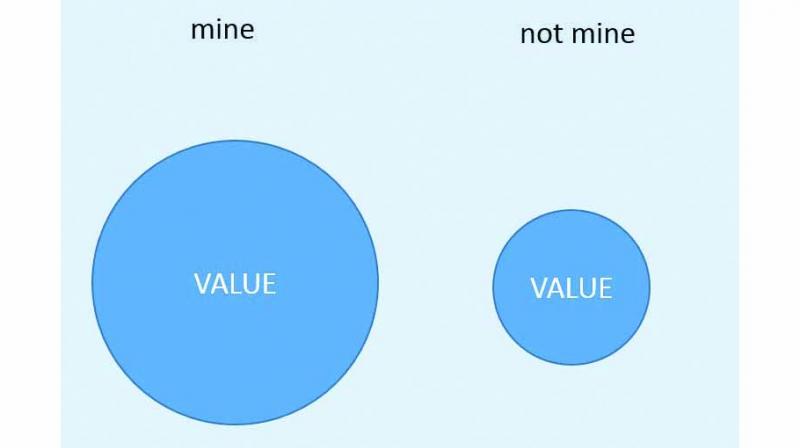 This was once analysed using a simple experiment.

You come across a laptop bag and think it is worth paying rs 1000 for it. Say you buy it. A friend approaches you and asks what price you would be willing to sell it for. Many may think of Rs 1000 or lesser, but real-life scenarios tell a different story. Owners of the bag, or any object for that matter, are likely to sell only at a higher price than what they initially considered it worth. Simply owning something makes your mind think it is worth more!

This was once analysed using a simple experiment. Two separate gifts were prepared, a chocolate bar and a coffee mug, and randomly distributed to each attendee at a conference. Then, each attendee who was given a chocolate bar was approached and asked whether they would be willing to exchange it for the coffee mug. Most of them were not interested in the exchange. The same negative response was observed from coffee mug owners. Merely owning the chocolate bar probably made people think it is better than the coffee mug and vice versa.

This tendency to assign a higher value to things you own is called the endowment effect and it has interesting effects. It plays a role in causing disputes in scenarios where the government tries to acquire land for a highway from individual land owners. The land owners value the land they own more, and often much more than the market price, which is the price that the government may be willing to pay as compensation. Also in some reality game shows, instead of offering the participant a cash prize at the end, they are given a big sum of cash at the beginning for agreeing to participate in the show. As the game proceeds, the participant needs to play well to keep the cash prize and loses some of the cash on making a bad move. Just by switching the game from a money-earning game to a money-losing game, the endowment effect is made to work, and that makes it more stressful for the participant and exciting for the viewers!