Dinosaurs for sale in Paris as they become trendy decorative pieces 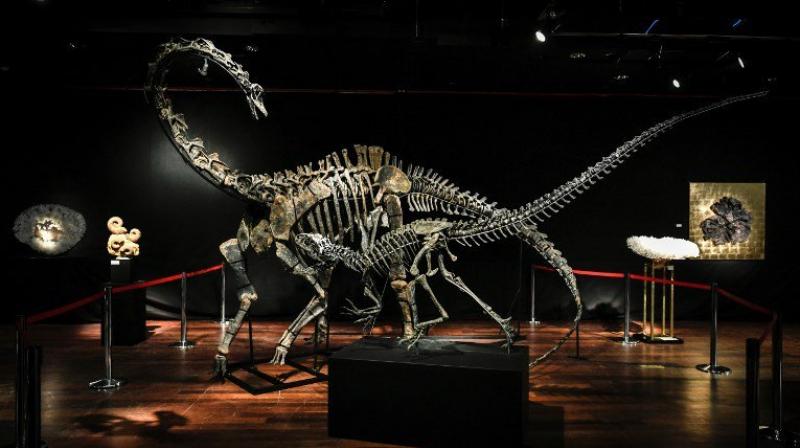 Dinosaur bones are increasingly gracing collectors' cabinets, with another huge skeleton, that of a theropod, expected to fetch up to 1.5 million euros ($1.84 million) when it goes up for auction in June. (Photo: AFP)

Paris: The skeletons of an allosaurus and a diplodocus are up for auction in Paris this week, marketed as hip interior design objects -- for those with big enough living rooms.

"The fossil market is no longer just for scientists," said Iacopo Briano of Binoche et Giquello, the auction house that is putting the two dinosaurs under the hammer on Wednesday.

Cage, however, did hand back the rare skull of a tyrannosaurus bataar, a close cousin of T. rex, that he bought in 2007 after it was found to have been stolen and illegally taken out of Mongolia.

Dinosaur bones are increasingly gracing collectors' cabinets, with another huge skeleton, that of a theropod, expected to fetch up to 1.5 million euros ($1.84 million) when it goes up for auction in June.

"For the last two or three years the Chinese have become interested in palaeontology and have been looking for big specimens of dinosaurs found on their soil, for their museums or even for individuals," Briano said.

The new buyers are now bidding against multinational corporations as well as ultra-rich Europeans and Americans, the "traditional" buyers of dinosaur skeletons, Briano added.

In 1997, McDonald's and Walt Disney were among donors stumping up $8.36 million to buy Sue -- the most complete and best preserved Tyrannosaurus rex ever found -- for the Field Museum of Natural History in Chicago.

"Millions of people come to see it, it's incredible publicity for companies," said Eric Mickeler, a natural history expert for the Aguttes auction house.

Palaeontologists acknowledge that many fossils that go on the block are of limited scientific interest, but important specimens do go up for auction and can, as in Sue's case, be bought through acts of patronage.

The market remains small and "isn't for everybody", Mickeler said.

Only around five dinosaurs are put up for auction around the world every year.

The allosaurus which goes on sale Wednesday, among 87 lots of natural artefacts, is considered "small" at 3.8 metres (12.5 feet) long.

Carnivores like the allosaurus often fetch more than herbivores.

The price also goes up if the skeleton shows traces of a fight or an incurable illness, as well as if it is considered rare, has a high percentage of verified bones, or a particularly impressive skull.

"We recently sold a very beautiful piece to a Venetian family, they have a magnificent big room in which the dinosaur is perfectly at ease," Briano said.

But Ronan Allain, a palaeontologist at the Natural History Museum of Paris, denounced "completely nonsensical" prices.

"It's the luxury world, it's not for people like us," he said.

"We could decide to buy it pre-emptively, but for the theropod, for example, that would mean shelling out more than a million," he said.