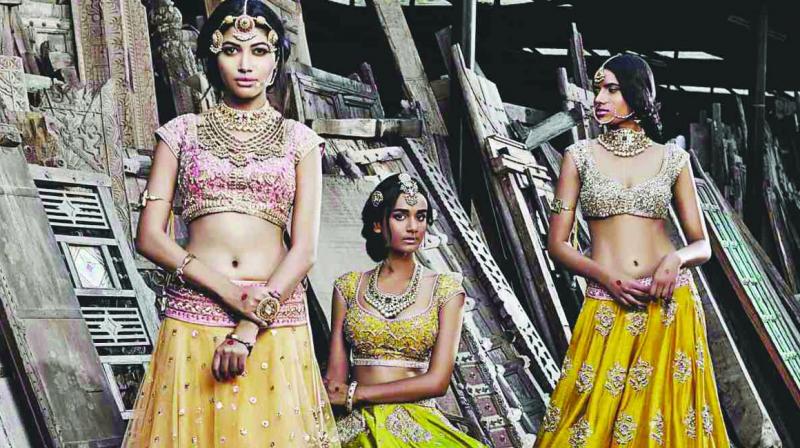 Jewels of Awadh by Tanya Rastogi (For reference purposes only)

Choosing a wedding outfit needs one to go a step ahead of getting stunning clothes as it is really a procedure, or rather a memory taking shape. The wedding clothing is one thing that a bride is concerned the most over everything else. The pattern of an Indian marriage has dependably been changing and advancing as far back as the idea of "big fat Indian weddings" came in.

Bridal Asia has curated its hand-picked Spring Summer'19 release, showing a portion of the prestigious fashioners of the nation. Through an amalgamation of extravagance and craftsmanship, it exhibited something for everybody, and a diverse grouping of clothing, gems, footwear and frill, from the choicest brands that met up for commending the Indian legacy.

Dhruv Gurwara, head marketing officer of Bridal Asia, says,, “This year, the exhibition completed 20 years and we are absolutely elated. Our narrative has opened the curtains of a new era, where the bride declares her individuality. The brand is now celebrating the chasm between its history, the coy bride and its future, the bold bride. With every passing season, we understand our muses better, so this was the perfect time to also dedicate space to lighter collections.” Amongst the innumerable stalls in the gala expo was Raniwala 1881. The co-founder, Abhiyant Raniwala, was born and raised in the beautiful and culturally rich city of Udaipur in Rajasthan, and has maintained the traditional couture in his eponymous brand, Raniwala 1881, is rooted to the values, aspirations, and heritage Raniwala upholds.  Some of the other renowned brands or designers present at the expo were Anushree Reddy, Anita Dongre, Abha Dlamia, Rohit Bal among others.

Total Dhamaal’s Mungda girl Sonakshi Sinha is looking gorgeous on the latest edition of Bridal Asia cover! Actress Sonakshi Sinha just dropped the new and stunning cover spread with the leading magazine on her social media handle. She captioned it, “It’s here! Yours truly on the cover of #BridalAsiamagazine Shot by @rohanshrestha! Get your hands on the collector’s copy at the summer edition of @bridalasiashow on 2nd and 3rd March at The Ashok Hotel Chanakyapuri, New Delhi. #BridalAsia2019 #bridalasia” Draped in a astonishing white attire with just the perfect ratio of make-up, Sonakshi looks stunning and gorgeous on the cover page. The tagline reads, “Dream Crazily Ever After”. On the work front, Sonakshi Sinha has her kitty filled with some of the biggest movies, starting with Kalank, Mission Mangal and Dabangg 3. Mission Mangal is an upcoming science fiction film directed by Jagan Shakti. It stars an ensemble cast headlined by Akshay Kumar, Vidya Balan, Taapsee Pannu and Nithya Menen, and tells the story of scientists at Indian Space Research Organisation who contributed to the Mars Orbiter Mission, which marked India's first interplanetary expedition. Dabangg 3 would be helmed by Prabhu Deva and its reunites Sonakshi Sinha with Salman Khan in the third instalment of hit Dabangg franchise. Kalak is directed by Abhishek Varman and produced by Karan Johar, Sajid Nadiadwala and Fox Star Studios. It stars Madhuri Dixit, Alia Bhatt, Varun Dhawan, Kunal Khemu, Aditya Roy Kapur and Sanjay Dutt in lead roles.