Cycling from Kochi to Tokyo

Three spirited youngsters are on a 10,000-km cycling expedition from Kochi to Tokyo to cheer the Indian participants in the 2020 Tokyo Olympics. 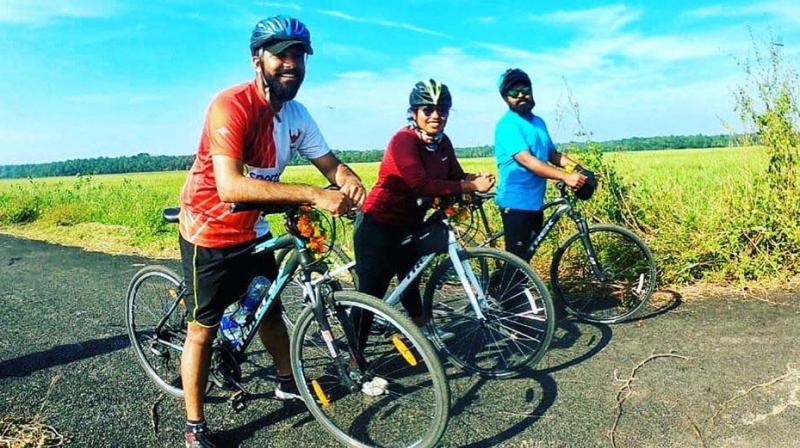 When was the last time you heard of someone cycling 10,000 km? Three spirited youngsters, Clifin Francis, Dona Jacob, and Haseeb Ahsan, have set out to do just that.

The trio, who studied in the same college in Kochi although in different batches, embarked on a mission to cycle all the way to Tokyo, the venue for the 2020 Olympics. Their cause is simple-to cheer Indian participants in the Olympics. The route map for Clifin, Dona and Haseeb, who started their journey in Kochi on December 15, 2019, looks like this: Kochi-Coimbatore-Mysore-Bengaluru-Chittoor-Vijayawada-Vizag-Srikakulam-Puri-Bhubhasehwar-Kolkata-Mizoram-Meghalaya-Bangladesh-Myanmar-Thailand-Laos-Vietnam-China-Japan.

“It’ll be an eight-month, eight-country, 10,000-km journey to reach Tokyo,” says 32-year-old Haseeb, who was in Vizag recently.

An IIM graduate, Haseeb quit his lucrative job in Amazon, Bengaluru, in July 2019 to do something more with his life.

“That’s when I thought going to Tokyo will be a great idea. When I bounced off the idea to Clifin and Dona, they both were as excited,” explains Haseeb. With a per-person budget of around `15 lakh for the trip, so far, the trio has completed around 50 days on their cycles. However, the challenge they’re mostly facing, as per Haseeb, is to find accommodation. “In cities, like-minded communities come forward and help us with accommodation; we also stay in Churches at nights, but when we get into the interiors of the country, it becomes increasingly difficult for our night stays,” reveals Haseeb, adding that sometimes they have even ended up sleeping in community halls. While 29-year-old Clifin and 30-year-old Dona have a fair bit of experience in long-distance cycling, Haseeb claims to be new to this.

“So I assume this will test my character. But for the moment, I am just enjoying,” he adds with a chuckle.

For Clifin, a former engineer who now works as a freelance Maths teacher in Kochi, trying different things and being a little adventurous has always been a part of his thought process.

“As an engineer, I have travelled a lot for various work assignments. During those journeys, I interacted with cyclists and was encaptivated by their tales of the landscape they’ve been through and the people they’d met,” says Clifin, revealing how he was drawn towards cycling.

In fact, just last year, Clifin had cycled all the way from Dubai to Moscow to watch the Football World Cup. “That’s when I met Haseeb who had flown in to watch the World Cup. We have been in touch since, planning something adventurous to beat the boredom,” Clifin reveals.

Dona Jacob, the third person in the expedition, is a software engineer in Mumbai, currently on a sabbatical. Dona got a taste for long-distance cycling when she rode across the Cuban villages when she was posted in Mexico for her IT assignment.

The taste of diversity

One of the most enjoyable aspects of the expedition for Cliffin has been the diversity of the country. “The food we’ve tasted so far has been great; we are getting a comprehensive insight into the topography and diverse cultures of the country while interacting with people in different villages. Haseeb chips in, saying that the roads so far have been good. “I think the real challenge will start when we cross the border; roads towards Myanmar, Thailand, Laos, Vietnam and China will tests our endurances as the territory is steep,” he says, adding, however, that once the team gets to Shanghai, they tell us they would cruise it to Tokyo.

On an average, the trio has been cycling for 5-6 hours and 80-100 km per day, changing their cycling speeds depending upon their deadline of July 24, when the Olympics begin. Along the way, the trio, who wanted to call themselves “Snails on Wheels”, has been meeting schoolchildren, government officials, IPS officers, NGOs, etc. “We’ve been trying to spread the message for people to be more independent, adventurous and free-spirited. Throughout the trip, we have also been urging the youth to focus on fitness. It has been especially heartening to see a great response from girls,” adds Dona.