Before animation came to him, John had a major interest in puppetry. 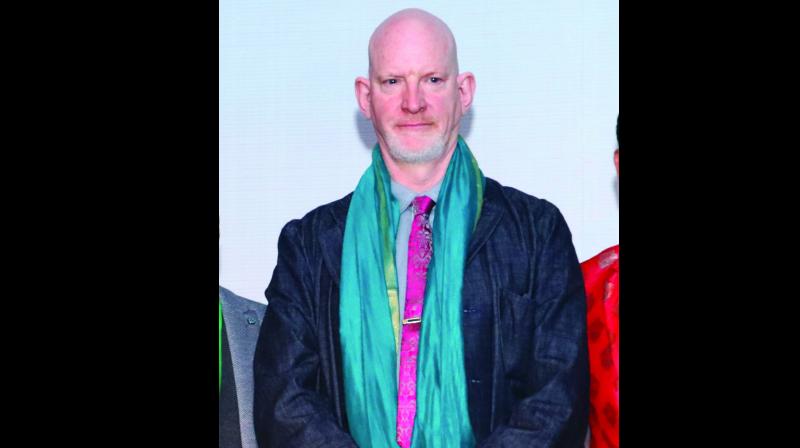 Animation filmmaker John Stevenson, of Kung Fu Panda fame, was in the capital recently for a film festival. Guess what? He was all things animation and he spoke to us about his love for puppetry, its relation to animation, and bringing out your inner child.

Sing with us: You better watch out, you better not cry, better not pout, I'm telling you why. Animation maestro John Stevenson was in town!

Present for the Smile International Film Festival for Children and Youth (SIFFCY) as a panellist, while many know of John’s prowess as an animator and the mastermind behind films such as Kung Fu Panda and Sherlock Gnomes, he began his journey as a puppeteer.

Growing up in a small English town, he would watch cartoons such as Tom and Jerry and often draw the characters. “I trained myself in animation by simply copying cartoons. I felt that it might be a fun thing to do even when I grow up, though my parents thought that I was crazy,” he reveals, and then adds, “At the same time, I loved puppets — whether they were puppet shows on television or otherwise. I loved collecting them and I even bought books to create my own.”

Puppetry and animation as closely linked, says John. He explains further, “They are about viewing something artificial with some kind of personality and life. Bugs Bunny is just a drawing until you animate it and bring some personality and character into it.” As for puppets, he simply says, “You put yourself in the puppet.”

With his journey progressing from the strings to the screen, Stevenson has amassed over 40 years of experience in the animation world. While he whispers, “I’m old!,” he still finds the idea of breathing life into, say, Po and Tigress from Kung Fu Panda, charming. The 61-year-old adds, “The magic of animation is that you know that it is not real life and yet those things can make you feel strong emotions. The fact that you can do that with something that is not real is incredibly powerful.”

And it is Stevenson’s inner child that resonates with this feeling the most. He continues, “The child version of me still lives inside this 61-year-old person. I can find that nine-year-old easily,” he affirms. He claims to have learned a lot more from his childhood than he has learned from adulthood. While making a project, he always asks himself, "would the child version of me want to see this, would he find it fun or exciting?”

And, yet, the magical world he creates comes with challenges. Stevenson adds, “In making a film that is aimed at children, you don’t want to be patronising. If you have a good message, you have to be careful that the way you make the film does not make it seem too didactic or boring because nobody likes being lectured.”

Kung Fu Panda is perhaps his best-known directorial credit. However, much like his other projects, the filmmaker has never revisited it. He elucidates, “I haven’t seen it in 10 years and I will never watch it.” Well, doesn’t he miss Po the adorable panda? He responds, “I gave KFP everything that I had to give. There was nothing more I could do in that film. I loved making the film with those people, the actors. I spent four and a half years; I worked very hard, as much as anybody else.”

Another big challenge that Stevenson has to face is to convince a studio to produce an animated film in the first place. Luckily, the director often has his way. “You have to know what hills you are prepared to die on. In other words, you have to know what is important to you about the film; if somebody wants to change that, you should be prepared to be fired rather than let that happen.”

While the truth is one bitter pill to swallow, one wonders whether films directed at children should focus on the ‘good, nice stuff’ or the truth. To that, Stevenson says, “The greatest respect you can pay children is the truth.”

Finding that child and keeping it alive in you is pivotal, he says, on a concluding note. “If you are making a film for family audiences or children, and if you can’t find the child you were, you wouldn’t be able to do it.”