Primitivism through the Indian eye

An art exhibition in the city aims to explore the nuances of tribal art in modern form by well-known local artists. 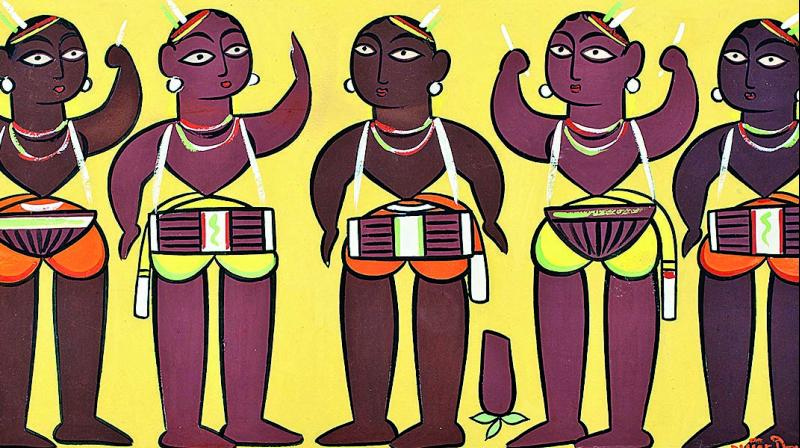 Taking inspiration from non-Western and prehistoric elements, the art of primitivism, which works to recreate a “primitive” experience, became an important step in developing modern art. Originating from the West, the art form first emerged in Paris in 1907 and by1920s it had become universal. African masks and figurines inspired western artists like Paul Gauguin, Picasso, and Derain, among others, and its influences were prominently seen in their work around that time.

Similarly in India, artists created a similar art form by drawing inspiration from local elements. One can now see it on display at The Primitivists exhibition in Mumbai, which brings together artists from different eras. Curated by Giles Tillotson, viewers can expect to see art from the likes of Rabindranath Tagore, Amrita Sher-Gil, Jamini Roy, F. N. Souza, M. F. Hussain, and others.

“The artworks are all paintings and sculptures produced in India in the 20th century that reflect the idea of primitivism. There are two essential elements to this theme: One is the wish to identify with supposedly ‘primitive’ elements of society such as tribal communities; the other is the simplification of formal means of expression. The latter makes works of art appear less ‘realistic’, more stylized or simplified,” Tillotson explains.

One of the important aspects that the curator paid close attention to was the art background of all these artists. Rabindranath Tagore, Sunayani Devi, and Madhvi Parekh were unaware of the rules as they had no formal art education, whereas Amrita Sher-Gil and George Keyt stuck to a more native form of practice despite being from art backgrounds. Jamini Roy, on the other hand, was an academically trained modernist. Other prominent artists like M. F. Husain, F. N. Souza, K. G. Subramanyan, Jogen Chowdhury and Rabin Mondal, despite their sophisticated training, created a unique language.

Expressing the reason behind choosing such a variety of artists, Tillotson reveals that he and the organisers wanted to give a sense of the breadth and variety of primitivism in Indian art. Though inspired by Western artists, the Indian understanding of the theme was unique because of its local muses. “In Western art, primitivism usually involves identification with or pursuit of alien societies. Indian artists sought inspiration in supposedly primitive elements within India itself. So there is a different kind of association with the primitive. We wanted to explore that difference,” Tillotson explains.

The curator adds that he was more interested in specific artists over specific paintings created with primitivism in mind, which can sometimes fit the theme even if it’s not the artist’s only style. “Our focus was on the artists than on particular works; we could have used other works in most cases. Some artists, like Husain, have a very diverse oeuvre, so in such cases, some works would not fit the theme so well,” he says.

Bringing together the diverse range, moods, and styles of primitivism in India, the exhibition showcases how artists ditched the original sophisticated style and were more inclined towards a folk style. The curator is trying to draw attention to Indian artists and how they mold everything in a unique way. “I want to convey the point that India’s engagement with modernism is always different, or unique in some way. Even when Indian artists seem to pick up on some theme in Western art like primitivism, their exploration and expression of it have a different nuance and meaning,” Tillotson concludes.

The exhibition will open on 14 November 2019 at DAG, Kala Ghoda.