Desertification has wiped out the Indian population of the Indian Cheetah, pink-headed duck and the Great Indian Bustard. 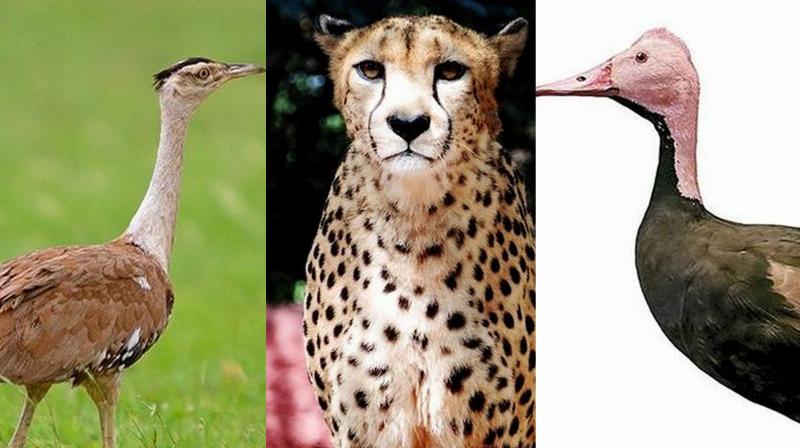 150 other species are expected to follow suit in the near future as they have been categorised as critically endangered. (Photo: Instagram)

Climate change has wreaked havoc on the planet and in turn, is affecting the fauna that lives in it. Human actions, plastic overuse, deforestation and subsequent desertification is degrading the earth faster than we expected.

Researchers from the United Nations Convention to Combat Desertification reported that three majestic animal species are now extinct in India. Improper agricultural practices and desertification has led to this great loss.

The Indian Cheetah, pink-headed duck and Great Indian Bustard could be found in various parts of India. But they have now been officially declared as extinct in the country. 150 other species are expected to follow suit in the near future as they have been categorised as critically endangered.

"We have a database of more than 5.6 million specimens, collected from all over India and also from the neighbouring countries before independence,” said Kailash Chandra, Director of the Zoological Survey of India. “They give a lot of information about how things have changed in more than 100 years. If you see their distribution in geo-special platforms, you'll realise how much changes have occurred because of the impact of deforestation and desertification.”

Chandra also pointed out that the use of pesticides while farming, the conversion of forest and to agricultural land, use of chemicals and the indiscriminate amount of deforestation happening in the name of development is responsible for the extinction. Mumbai’s Aarey Colony has faced indiscriminate felling of trees for the expansion of the metro and road lines.

While putting a halt on development is not the solution, it should be done in a more sustainable manner. Cutting down of trees shouldn’t threaten the habitats of animals, tribals and other microscopic beings.

"The entire food chain is affected due to this," said Chandra. He stated that a lot of land in India is continually being degraded and over 30 per cent of the country’s land resources are directly affected by cutting of mangroves, over cultivation and by soil erosion.

This problem of land exploitation is not restricted to India. A report by UN has revealed that over a million plant and animal species are now at risk due to various human activities including overfishing and pollution. Ecosystems like the coral reefs and mangroves, that generally protect its surroundings, are also at threat. Natural disasters like hurricanes are also on the rise due to this phenomenon.