An NGO is working on visarjan nights collecting the immersed idols and trash from the Juhu beach. 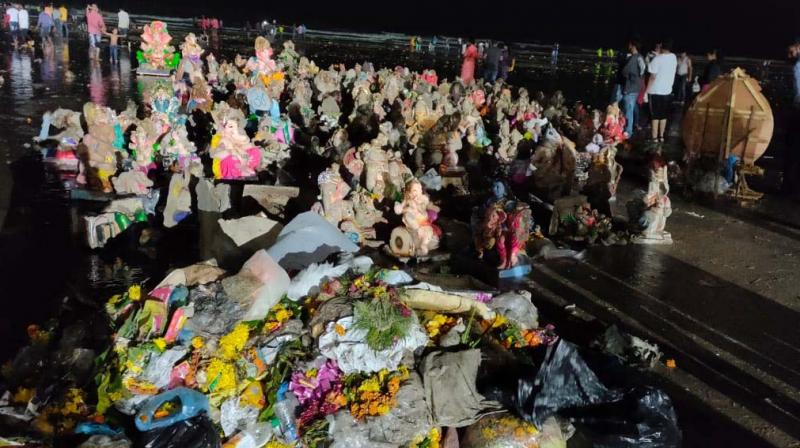 The idols and trash collected on Friday night at Juhu beach.

The Ganapati festivities in the city over the years have resulted in extreme water pollution, with around a population of 1.8 crore households bidding adieu to their idols at city beaches. Though many have realised the damage that plaster of paris idols and discarded puja paraphernalia does to the marine life, there is still room for improvement and awareness.

While various NGOs and volunteers take it upon themselves the arduous task of cleaning the beaches in the aftermath of visarjan, they usually come on the next day, when most of the pollutants are carried away by the sea. However, an NGO named Association Of Social Beyond Boundaries having identified this gap is taking precise action.

Now, Sagar Virendra Jain — the founder — and his team of volunteers venture out on visarjan nights for three hours, collecting an assortment of Ganeshas and other trash. They work from the Shivaji Statue to the Citizen Hotel stretch in Juhu.

“Visarjans take place after three, four, five, seven and 10 days of worshiping the idol at home. So we visit the beaches on these respective visarjan nights and the following early morning to dig up the discarded trash,” says Jain, who started with this initiative last year.

On their first day of clean up last Friday, with a team of 20 volunteers they collected 180 idols. The following morning, along with 250 volunteers, they gathered 20 idols and a much larger share of waste. However, the highest collection was on Sunday, that of 260 idols.

According to the beach crusader, cleaning in the night is the appropriate time since that is when people drop the trash. “Even the BMC is there during the night, which makes the job easy for them. We collect the idols among all sorts of trash, and assemble it at one place, from where it becomes easy for the BMC to collect. And since they are back on the ground at 6 am, it will make their work easy too,” shares the 25-year-old.

The thought, Jain explains, was to launch a two-way campaign to spread awareness and at the same time show people the destruction they are causing to marine life. “By doing it on the visarjan night, we can show people that whatever they are trying to push into the water is coming back, keeping in mind not to hurt any sentiment. Simultaneously, we talk and advise them about using eco-friendly idols from next year, that can be immersed in an artificial pond,” elaborates Jain, who is a banker by profession.

Most importantly, he explains that the NGO is there to support the BMC ground staff and calls them the real hero. “The BMC starts cleaning the beach at 6 am. Whereas, volunteers turn up by 7 when most of the work is already done by the authorities,” he says. The BMC dumps the collected trash from Juhu Beach at Juhu Koliwada, which is at the extreme end of the beach.

But what has surprised the beach warrior is the shift in the public attitude, with many often coming forward to help Jain and his team in collecting the trash. “This year they have understood the problem that the sea faces and has seen the plastic in the sea. People have walked up to us, complimented and asked us about the work, and even lent a generous hand,” he concludes.