Man of many layers

Satish Gujral, who received a Lifetime achievement award, speaks about art as a medium and changing india. 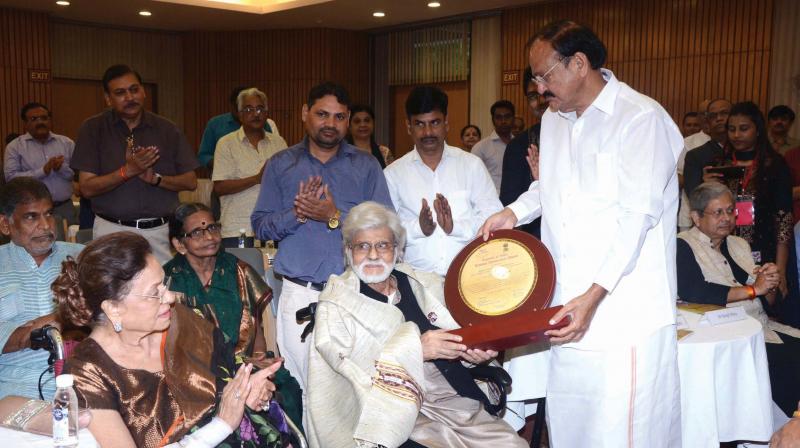 Painter, writer, muralist, sculptor, architect and graphic designer, Satish Gujral has proved to be one of the most versatile persons ever. The Padma Vibhushan awardee was recently bestowed upon with Legends of India - Lifetime Achievement Award by Vice-President of India, M. Venkaiah Naidu. His journey and accomplishments speak volumes about his mastery in these fields and hardly need much introduction. Talking about the award, the veteran artist said, “I felt flattered and honoured for receiving it.”

There had been many ups and downs but his journey has been fascinating. “I came to believe that whatever is visually interesting needs a creative formation,” says Gujral. When asked which was his favourite medium out of all, he replies saying, “There is no medium that I could call my favourite. Each one that I adopt at that time has its own fascination to me. But still I can say that my ‘Burntwood Phase’ that I began in the late seventies of the past century and continued with for almost two decades, exploiting its visual possibilities, was the best.”

The artist has seen India in transition. Talking about how different the country is from previous times, in terms of art and literature, he says, “We are living in India of which to my mind there has been no parallel. It is the present that is most interesting both in its creativity and its appreciation. I believe creativity is like a living organism. It germinates, evolves, grows to its full height, and ends. What it leaves behind are the peaks of its development that we call traditions or periods. There are many peaks of development of varying heights, in people’s cultural growth, as it is in the evolution of an individual artist. We consider these peaks as complete because every peak is complete when it has reached its zenith. Art, like peaks does not admit of improvement; what it admits of is its growth.”

His works have been affected by a lot of historical events, particularly the partition of India and Pakistan. “I had witnessed the partition since day one and the more I witnessed it, the more it challenged my creativity to give it an expression and I recorded it. Time helps artists evolve their style. No art movement or period of an individual artist, can be an improvement on a previous stage of creation even when it has grown out of it. If authentic, it has it's own ingredients, totally independent of its origin,” he adds.

His passion, he says, “Is to give form to any medium that for the given time was suited to the experience,” The artist has been inspired by Mexican artist Orozoco who was also his role model, “But only for a short time. It did not last long and each time, existence provided me a different role model,” he says.

But if there has ever been a constant muse for him, it has been creativity. “Creativity is the only muse I have consistently cultivated,” he signs off.