Photographs of the world of waste workers — their stories, problems, work life, feelings, struggles and hopes. 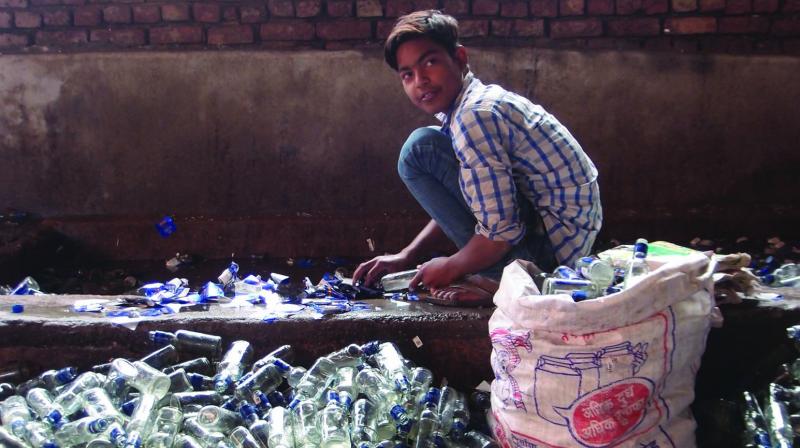 As part of Habitat Photosphere, India Habitat Centre’s yearlong photography festival on sustainable development curated by Dr Alka Pande, six French photographers are showcasing 42 photographs that delve into the role of waste workers across the world in a show titled ‘The City of Waste’ in the capital.

Rémi de Bercegol, one of the French photographers whose works are being showcased at the exhibition, said, “Contrary to the common representation of waste workers, shown in deleterious working and living conditions, this exhibition aims to portray the world of the city of waste in a different light, wherein waste workers are freed from the stigma attached to waste. The photographs in the exhibition document the conditions waste workers live and work in: open landfills, waste containers and public spaces from where they collect waste, as well as garbage dumps, warehouse, factories, markets and recycling workshops, where waste is reclassified and transformed into a profitable resource.”

“The photographs show the clothes that protect their bodies — rags, strips of cloth, or even plastic bags, and also the gloves and uniforms worn by those whose work is better recognised. The techniques and tools they use — baskets, hooks, chariots, carts, etc., the materials they extract and transform — plastic, cardboard, metal, glass, fabric, etc. also reveal the diversity of the practices and the ingenuity the recyclers bring to their work.” he adds.

Working on the project and his interacting with the people was an enriching experience for Rémi. “The people were generally surprised to see a white foreign guy who can talk basic Hindi with a researcher from Karnataka interested in their business and their life. Sometime, people can be suspicious, and it’s understandable, but most of the time, once they understood why we are interested in their life, they are quite welcoming and it’s easy to converse with them, drink tea, to talk about our respective lives.”

His experience with the kids of waste workers was especially close to his heart. “We had asked the children to draw their parents for a series titled ‘Draw your favourite super hero’. I’ve been particularly touched by how Anjali, 10 years old, described her father as a super hero because he goes everyday to the top of the mountain of waste to collect recyclable material that he then sells to make a living. Despite its innocence and naivete, the drawing is very precise: it represents the weighing machine on the right, the cycle on the left, the landfill in the background and the father holding a bag in the back.”

Working on the project also involved tackling several challenges. “The biggest challenge was to bargain with waste traders to be able to install the ‘tower of waste’ in the middle of the photographs that we had built. There were some unexpected delays in getting the money and I had to negotiate during days with traders to get the material for free, explaining them that it was for an exhibition. It was difficult to make them understand that the South Delhi middle class people would be interested in it. I finally paid for it. Some of the traders came to the exhibition and it was a real pleasure to have them with us, together with waste pickers for the opening.”

Waste workers are discriminated against not just in India but across the world, admits Rémi, adding, “The discrimination is actually similar all around the world and this is by no means a recent phenomenon. The biffins in Paris, cartoneros in Argentina, catadores in Brazil, pepenadores in Mexico, waste pickers in India, zabbâlîn in Egypt, bouâra in Morocco, and topla?c?lar in Turkey, all these men, women and sometimes children and the old, pushed to the fringes of the labour market and often living on the margins of society, are making a profit from city dwellers’ refuse. With the work they do to extract a variety of materials, these waste workers earn a generally modest living, and provide a real service to the city and its inhabitants, doing away with a part of their waste. Despite the indispensable role they play in the waste elimination and treatment process, the waste workers’ activity is rarely recognised and the latter are often excluded from the decisions and restructuring involved in the reform of public services that upsets their practices.”

This exhibition seeks to focus on women and men freed from the stigma attached to waste. They are seen as normal workers, busy doing their jobs, workers who want to be considered equal to others, recognised for their work and by society.