Co-work is the in thing in the capital From freelancers to small businesses to big startups, everyone is here. 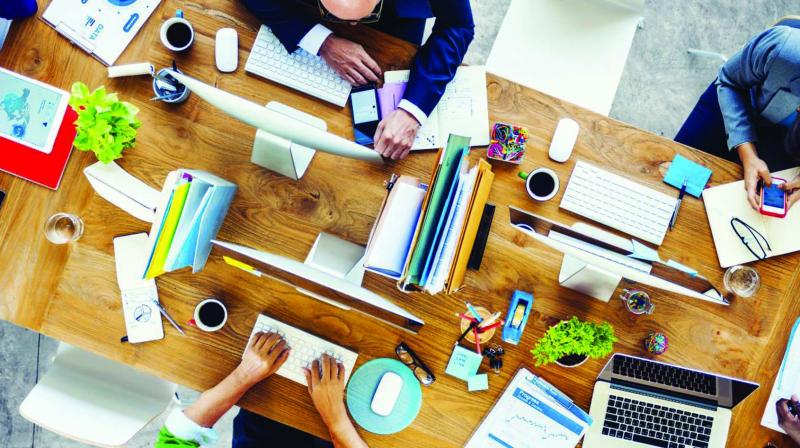 Apart from networking, mentorship is another activity many co-working spaces are offering through group events.

Life can get better when there’s no hard and fast rules about strict work hours, official dress codes and you could be your own boss freelancing or running a small startup.

Also you don’t really need to work from home or a garage to avoid high cost of renting which was impossible a few years ago.

Instead you can still own your office, have flexible work hours along with others from different walks of life, share ideas over a cup of coffee, hold meetings and events, or go gymming in spare time at a much affordable price.

Amid a centrally located busy bylane one spy upon an office space that is tastefully decorated, lively with all office infrastructure and backups with people working on their workstations, holding discussions or chatting.

Yes, this is serious business going on under the garb of an informal yet lively environment where many people are sharing work space simply because it makes good economic sense to do so.

From freelancers to small businesses to big startups – all preferring a co-working space that is interactive and affordable. Even companies like Godrej, Paytm, HCL, Glaxo are part of this game.

Even a large number of such shared working spaces have already mushroomed in Gurgaon and Delhi. Noida too is fast becoming the next stop for budding entrepreneurs to cash in on co-work culture.

With a close proximity to the capital, good metro connection and a young workforce, NCR is seeing a sprout of co-working spaces evolving. With a core team of 10-20 people renting an office space is never a feasible thought, says Girish Balachandran, managing partner at On Purpose Consulting, a startup creative communication consultancy. He feels co-working spaces take away the pain of having to set up your own infrastructure for printing, coffees, service staff, wifi etc so we can really focus on things we want to do for ourselves and our clients.

“The sense of a level playing field with everyone seated in a similar way without cubicles can be democratizing,” he says.

Also with many offices and individuals working under a single roof it helps in networking and meaningful conversations.

Apart from networking, mentorship is another activity many co-working spaces are offering through group events.

Huddle, which is a 60-workstation, modern industrial co-working space in DLF Cyber City claims to offer incubation services to users.

Ishaan Khosla, Co-Founder and Partner, Huddle is of the opinion that every player in the coworking industry is focussing on constant engagement with their coworkers, through events, educational seminars and designing spaces that give a stimulating environment.

“We realized the need of situating coworkers not only near but with their potential clientele and therefore created our first space in one of Cyber City’s most bustling buildings, with the largest corporate houses as our neighbors. Creating a differentiation is what enables a core base of coworkers,” he says.

Major gain of the business is the environment you build for business around you, says Sarthak Chhabra, director and co-Founder, AltF CoWorking. “With more corporates and SMEs getting inclined to the industry, it helps with more stable business in comparison to dependency on startups and freelancers,” he adds.

Earlier people used to look for unfurnished offices. This trend has shifted towards well-done up offices. “Further, the coming decade would again see a trend change from furnished offices to serviced offices, for which the major provider would be coworking spaces,” he says.

AltF CoWorking is India’s first private co-working space provider, which offers private office spaces with flexible policies and customised services with competitive and affordable pricing ranging from Rs 8,000 - 12,000 / seat depending on the location.

REALTY PRICES
In fact this trend has completely changed the demography of commercial realty. Many realters have jumped into the fray.

Himanshu Bindal, CEO & founder of One Co.Work says some of the builders have already started showing interest in this space by hiring best talent from the CRE industry pool and backing them up by building world class infrastructure. “For instance, Cowrks, coworking space is backed by RMZ Group,” he says.

Sudeep Singh, chief evangelist and CEO at GoWork, maintains builders prefer co-working spaces as a business model as it is currently the best way to use underutilised assets for them. “Going forward, players from the builder community will focus on establishing brands that allow their company to create successful venture within the fast growing sector,” he says.

Another new entrant, Smartworks has an interesting take. Neetish Sarda, founder of Smartworks says it’s interesting to understand how co-working has changed the way that commercial real estate is organised and to extrapolate what is next for the industry. The impact of co-working model is felt mostly by large enterprises/companies who are looking at bulk spaces for their office.

He further adds that the lock-in period and capital investment is negligible vis-à-vis a traditional set-up. Coworking companies are now competing with developers by offering large format spaces with differentiated service offerings, where co-working providers manage end-to-end facilities and services for all the member companies and create an experience that is larger than life. While this comes at a cost yet it is professionally managed and earn a healthy overall margin. Costs are lower as facilities like security, maintenance and provisions are shared, eliminating an additional ‘management fee.’

The pre-furnished condition of the space makes sure that there are no hidden additional expenses for initial costs and built-out.

While it may have gone unnoticed, flexible models of working like telecommuting, teleworking and hot-desking have been a part of the modern companies playbook for a while which is now being incorporated at a massive scale by coworking spaces.

In the current scenario, says Sudeep, co-working spaces cover around 3.1 million square feet and this number is slated to grow 4 fold to about 13 million by 2020. Furthermore, 64 per cent of India’s workforce is projected to be below 35 years of age by 2020. Therefore, the need for flexible workspaces with top-notch amenities will be at an all-time high. Offering cost-effectiveness, flexibility, hassle-free maintenance, networking opportunities and a fun place to work, co-working spaces are set to be the way future Indian professionals work, he adds.

GoWork claims to be world’s largest co-collaborative co-working space sprawled over 8 lakh square feet with a capacity of 12,000 seats across its two offices in Gurgaon.

Above all else, in a conventional space, location is the biggest factor that gets comprised, whereas, with the help of coworking spaces situated in the heart of the corporate hub, the pricing is a steal for a prime location. At Cyber City, Huddle is able to offer the flexibility, infrastructure and additional benefits as compared to conventional spaces at a fraction of cost, starting at Rs 6000 per month.

WHAT DATA SUGGESTS
GoWork is in for a rapid growth. A report by property consultants Knight Frank says large companies now constitute about half of the overall client roster for flexible co-working facilities as collaborative workspaces are gaining wider acceptance in India.

Globally, the demand for flexible workspaces is set to accelerate as over two-thirds of global companies plan to increase their use of flexible co-working and collaborative space over the next three years.

CHALLENGES
Major challenges which are faced includes the huge capital cost which needs to be made for starting each center and the amount of time it takes to build a coworking space from scratch. It hampers the growth of the company, which is bootstrapped and growing without raising any funds, Sarthak explains.

Himanshu feels due to economic downturn, clients may often face revenue problems and hence may not be able to sufficiently pay monthly rentals. It is seen that many startups shut down soon after their inception due to miscellaneous reasons and this also creates a problem with them staying with the coworking space. This whole process has a snowball effect on the co-working space too.

For Sudeep the major challenge is to establish client loyalty. With best in class amenities and services being offered by most of the leading players, ensuring user allegiance and stability becomes the utmost priority for co-working spaces. Top co-working spaces are thus introducing high-end facilities such as cafes, gyms, spas, food courts, gaming zones and productivity enhancing ‘breakout zones’ in order to attract more users to their spaces. Many are also organizing gigs by artists, seminars and networking sessions by business leaders etc. in a bid to attract more start-ups as well as established corporate houses to the co-working domain.

KEY TO SUCCESS
The key to success is the flexible workspace segment has been on an upsurge in the last few years. The upswing in the growth is being driven primarily by technology, enterprise and banking sectors, at large. Ideal workspaces are those where people feel free to move around, don’t feel tied to their desks, and create more opportunities for creative collaboration.