Naina Sen’s documentary film The Song Keepers is a remarkable tale of an aboriginal choir’s survival through the unexpected cost of migration. 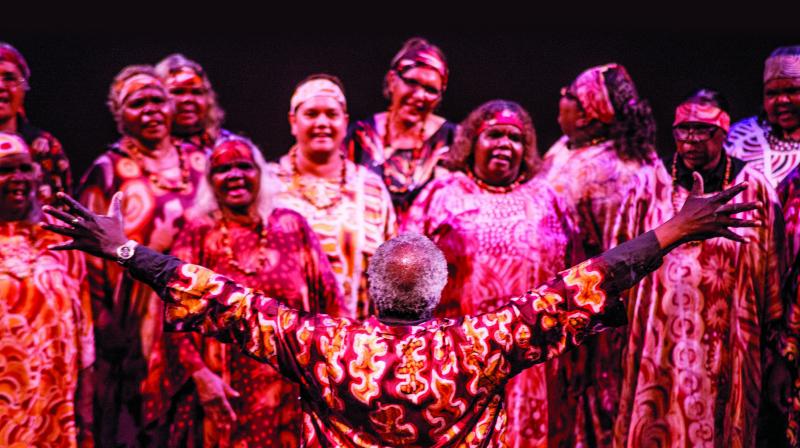 This documentary serves to highlight the community’s survival and their struggle for justifying their identity.

There’s certain genuineness in Naina Sen’s documentary film, The Song Keepers that gives you a worm’s eye view of the travails that befall an aboriginal women’s choir from Central Australia. “We get treated better here than we do at home,” mouths a young member of the women’s choir at the close of the film. It is this documentary-style authenticity that bring to fore the everyday realities of this community that makes it a poignant watch for both the viewer and the filmmaker. The film is an emotional telling of the stories of this choir as they embark on a journey to reclaim the hymns that were once given to their ancestors by the Germans missionaries but in their own traditional language. More importantly, this documentary serves to highlight the community’s survival and their struggle for justifying their identity everyday. “Essentially, the film is about 32 women who take you to the joyous journey of their tradition of music through the complex layers of the history that their musical choir represents,” says Naina. The film is also about a personal storytelling of the complexity of their identity.

The film introduces the world to the remote churches of Central Australia, where this obscure 140-year musical legacy of ancient aboriginal languages, German sacred poetry and baroque music is being preserved by four generations of song women. “The choir represents the duality that exists between the traditional culture and the modern notion of the faith,” explains the filmmaker. She continues, “These women are the custodians keeping these centuries old songs and poetry alive with grace that doesn’t exist anywhere in the world. They are the hope, courage and the power of the human spirit and voice,” she declares.

The 84 minutes documentary was first premiered at the Melbourne International film Festival in 2017, followed by a 12 –week national theatrical release across Australia last year, making it one of the most successful Australian documentaries at the box office in recent years. No doubt that the film has been well received, the director had invested over four years in bringing the resources together for this film. For Naina, this film was also a collaborative effort in fostering a strong bond between her and these women. She says, “It takes time to build relationships and trust from both the ends. Identity of personal story telling is at the core of my story telling practice, so for me it was really important that we make this film as a collaboration,” insists the director.

While the idea of showcasing the life of these aborigines seemed interesting and attractive, it wasn’t easy for Naina to bring alive the hidden aspects of their everyday struggle on screen. “We had to work very closely to figure out how to tell the story because it is very complex and layered. It is a micro presentation of my relationship with these women, so it is important that they participate equally because they are the driving force of the story,” she recalls.

This film has been nominated and awarded in multiple categories, but it is certainly not Naina’s first brush with the aboriginal community, however she informs that her exposure to these traditional songs happened only at a much later point. “I never heard these songs since I have shifted to Australia, but when I heard them for the first time I was completely blown away and wanted the rest of the world know about it,” she says.

The survival of the choir depends on the younger generations now and there is a pressing need for the younger generation to join them and take over the legacy. She says, “One of their biggest challenge is the fact that they need more young people, which is now happening gradually because they have now seen the power and pride that the community has.”

The Song Keepers is scheduled to screen for the first time in India today to showcase the lives of these extraordinary women who deal with their struggle for identity with strength and grace. “I wanted to share my work with my people and my cultural landscape. I also believe that this screening is the first step towards bringing these women to perform in India that they have been wishing for long,” she concludes.

The film will be screened today at 6.45 pm, at the G5A Foundation for Contemporary Culture