Crawling back to normalcy

After the December fire in Kamala Mills Compound, life seems to be getting back on track slowly, but surely. 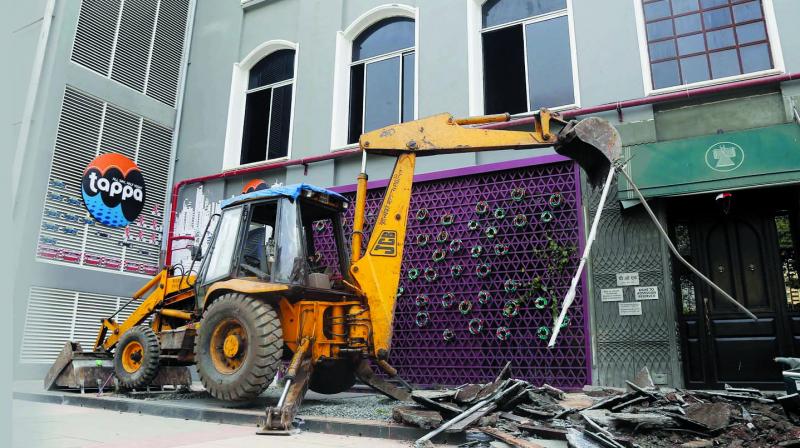 While footfall is at an all-time low, restaurant owners are still hopeful.

The end of 2017 saw one of the most devastating fires that the city has had in a few years. The Kamala Mills tragedy — which took the lives of 14 people, and had a high injury count, has left the area scarred.

And not just through the fire alone. Several demolitions took place in the compound right after the fire to curb illegal encroachment of land. Needless to say, the footfall here too, has reduced to a trickle.

Mumbaikars, who are known for their trademark resilience in the face of crisis, are making their way back to work, and restaurants are beginning to open doors. However, the recent tragedy still hangs heavy in the air, creating challenges for the restaurateurs who have their property here. Grandmama’s Café had its storefront demolished in one fell swoop. Owner Abhayraj Kohli says, “Business has gone down by almost 50-60 per cent. We also lost a major chunk of our business during New Years’ too. The footfall has also had an impact on the employees as it directly affects the staff's service charge and work.”

While footfall is at an all-time low, restaurant owners are still hopeful. “For the next one month, we are expecting 25 per cent of footfall of our usual business. We can’t expect much for a while. But it seems to be picking up slowly,” says a Sanjay Shetty, co-owner, London Taxi, which was damaged during the fire.

One way in which the restaurants have tried to pick up the pace once more has been through social media campaigning. “We are continuously making efforts to put out clear communication to our guests via social media and are keeping them informed about our restaurant updates and safety measures,” says Abhayraj, adding, “We also planning a combined activity along with all other affected restaurants in the compound, to gain back the trust of our customers and diners.”

The only positive to have come out of the entire situation, perhaps, is the fact that restaurant owners are becoming much stricter about fire safety. Sanjay elaborates on the safety measures taken at his restaurant, saying, “We’re getting help from Israeli fire experts to know what to do in case there is a fire again. For instance, we discovered a small ball, which you can throw on the fire, which can kill it. We are going an extra mile to educate ourselves. Even if our employees quit they will be certified fire-fighters.”

Grandmama’s too, is focusing on creating signage posts to ensure that the fire exit is clearly marked — which was an issue at both Mojo’s and 1 Above, when the fire broke out here.

However, there’s still a long way to go, however, as people are gun-shy when it comes to the compound. PR professional Khushboo Shah says that several office-goers have started to stay away from Kamala Mills since the fire. “Big companies are shying away from the area. Lower Parel houses big companies, which regularly host bashes for their employees. At least a handful of these companies have specifically started moving their parties away from Kamala Mills, and are looking for safer places to throw parties,” she laments.