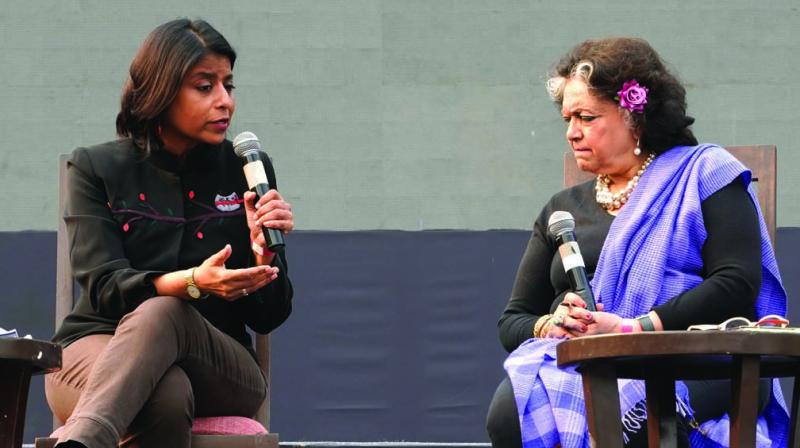 Dr. Alka Pande in a conversation with Anuradha Sengupta.

In small, yet significant steps, India is beginning to recognize the LGBTQ+ community. Whether is it the abolishment of section 377 or the assimilation of LGBTQ+ literature into the mainstream, society is making space for the community. It is to stitch together diverse narratives that the Rainbow Litfest brought together different voices from the community in India's first queer and inclusive literature festival.

Organizer and curator Sharif Rangnekar tells us that the idea for the fest was born out of a dearth of international fests that focused on the queer community. "I was in the midst of depression and needed to re-focus my life and I realize now that there was no better way than serving my community - something that always motivates me."

The queer narrative is shaped by the history of the community, the political nature of it and its assimilation into literature. Several panels explored these very themes, with voices across the board to pour insight into them. While talking about relationships in the queer world, Arpit Bhalla, a gender and sexuality rights activist, says, "The common misconception is that we, as gay men, are on dating apps only for sex. The truth is, often we seek a real connection, like everyone else." When it comes to relationships, monogamy poses a crucial question. While some recognize the culture of polyamory, model and transwoman Rudrani Chettri points out that the absence of marriage introduces instability in her relationship. "Without getting married, we do not have a support system. Our families do not help us stay together, and there is no one to turn to."

The question of representation seeks answers in every minority. But as the moderator Vivek Mansukhani asks, should only a queer person tell a queer story? "The first right of representation goes to people who identify as queer. However, I do believe that these narratives shouldn't come from them alone," believes Saikat Majumdar, an author and professor. The boundaries of representation must be stretched to get the queer narrative as far and wide as possible, opines Gazal Dhaliwal. Screenwriter for films such as Ek Ladki ko Dekha Toh Aisa Laga, the artist says, "For me, the priority is the story. More and more queer stories need to be told with the understanding and sensitivity of queer experiences. And if a non-queer person is able to do that, then I see no reason why they should not be able to do it."

The journey of a transgender person in this community stands out as an important dialogue, in the recent context of the trans bill that has been passed. Rudrani Chettri, Zainab Patel (director of KPMG) and Mohul Sharma (from 'The Lalit') open up about their own struggles, in a society that still has a long way to go in accepting them. While recognizing their privilege, the panelists point out that for every transgender model, director or acitivist, there are thousands who suffer and remain unrecognized.

With an amalgamation of prose, poetry, art, music and dance coming together, the fest certainly marked a celebration of this community. "We hold the mic, we invite others, we bring things together, sharing a space with a clear sense of equity and equality. If we are all human and humane, there is common ground and we should remind each other of that.", Sharif says, summing up.