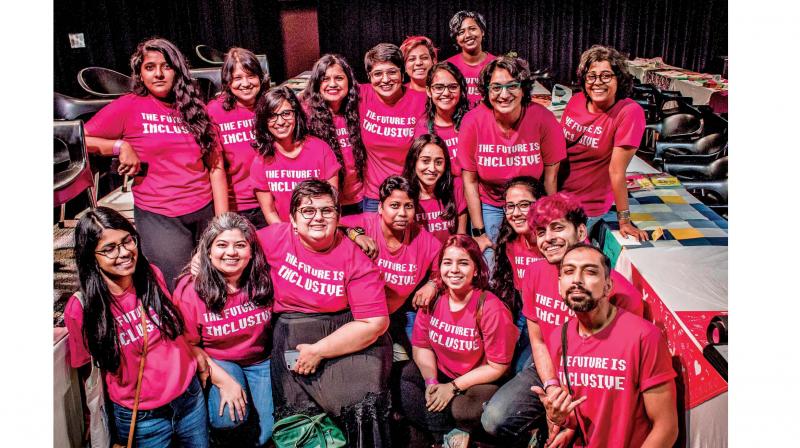 When in a difficult space, we instinctively reach out for narratives that reflect our struggle because shared experiences infuse us with strength, courage and a hope to soldier on. Gaysi, a Mumbai-based forum has functioned as a platform for the desi queer community to share stories and experiences for the past ten years, and today, Gaysi is all set to mark it’s 10-year anniversary with Pinky Promise, an evening of six short story acts written especially for the occasion, and a fun after party which will celebrate love, equality and toast the Supreme Court’s landmark verdict decriminalizing homosexuality.

Talking about how this 10-year-old platform came about, Sakshi Juneja, who co-founded Gaysi along with Priya Gangwani, says, “When I came out in early 2008, I had this urge of wanting to connect with more queer people. And to fulfill this urge, I went online looking for shared experiences. I found a lot of lesbian narratives on love, family, friends, the workplace, but there was no Indian context to it.” Eager to explore stories that she could relate to, Sakshi reached out to fellow lesbians, inviting them to share their stories on the blog she had started, stories that documented how their sexuality was affecting their lives and how they navigated being a lesbian in India.

What started out as a ‘family blog’, has now flourished into a cherished platform that gives visibility and a voice to millions belonging to the LGBTQI community.  “Over the years, it organically evolved to include the narratives of so many identities, with even family members of queer folks sharing stories. Today, it's a platform where countless people share and take away stories they are in need of hearing,” she says.

Along with the online space, Gaysi has taken conversations around gender and sexuality to the offline space too through film screenings, book readings, their open mic event called Dirty Talk and their self-published queer magazine, The Gaysi Zine. Pinky Promise is another such initiative as the six short story acts will explore and celebrate queer love, longing, desire, devotion and more. The stories have been written by six writers, will be performed by six actors and have been directed by Sheena Khalid, a founding member of Patchworks Ensemble - the theatre company that gave us the memorable The Gentlemen’s Club AKA Tape - the first play to gave audiences a peek into the world of drag kings.

Sakshi gives a taste of the kind of stories in store by saying, “Lihaaf Ke Peeche has friends discussing the question ‘what after 377?’ while Travelling While Trans explores how difficult coming out can be when grappling with one’s own fears. So Far is about the power of forgotten memories and Paying Guest hilariously explores identities and needs through a sci-fi lens. The alternations between love and its denial, memory and forgetfulness, loss and finding have been the most essential features of queer life in the last 10 years,” she explains.

Though happy with the work done in the past 10 years, Sakshi says that running a platform like Gaysi still throws up challenges. “We like to dabble in creative initiatives and gathering funds for all of that continues to be challenging. But what’s fulfilling is being able to make an impact, get more voices on board and work with budding talent,” she avers. Right after their decennial celebrations, Gaysi has another ambitious project lined up, for it is set to organise a two-day Zine Bazaar in Delhi next month, much like the recently concluded one in Mumbai. The bazaar will feature queer zines, activities, panel discussions and lots more.