Ockhi’s litter a cry for help from oceans: Afroz

The beach clean up hero says that the mindset around marine litter must change to prevent an Ockhi-like incident from occuring again. 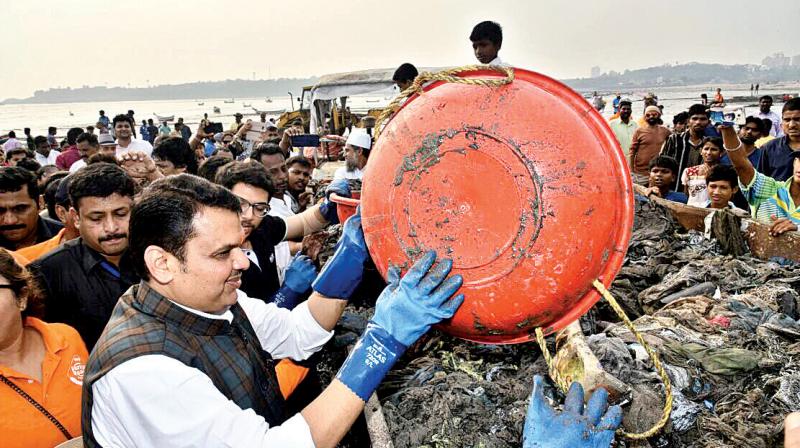 CM Devendra Fadnavis cleaning up a beach on December 3.

This week saw Mumbai witnessing moderate rainfall and chilly winds, thanks to the cyclone Ockhi. Passing through the city, it showered Mumbai with moments of relief, and a very warm winter month. Not just that, a precautionary holiday too was declared on Tuesday across schools and colleges in the state, giving more reason to cheer for, along with a pleasant weather.

However, it wasn’t all fun and games with the mild cyclone, especially since in the aftermath of Ockhi, the coastline was dumped with a huge amount of litter and waste. Besides the Versova beach, trash has washed ashore on Juhu beach, Dadar Chowpatty, Nariman Point, Marine Drive, Madh Island and even Marve.

According to reports, the Brihanmumbai Municipal Corporation’s (BMC) waste management department has estimated over 80,000 tonnes of waste from the ocean being washed ashore in Mumbai.

City-based lawyer and eco warrior Afroz Shah sees it as an opportunity to pluck waste from the ocean. He has been tirelessly working on cleaning the Versova beach, which had a 1 km patch full of litter, thanks to Ockhi.

“Because of climate change, unsual cyclones and typhoons are heading our way. And since our oceans are full of plastic at this point, tonnes of it from the stomach of the ocean are churned out to the shore, thanks to the cyclone,” he explains. As the beach-lover puts it, “It’s the nature, the ocean, telling us ‘clean me’.” He insists that immediate action needs to be taken, because if left by itself, the trash may sink into deep sea and never come back again.

Explaining how this plastic affects marine life, Afroz says that in deep sea, it breaks into small particles called nurdles, which when swallowed by fish, causes them a painful death. “So, if you see people eating fish, they also have plastic on their menu because of it,” he shakes his head.

The lawyer is currently working towards getting policies for marine litter in place, and emphasises that it’s not just a problem around the beach. This form of litter is different from land garbage.

For Afroze, gathering citizens and sensitising them is an important part of trying to fix this problem. “We’re running a campaign along the creek of Four Bungalow, where around 4,000 slum dwellers live, dumping plastic on the beach. Every Saturday, for three hours, we teach them how to handle plastic at home and not dumping them on the creek.”

He also believes in the action of regular cleaning, and making homes a zero garbage zone. Lastly, he adds, it’s provoking everyone around to follow these steps.

“When I say provoke, I want to work with children. It gets difficult to get across to the older generation, and anyway we’ll pass the baton on to the kids in the long run,” he smiles.

Afroz claims that it’s the mentality that needs to be changed in the long run. “BMC is cleaning the beaches, but the tenders can’t solve the problem of marine litter. And what happens when we have another Ockhi?” he questions.