Robot that can 'spy' on fish developed

The robot's swimming mechanism - initially designed with the help of biologists - gradually improved as the robot spent time with the fish. 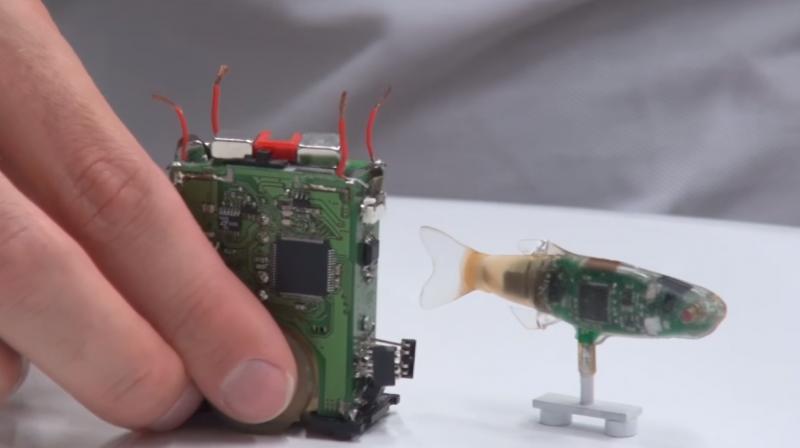 The researchers developed a closed-loop system in which the robot influences the fish's behaviour, but also adapt its own behaviour to them. (Photo: Video Screengrab/ Ecole Polytechnique Federale de Lausanne)

Scientists have developed a new miniature robot that can swim with fish, learn how they communicate with each other and make them change direction or come together.

Researchers at Ecole Polytechnique Federale de Lausanne (EPFL) in Switzerland developed the robot that can integrate perfectly into schools of zebrafish.

"We created a kind of 'secret agent' that can infiltrate these schools of small fish," said Frank Bonnet, a researcher at EPFL's Robotic Systems Laboratory (LSRO) and author of the study published in the journal Bioinspiration & Biomimetics.

The robot is seven centimetres long - longer than the fish it is modelled after but with the same shape and proportions.

It is equipped with magnets that link it to a tiny engine installed under the aquarium to propel it through the water.

The researchers chose zebrafish for their study because it is a robust species whose schools tend to switch direction and move about very quickly.

The team determined the key criteria that would allow the robot to integrate into schools of zebrafish and subsequently influence their behaviour.

Their behavioural characteristics were also taken into account, such as linear velocity, acceleration speed, the distance between individual fish, the size of the schools, their vibrations and motion, and the rhythm at which they move their tails.

The researchers also wanted to develop a closed-loop system in which the robot is able to not only influence the fish's behaviour, but also adapt its own behaviour by learning how to communicate and move like they do.

The robot's swimming mechanism - initially designed with the help of biologists - gradually improved as the robot spent more time with the fish.