The spectra obtained at Keck Observatory showed that this supernova looked like nothing ever seen before. 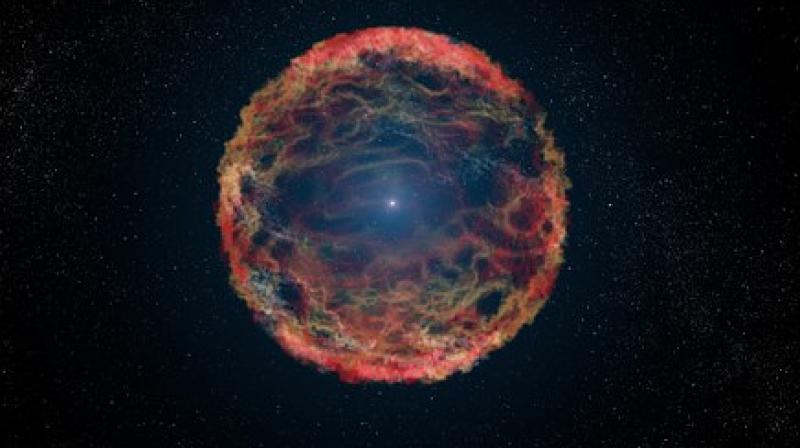 Scientists have made a bizarre discovery - a star that refuses to stop shining, despite exploding multiple times over a period of more than 50 years.

Supernovae, the explosions of stars, have been observed in the thousands and in all cases they marked the death of a star.

"The spectra we obtained at Keck Observatory showed that this supernova looked like nothing we had ever seen before. This, after discovering nearly 5,000 supernovae in the last two decades," said Peter Nugent, Senior Scientist at Lawrence Berkeley National Laboratory in the US.

"While the spectra bear a resemblance to normal hydrogen-rich core-collapse supernova explosions, they grew brighter and dimmer at least five times more slowly, stretching an event which normally lasts 100 days to over two years," said Nugent.

The supernova, named iPTF14hls, was discovered in September 2014. At the time, it looked like an ordinary supernova.

Several months later, astronomers at Las Cumbres Observatory (LCO) in the US noticed the supernova was growing brighter again after it had faded.

When astronomers went back and looked at archival data, they were astonished to find evidence of an explosion in 1954 at the same location. This star somehow survived that explosion and exploded again in 2014.

"This supernova breaks everything we thought we knew about how they work. It is the biggest puzzle I have encountered in almost a decade of studying stellar explosions," said Iair Arcavi, a NASA Einstein postdoctoral fellow at LCO.

The study, published in the journal Nature, calculated that the star that exploded was at least 50 times more massive than the Sun and probably much larger.

Supernova iPTF14hls may have been the most massive stellar explosion ever seen, researchers said.

The size of this explosion could be the reason that our conventional understanding of the death of stars failed to explain this event, they said.