The farm has no intention of selling the mega-mollusc. 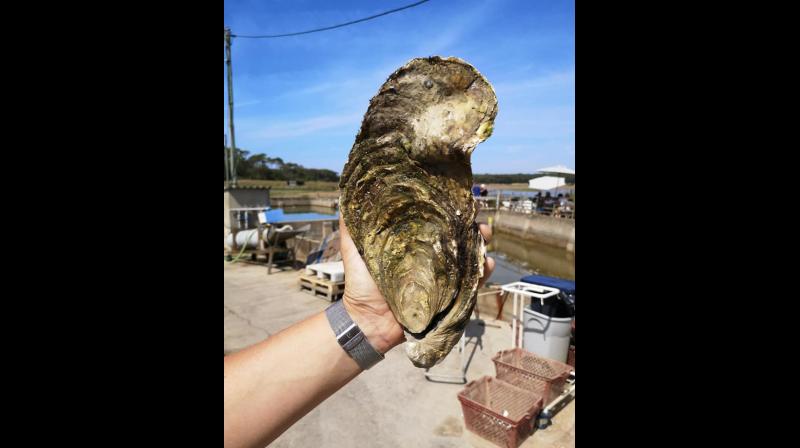 The salinity level of the water body determines the size of the oysters. (Photo: Facebook [Viviers de la Guittiere page])

For a food festival that takes place in western France every year, oyster farmers put together a seafood feast of the freshest produce from the sea.

"I was working in the channel and walking along I felt something with my foot," said Mathieu Naslin, an employee of the Viviers de la Guittiere oyster farm. "I picked it up and it was a huge oyster," he told AFP.

Another massive oyster was found at a farm close by, in the Sables d'Olonne area. It weighed 1.4 kgs and was found in April. "It's extremely rare," said Naslin. He said that in his eight years on the job, he had seen nothing like it, reported NDTV.

There are no doubt such bigger or even bigger oysters out there. The salinity level of the water body determines the size of the oysters. The salinity occasionally drops as a nearby lake usually dumps water into the channel. That throws off the levels of salt thus restricting the growth of the oysters.

The oyster, which was nicknamed ‘Georgette’ in honour of a retiring worker, has since been returned to the Atlantic. The team estimated that the oyster was 13-15 years old as a commercial oyster grows about three centimetres a year.

"Nonetheless it has been shown from the growth of the shells that an oyster can live for between 35 and 65 years," he said. Although the mega oyster is edible, the farm has no intention of selling it. "There are people who go for very big oysters, but we want to keep it alive and why not keep it growing. It's like a trophy," Naslin said.