Recently, Kathak guru Shila Mehta mesmerised the audience in Belgium with two of her unique performances at the Minard Theatre in Ghent. 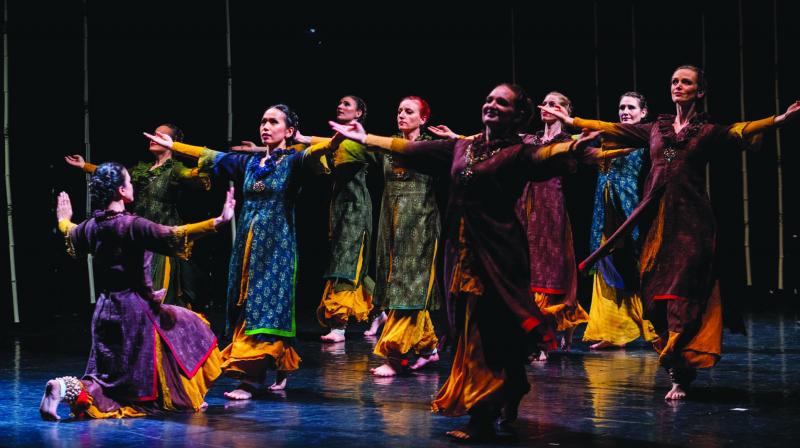 Shila Mehta is an artiste who is keeping the Indian cultural flag flying high by using Kathak and mixing it with modern forms. — Rudy Carlier

Belgium is a wonderful country that always opens to various cultural programs — it always welcomes artistes from the world over to showcase their talent and creativity. Recently, Kathak Guru Shila Mehta mesmerised the audience in Belgium with two of her unique one-of-a-kind performances at the Minard Theatre in Ghent.

One was a solo presentation titled Nimitta — a Shila Mehta version of the Amba-Shikhandi story from the great Indian epic, the Mahabharata, and the other was a thought-provoking Kathak contemporary dance mix Women Speak, which left people totally in awe of Shila Mehta and her exceptional choreography style.

Shilaji paid tribute to her Guru, Pandit Vijai Shankar, and brought Kathak in its purest form in her solo piece, Nimitta, a powerful interpretation of Amba-Shikhandi, she managed to convey an energy and meaning that didn’t need words to be understood.

The opening of Nimitta instantly establishes an atmosphere of tension. The image of a battlefield unfolds through the words of the Hindi narrator and, for those who don’t master the language, his dynamic voice. A small light opens in the centre-backstage, making the contours of the dancer and her twirling arm movements visible. We are on the battlefield, and Kathak Guru Shila Mehta, known as a graceful and elegant female dancer, has turned into a warrior with a confident smile — broad-legged with powerful footwork. Her sharp movements, invigorated by the roll of the percussion, alert the audience’s senses. The narrative of the story is about to unfold.

A clear introduction in Dutch by Babette Weyns, historian at Ghent University and aspiring Kathak dancer, helped all in understanding the different passages of the performance. Shikhandi, a male warrior, stands in front of the man he was born to defeat, and is suddenly taunted by memories of his previous life as princess Amba — the princess who was betrayed by the very man he is about to kill. 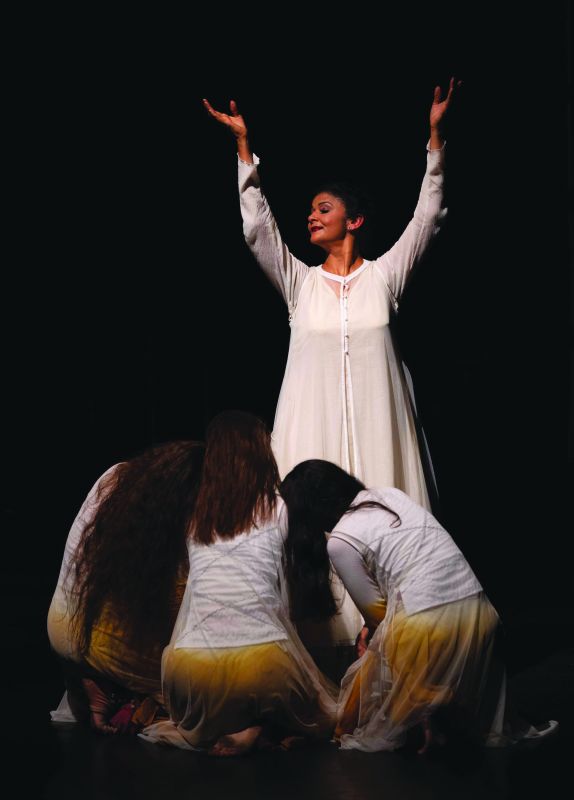 Shikhandi remembers, and Shila Mehta’s movements, dancing an outward battle on the field, gradually evolve into an inner battle between the dancer’s masculine and feminine side. Mehta chose the story of Amba-Shikhandi because of its contemporary value, addressing the issue of gender fluidity. Dancing these two characters shows her as a master storyteller, for she makes the audience forget that it is a woman dancing a man’s role. She covers the entire stage, catching the momentum with her vigorous movements. Until she reveals the female character by skilfully alternating the loud motion of her right body work with the gentle hip curves and subtle hand gestures on her left. The latter movements take over and the performance takes us to princess Amba’s palace.

With a more traditional repertoire of movements, we are reminded of the dance style’s history being practised in the courtyard of many palaces. Here, the dancers passed on messages of societal value through the stories they danced. This is the great strength of Shila Mehta’s dance. She makes the story come to life in such a way that you can vividly imagine all the characters on stage. She makes the spectator forget that he or she is watching a dancer portraying a story. Mehta becomes the story.

Her amazing abhinaya (expressions) evokes a subtle continuum of emotions, ranging from the valour of the battling Shikhandi, to his disbelief when his opponent refuses to battle, from Amba’s romance to her anger, betrayed by everyone, and finally, the inner fight of Amba-Shikhandi. The gifted artist manages to play with the idea of gender fluidity without becoming too dramatic. The underlying issue of the main narrative is well understood by the audience. We are left with a deep impression of this timeless tale. 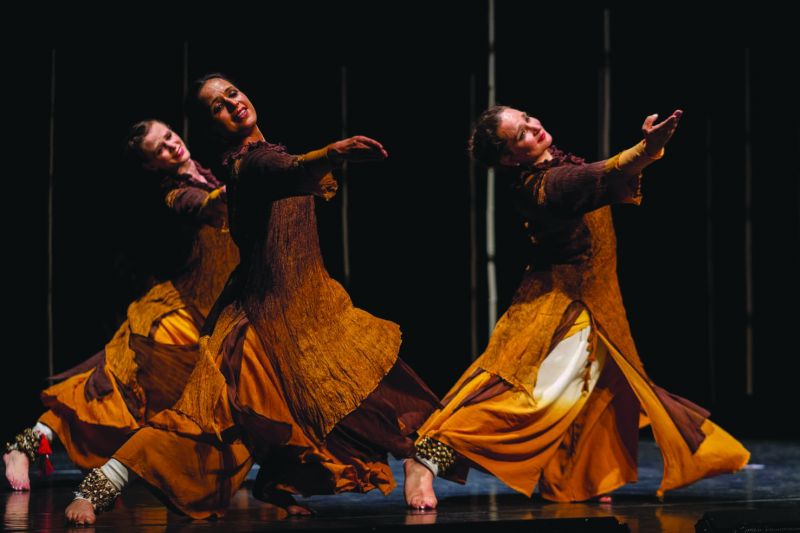 Nimitta illustrates the research that goes into creating a well-layered dance piece. The piece was choreographed by Dr Kanak Rele, Mohiniattam exponent, and adapted to Kathak by Shila Mehta. She conceptualised the music and costume especially for the piece. For the music, composed by Somnath Mishra and guided by Dr Kanak Rele, she inspired herself on the Charani ballads, a tradition of musical storytelling still existing in western Indian states like Rajasthan and Gujarat. By cross-composing elements from these deep-rooted traditions, Shila Mehta innovates the Kathak repertoire, thus creating a traditional blend in a contemporary fashion. The music score is a great asset of the performance, alternating between melodic and rhythmic moments, making the audience tap along or close their eyes in enjoyment from time to time. Her red and blue costume, cleverly designed by Sandhya Raman, could be a men’s as well as a woman’s costume, and at the same time, still suits the movements of her dance.

The performance started with a small ceremony that Shila Mehta held in honour of her recently deceased Guru Pandit Vijay Shankar. It set a special tone for the evening. We got a glimpse of Mehta’s very personal connection with her teacher, surrounded by all of her disciples in Belgium. One could sense the deep respect with which the Belgian team joined their Guru on stage, and this sensation spread through the audience when the dancers returned to their seats.

The other performance of Women Speak, a production inspired by and based on Guru Shila Mehta’s previous production Mahasati. Amongst the audience was Alain Platel, the celebrated choreographer of Les Ballets C de la B. On seeing the show, Alain commented, “I was carried away by the performance and touched by the simple and pure beauty of certain scenes, which is a rare quality nowadays.”

Women Speak draws on and brings to life the emotive theme of female strength or power. It signifies a collaboration between Shila Mehta and Maya Sapera, born through the success of Mehta’s production of 2016, which is based on and titled as Mahasati — a woman from Indian literature whose life portrays a complex mix of hardships and struggles. The artistic team of Women Speak brings this legend to the present as a hopeful tale that will resonate with people globally.

Alain Platel went on to say “Mehta is a fantastic appearance on stage and the group is impressive and it is unbelievable that so many Flemish women incorporate Kathak, which is a difficult dance, so well” Growing talent in Kathak to this level has only been possible due to the long-term collaboration between Shila Mehta and Maya Sapera and their respective institutes “Nupur Zankar, Academy of Performing Arts and Research Centre” and the “Maya Sapera Dance Company”. Together they provide Belgium with a recognised Kathak educational program and regular performances to contribute to the cultural scene in the region.

For this production, Shila Mehta and Maya Sapera collaborated with the Belgian choreographers Lisi Estaras and Koen Augustijnen of Les Ballets C de la B. Every aspect of the production oozes exceptional quality, including costume design by Sandhya Raman who is well known in the South Asian arts field as a designer of choice. For Women Speak the unique concept of multi-layered costumes was used as a symbol of the layers of ignorance with which our personality gets covered. As the dancers uncover their layers, the colours become brighter and so reflect the evolution of the soul.

The light design was undertaken by Carlo Bourguignon and continued the theme of embodying the evolution of personality through lighting for extra impact. He has created lights for internationally renowned choreographers and has a passion for India. The music was a combination of recorded and live. The recorded element was created by Shila Mehta and Somnath Mishra specially for the original production Mahasati. Mahabub and Sattar Khan, brothers and international artists, resident in Ghent, inject Women Speak with live sounds. The complexity of the recorded music and the integrity of the live music were well received by the audience.

Anneke Van Laere created the decor for Women Speak out of ceramics and bamboo. The stage was magically filled with birches, those white and black trees. That created a marvellous atmosphere.

Shila Mehta is an artiste who is keeping Indian tradition and the cultural flag flying high by using Kathak and mixing it with modern forms and stories very beautifully. She is one artiste who is not only a fantastic teacher but is also a highly gifted dancer with unique creative ideas. I wish Shilaji all the best and hope and pray that she keeps India shining always in all her endeavours.

Sandip Soparrkar holds a doctorate in world mythology folklore, is a World Book Record holder, a well-known Ballroom dancer and a Bollywood choreographer who has been honoured with the Dada Saheb Phalke award, three National Excellence awards and one National Achievement Award by the Government of India. He can be contacted at sandipsoparrkar06@gmail.com