The Duchess’s choice of clothing garnered praise for not hiding her post-natal tummy. 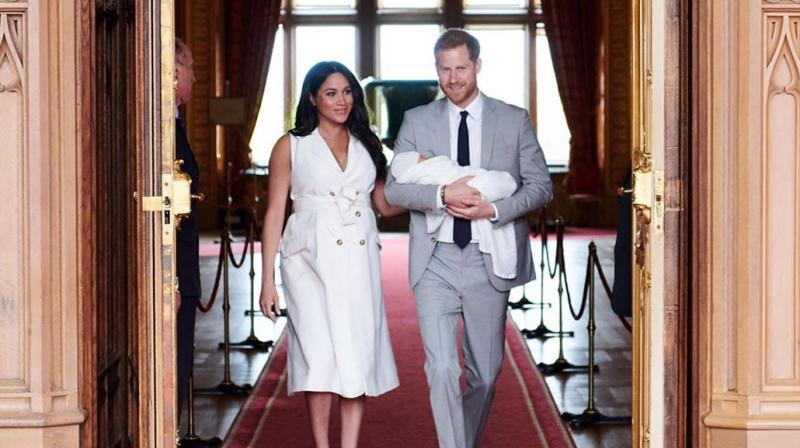 Post the appearance, the Duchess was hailed to be an 'absolute icon' for proudly showing her post-pregnancy belly. (Photo: Instgram @sussexroyal)

London: The Duke and Duchess of Sussex presented their new bundle of joy to the reporters on Wednesday afternoon. They arrived with the baby at St. George’s Hall in Windsor.

Post the appearance, the Duchess was hailed to be an 'absolute icon' for proudly showing her post-pregnancy belly. She wore a belted white blazer dress with tortoise shell buttons. She tied the belt neatly above her post-partum belly, and it accentuated the waist. The dress was by a young British designer, Grace Wales Bonner.

Meghan has been accorded trend-setter status for her fashion choices. Her stylish pregnancy wardrobe was much appreciated as she stuck to her favourite styles instead of opting for regular maternity wear like loose dresses.

Her Wednesday’s appearance was especially applauded as not only did she attempt to hide her post-pregnancy tummy, but she seemed to deliberately highlight it with her belted dress.

Celebrity stylist Lucas Armitage said “It would be a 'comfort' to other new mothers as the royal was 'showing off' her post natal bump.” “'We usually see new mums in shift shape dress but here Meghan is confidently showing off her post natal bump in a belted blazer dress, further adding attention to the area with double breasted gold buttons,” he added.

Several A-list celebrities attempt to push down the mum tum with tight shape wear for public appearances. Meghan’s sister-in-law Kate Middleton was also widely praised for not hiding the belly when she appeared on the steps of the Lindo Wing, just hours after giving birth to each of her three children. Kate and Meghan have both normalised post-baby bumps with their outfits.

Meghan is also being hailed by other women for ‘daring’ to wear white just a couple of days after giving birth. But it seems to be a trend that the Duchess is following; wearing white outfits for special occasions. She also donned a similar white tailored coat when appearing in front of the media following their engagement announcement in November 2017.