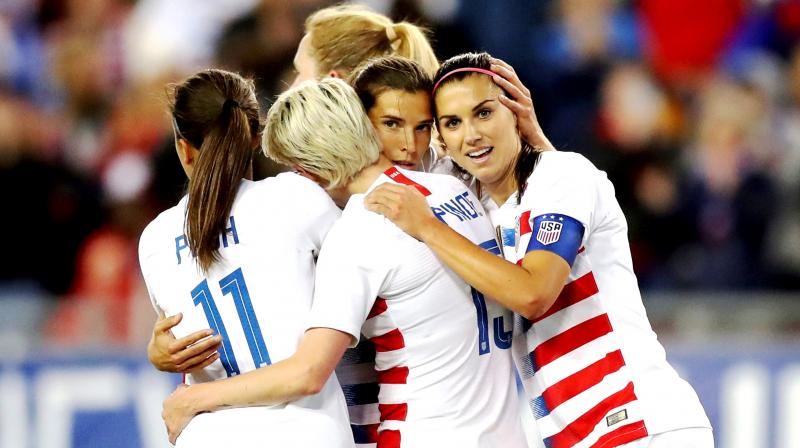 United States' Tobin Heath, second from right, is congratulated on her goal by Mallory Pugh, Megan Rapinoe and Alex Morgan during the first half of a SheBelieves Cup soccer match against Brazil in Tampa, Florida.

US: Three months before beginning their defence of their Women's World Cup title, American players escalated their legal dispute with the US Soccer Federation (USSF) over equal treatment and pay. Players filed a federal discrimination lawsuit against the federation Friday, alleging ongoing "institutionalised gender discrimination" that includes unequal pay with their counterparts on the men's national team.

The women's team has often championed equal rights issues and sought more equitable pay during collective bargaining two years ago. "I think a lot of people look to us and our team and the collective voice that we have and what we've stood for, for inspiration and for power, and as an ally in this broader fight for equality and human rights, really," said winger Megan Rapinoe, a co-captain and veteran of 149 international appearances.

The 28 members of the current women's player pool filed the lawsuit in US District Court in Los Angeles under the Equal Pay Act and Title VII of the Civil Rights Act. The lawsuit, which seeks class-action status, was filed on International Women's Day.

Players seek damages that include back pay. "We believe it is our duty to be the role models that we've set out to be and fight to what we know we legally deserve," forward Christen Press told The Associated Press. "And hopefully in that way it inspires women everywhere."

The US Women's National Team Players Association is not party to the lawsuit but said in a statement it "supports the plaintiffs' goal of eliminating gender-based discrimination by USSF." The men's and women's US national teams have separate collective bargaining agreements, and their pay is structured differently. That means there is no dollar-to-dollar salary comparison.

The lawsuit claims that from March 2013 through December 31, 2016, when the previous collective bargaining agreement expired, players on the women's team could make a maximum salary of USD 72,000, plus bonuses for winning non-tournament games as well as World Cup appearances and victories and for Olympic placement.

"A comparison of the WNT and MNT pay shows that if each team played 20 friendlies in a year and each team won all 20 friendlies, female WNT players would earn a maximum of USD 99,000 or USD 4,950 per game, while similarly situated male MNT players would earn an average of USD 263,320 or USD 13,166 per game against the various levels of competition they would face," the lawsuit says.

It concludes that a top-tier women's player would make only 38 per cent of a similarly situated men's player. A pay disparity was very apparent at the World Cup: In 2014, the federation gave the men's roster a performance bonus of nearly USD 5.4 million after the US went out in the round of 16 in Brazil. The women's team received a bonus of USD 1.72 million after winning the 2015 World Cup in Canada.

The USSF has long maintained that any disparity is the result of separate collective bargaining agreements. Compensation for the women includes a guaranteed salary and also salaries paid by the USSF for their time with clubs in the National Women's Soccer League. The men get paid based on roster selection for appearances for friendlies and tournaments.

While star players on the women's team, like forward Alex Morgan, can make as much as their male counterparts because of endorsement deals, the disparity becomes greater for players with lesser profiles. Terms of the collective bargaining agreements have not been made public. The lawsuit filed Friday seeks "an adjustment of the wage rates and benefits" for the women.