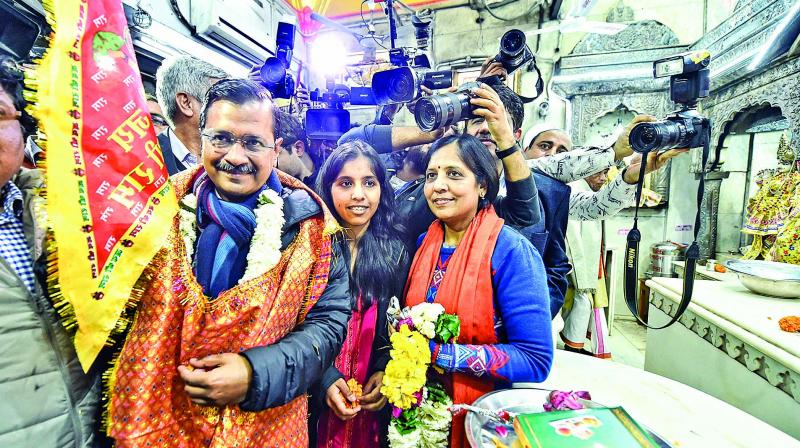 Not the one to take things lying down, Kejriwal's 24-year-old daughter, Harshita, hit out at the BJP for its remarks. Then, making an emotional appeal to Delhi voters on Tuesday, she asked them if working for the people, making education accessible to the people and reciting Bhagwad Gita were acts of ‘terrorism’.

Ahead of the Assembly Elections in Delhi, the Bharatiya Janata Party (BJP) called Aam Aadmi Party supremo and Delhi Chief Minister Arvind Kejriwal a ‘terrorist’. In fact, BJP MP Parvesh Verma first coined the term for the chief minister during a campaign trail in January while talking about the anti-citizenship act protesters in Shaheen Bagh. Later, Union Minister Prakash Javadekar added that Mr Kejriwal had called himself an ‘anarchist’ and that there is not much of a “difference between an anarchist and a terrorist”.

Not the one to take things lying down, Kejriwal's 24-year-old daughter, Harshita, hit out at the BJP for its remarks. Then, making an emotional appeal to Delhi voters on Tuesday, she asked them if working for the people, making education accessible to the people and reciting Bhagwad Gita were acts of ‘terrorism’.

Listing the work done by the AAP government in Delhi in the last five years, Harshita then added that the BJP leaders’ remarks just indicated a “new low in politics”.

“They say politics is dirty, but this is a new low. Is it terrorism if health facilities are made free and brought to people? Is it terrorism if children are educated? Is working for the people terrorism?,” Harshita asked, demolishing BJP's argument. “My father has always been in social services. I still remember he used to wake up my brother, mother, grandparents and me at 6 am, make us read the Bhagwad Gita and sing Insaan se insaan ka ho bhhai-chara and explain to us what it meant. Is this terrorism?”

The rise of a firebrand

However, Harshita, who has addressed several small gatherings and interacted with voters at their doorsteps over the last four months, is confident that the people of Delhi will show BJP by mid-February who the terrorist is.

While having Harshita's assessment of the ground situation is sure to warm her father's heart, the firebrand has only more in support for him.

“Let them level allegations,” she said, “Let them bring 200 MPs and 11 CMs. It is not only us, but also the two crore common people who are campaigning. They will show them on 11 February whether they’ve cast votes on the basis of allegations or the work done by the chief minister.”

Harshita, who graduated from IIT-Delhi in 2018 and joined a global management consultant firm, has been on leave since October so she can oversee different rounds of campaigning at the New Delhi assembly seat, where her father is seeking a third term. Even while studying at IIT, we are told, Harshita was keenly involved with the political activities of the AAP’s student wing, Chattra Yuva Sangharsh Samiti (CYSS).

Now, during her door-to-door campaigning, Harshita's mother Sunita always accompanied her. On a few occasions, she has even campaigned with her 18-year-old brother Pulkit, who also is pursuing his graduation from IIT-Delhi.

According to a volunteer, Harshita has strong political views on many contentious issues concerning the country. However, her politics mainly revolve around welfare measures for the poor, initiated by the AAP Government in the national capital.

Harshita strongly believes that the country can progress only and only if quality education and the best medical facilities are provided to the poor. The only way to make India an economic super power, according to Harshita, is to provide jobs to the unemployed youth and ensure that the needy earn remunerative wages.