A community of artists uses algorithms to make music that’s generated in real-time through live coding. 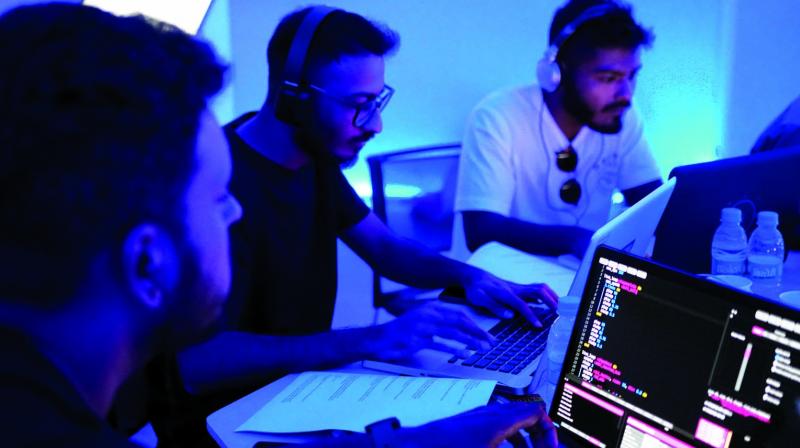 You’re in a dimly lit room pulsating with beats. Bands of coloured light emanate from black light bracelets while a flurry of neon visuals fly across a huge screen. But what’s interesting about the screen is that it is peppered with an intriguing mix of text and numbers – computer codes – that’s instrumental in creating the music and visuals filling the room. The musician standing bent over a laptop is typing in code and continuously tweaks it to generate music and visuals based on the mood, energy level and ‘vibe’ of the audience.

This is what an algorave, or an ‘algorithmic rave (party)’ feels like. It’s an event where music is generated in real-time through live coding. British musician Alex McLean, one of the first and most influential musicians in the space, coined the term in 2012 and also birthed TidalCycles, the program several live coders use to make music. Since then, the algorave movement has generated interest and a niche, and has a passionate following in the underground music scene, especially in the UK. The format is now making inroads into India as well, and yesterday’s two-hour long algorave performance at the Kala Ghoda Festival, where about eight algorave artists live-coded music and invited the audiences to tweak their codes through phone apps, was a proof of the movement’s advancement into the country.

But, if you’re still wondering about the fuss around algorave music, your bewilderment is justified. After all, hasn’t electronic music, which is an important component of Hip Hop, Trance and several other genres of music, been around for ages? But Abhinay Khoparzi, one of the brains behind Algorave India, a collective of algoravers and the Indian counterpart of the global algorave movement, explains how the aspect of live coding, which is integral to algorave music, makes the genre stand apart. “Most electronic music is made by machines, and those machines run on an algorithm. However, what performers at algoraves do is open the hood of that machine and show the audience how things are being manipulated. The algorave movement focuses on showing people exactly what we are doing. Everything we do on our screen can be seen by the audience,” he says. The musician goes on to point out how this transparency in the creation process encourages audiences to connect with the performer and his music, thereby adding a ‘human’ component to electronically generated music. And this is possible even if one isn’t familiar with the grammar and syntax of programming languages, because, since the lines of code are projected and executed in real-time, one can easily spot the tweaks being made and sense the corresponding alterations in the sound and visuals.

And this focus on human connection and interaction is at the heart of the algorave movement. That is why algorave artists have no qualms about their codes being copied. In fact, they encourage viewers to pull codes from their performances, experiment with them and create music that speaks to the individual. Thirty-two old Akash Sharma, the founder of Sound Codes, a lab that makes algorithms that create and manipulate sound and also captures sonic data, talks about how algorave programs, including his work, are mostly open-source, and therefore easily accessible to anyone. “The ‘open-source’ philosophy is crucial to the algorave movement; it’s about sharing knowledge and information. If you don’t share knowledge, the community will die and so our motto is  ‘share what you know and through this, you know more’,” he says. This philosophy also contributes to the anti-commercial spirit of the movement, where the focus lies on building a community rather than profits.

Another aspect of algorave music that artists in the space adore is the improvisational capabilities it affords. Unlike pre-composed, recorded electronic beats, algorave music is created in real-time and this allows the artist to improvise freely and often, just by tweaking algorithms.

Dhanya Pilo, the second brain behind Algorave India sheds light on how this improvisation also makes the genre inclusive.

She says, “Our performers are not bound by genres or stylistic choices. They are free to make any kind of music or even something that sounds like a post-apocalyptic party organised by robots. Algorave music and its events are inclusive, and does not discriminate on any grounds, be it music or gender and nationality.”

Joshua Thomas, who has been producing music for over 10 years and has been tinkering around with code-generated music since the past three years, says, “Code is easier to understand and a lot more accessible than sheet music. If you don’t know how to play an instrument you can’t doodle with music, but if you know how to code, you can. Coding lets you doodle a lot more with music.”

Akash recalls a project he worked on with algorave artist Sherin Verghese, which required him to install cameras using motion sensor algorithms inside the venue. “When the audience was dancing, their movements were creating a layer of sound; so the audience was jamming with the band. It’s not algorave in the traditional sense, but the music was algorithmically triggered,” he shares.  Algorave musician Raia’s Kala Ghoda performance was just as experimental, where she live-coded music to match the beats of a traditional dhol. The artist, who self-taught herself to code says that the algorave movement has and will continue to alter the music and art scene around the world. “The algorave movement is a part of a larger movement, where technology is finding its way into everything, including the performing arts. The next frontier I see is making music with your phone. I’m interested to see how the coming generations take on technology and music together and what happens when you put the power of making music into people’s hands,” says the artist