In a 32 minute film, Beenu Rajput has sketched the lives of five visually impaired personas and their journeys. 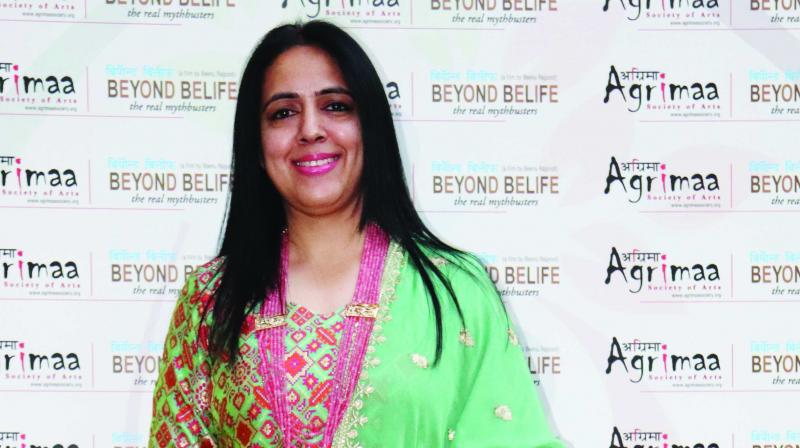 ‘Those who dare to walk alone, one day they have a convoy behind them’. This is the mantra for filmmaker and fashion designer Beenu Rajput. Her film Beyond Beliefs – The Real Mythbusters was recently screened at Alliance Francaise de Delhi.  In this 32 minutes film, the director-producer has sketched the lives of five visually impaired personas whose journeys inspire us all.  The first character is a professor teaching at Delhi University who has been always put down in his life. The other, a former captain of the Indian National blind cricket team, has been honoured with Padmashri Award. The third valiant soul is working as a journalist with one of the English dailies in the southern part of India.  The fourth person is a young, tenacious disability rights activist, who is also known for running India’s only disability radio station in Punjab. Last, but not least is a senior analyst. An IIM alumnus, he has recently cleared Chartered Financial Analyst (CFA) exam and is leading a very successful life in Mumbai. In a tête-à-tête about this film, Rajput opens up and shares all about her beliefs and documentary making.

How did you come across the people who you have featured in the documentary?

I went on a trip to Uttrakhand and around 40 visually people were travelling with us. The bus was full of clamour.  The whole journey was full of surprises and the best time to get to know them, their lifestyle and clearing out all the misconceptions created by the others towards these visually impaired people. The first time that I realized they are nothing less or different from what we call ‘normal’ people was when they started calling or messaging their parents or relatives that they have safely got into the bus. When we reached the destination, I got surprised to see them because they were enjoying nature, rain, and everything just like any other tourist. That was the point when I decided to make a documentary based on their lives. Generally, everybody focuses on the negative parts of specially-abled peoples’ lives, but I decided to project them as they are in real life.

What particularly inspired you to capture their lives?

Over a course of time, I have realized that life is very beautiful if we live it to the fullest. And being disabled cannot disqualify them from having access to every aspect of life.  A hero is an ordinary individual who finds the strength to persevere in spite of overwhelming obstacles, and these people are no less.

Do you feel pitying these people puts them in a tough spot and de-motivates them?

All the featured characters are well settled in their lives and living with pride in our Nation. An important thing is that they are known for their abilities, not disabilities. According to me, the only true disability in life is a bad attitude. These people don’t have dis-ability, they just have a different-ability. Society should understand this difference, and stop looking at them with kindness; give them a platform to show their talent. And believe me, you will be surprised that they are equally-abled to do anything. That’s it.

How long did it take to shoot and ready the documentary? Any hurdles that crossed your path and you’re proud to have overcome them?

It took me six months to complete this film. We went to Bengaluru, Uttarakhand, Faridabad, Delhi, Pathankot. While coming back from Uttarakhand, it was raining and we all were stuck in a landslide. And believe me, all of my cast members were still enjoying in the bus. It took a bit longer to complete the piece as we have used audio description in the entire film so that all visually impaired people could enjoy it.

Why and how did documentary making interest you?

I have always been inspired by Mike Pandey's work. He always encouraged me to shift to films from still photography. With his guidance and my interest in Indian art and culture, I started making documentaries.

Are we expecting any other myth-busters from you in the near future?

Yes, very soon. I am making a series of documentaries on specially-abled people. I would like to project every myth-buster who is an inspiration to others. My upcoming film, ‘Dancing Wheels – The conversation of mind body and soul’, features artists who dance on wheelchairs. They can’t walk but they dance with their dreams.