The incredible work that Babasaheb put into laying the foundation for an equal and fair country. 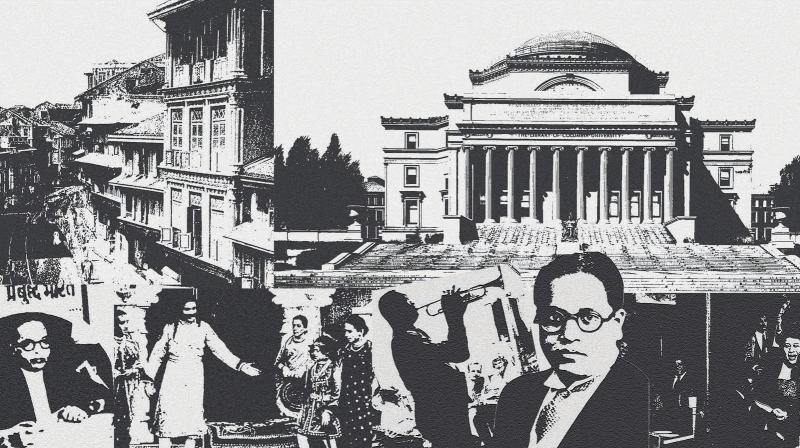 This year is a landmark year. We are celebrating Dr Ambedkar’s 60th death anniversary as well as his 125th birth anniversary.

Along with his 60th death anniversary and 125th birth anniversary, this year also marks the 100th year of Dr B.R. Ambedkar’s graduation from Columbia University in New York, where he was a student from 1913-16. Here, he had read his famous study of caste system titled Castes in India: Their Mechanism, Genesis and Development before a seminar conducted by the anthropologist Alexander Goldenweiser. Like New York, Mumbai had also played an important role in Dr Ambedkar’s life. The Wayside Inn (currently just a small window offering snacks) in Kala Ghoda, where he would spend a lot of time while he was writing the Indian Constitution has become nothing less than a pilgrimage for his followers (wonder if he would approve that).

To discuss the great thinker’s connection with the two cities a panellist of scholars will come together at the Godrej Culture Lab, in Vikhroli.

“This year is a landmark year. We are celebrating Dr Ambedkar’s 60th death anniversary as well as his 125th birth anniversary. Yet, so many years after the incredible work that Babasaheb put into laying the foundation for an equal and fair country, people are still discriminated on the basis of their caste. The ideas he so eloquently wrote about when he framed our country’s Constitution, seems to have been forgotten,” says Parmesh Shahani, head of Godrej Culture Lab.

According to Parmesh, the event will be a reflection on Ambedkar’s legacy and an exploration of his ideas that are needed to make India an equal and free country today.

Among the panellists, there are two professors from Columbia University. Farah Jasmine Griffin, professor of English and Comparative Literature and African American Studies, will present her research on jazz, gender, blues and public life on the culture of the Harlem Renaissance in Manhattan. Robert Gooding-Williams, professor of Philosophy and a faculty member of the Institute for Research in African American Studies. Historian and professor at Barnard College, Anupama Rao will share work on key transformations associated with historical inequality and social justice in the United States and India, will join them along with Professor Ramesh Kamble from the University of Mumbai who has extensively researched the social and political experiences of Dalits in urban settings such as Mumbai.

On December 9, 5 pm, At Auditorium, Godrej One, Vikhroli (East).