This Varanasi temple is making the idols wear masks, thus inspiring the public to do so too. 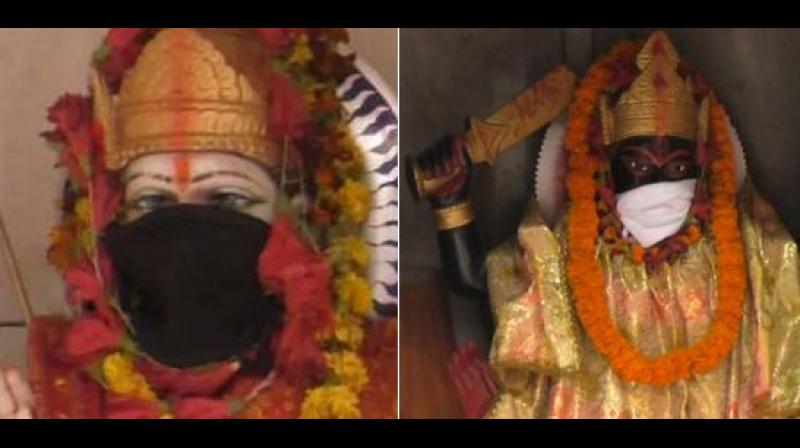 All the idols in the temple now have anti-pollution masks on them, except for Goddess Kali. (Photo: Twitter)

As the air quality steadily worsens in the northern states of India, the members of the public have introduced anti-pollution masks in their daily routine. But it seems like people are not the only one who are wearing these masks-idols in temples are wearing them too.

Harish Mishra, a priest at the Shiv-Parvati temple in Varanasi decided to put the masks on the idols of the deities to protect them from the high amount of particulate dusk in the air. “Varanasi is a place of belief. We treat our idols as living deities and take pains to make them happy and comfortable,” said Mishra to IANS.

He also added that the idols are also covered in blankets during the cold winter months. All the idols in the temple now have anti-pollution masks on them, except for Goddess Kali. There is a belief that Kali’s tongue should not be covered.

The stubbing burning in Haryana is what caused the air to be polluted, all across the northern states. Bursting of crackers during Diwali also added to the smog. Now, instead of rectifying the situation, the municipalities are burning waste out in the open, just adding to the pollution. “Until people come together to change their habits, the situation will never change,” added Mishra.

Making the idols wear masks may not have helped the idols, but it brought about a positive effect among people. It encouraged them to wear the anti-pollution masks themselves. If the ‘Gods are caring about the environment,’ here is hoping the public gets inspired to do so too.