On two nonstop flights, he curled up in a ball for hours on end, damp to the touch. 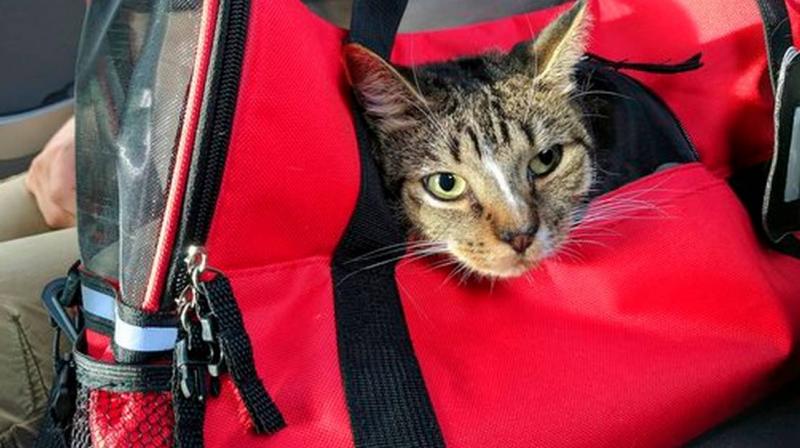 On two nonstop flights, he curled up in a ball for hours on end, damp to the touch. (Photo: AP)

But there's one aspect of modern life Oscar doesn't like: flying.

Rather than leave Oscar home in New York while I spent 10 days in Phoenix, I decided to take him with me. It's not that unusual. Over 500,000 animals a year fly on US airlines as cargo, and it's common now to see dogs in the cabin, too.

But Oscar appeared to be terrified. On two nonstop flights, he curled up in a ball for hours on end, damp to the touch. (Cats mainly sweat through their paws, but veterinarian Brian Collins explained to me that sweat could be profuse enough to wind up on his fur. Or maybe it was my sweat.)

The experience was, however, the closest we'll probably ever come to having celebrity status, at least in terms of the positive attention we got from airport and airline workers. Their unexpected sweetness tempered the stress of traveling with a pet. I've never encountered such friendly TSA agents. Flight attendants didn't snap at me to put my seat in the right position before departure. Instead, they cooed at me — or, rather, at the gray-brown tabby in my lap.

It still wasn't fun for either of us, as I described in a podcast for the AP Travel series "Get Outta Here." And it cost me hundreds of dollars.

Airlines have different pet policies. American had me reserve a spot for Oscar in the cabin after I booked, then pay the extra fee at the airport. JetBlue charged the pet fee when I booked my ticket. Airlines limit how many pets can be in the cabin, so it's best to reserve a place fast.

Taking Oscar cost an additional $225. I also had to pay almost $50 more to check my luggage, because Oscar counted as my carry-on item.

I didn't need any paperwork from the vet, because Oscar wasn't traveling internationally or as cargo in the plane's hold. Check before you go, as policies differ by airline.

You need an airline-compliant carrier that fits under the seat, which is easy to find. More investments: pee pads ($10), a collapsible water bowl (about $10), a harness and leash ($27). I also brought his favorite toys and treats along.

It was only after our trips that I found out airlines are not allowed to charge fees for "emotional support" animals. Turns out it's not that complicated to document one's need to travel with an emotional support animal. Not that I'm suggesting anyone would ever do it just to avoid the fees.

Getting through security is an ordeal. Animals need to come out of their carriers, which go through the X-ray machines.

This is no big deal for dogs. They are accustomed to leashes and can walk through the human scanners with their owners. Cats are different. I had nightmares of a spooked Oscar escaping my arms and tearing through the bright, noisy halls of JFK, never to return.

Instead, I walked through the scanner without him while an agent took him in his carrier to a private room next to the security checkpoint. Then I stayed with him in the room, where he hunched on a metal table behind a closed door, while the carrier was scanned before being returned to me.

All airports have private screening areas that pets can be taken to, though they may not be separate rooms, said TSA spokeswoman Lisa Farbstein.

A harness and leash make for a good backup; I didn't find them necessary.

Airports have family bathrooms, so I took advantage of that private room to lay out a pee pad for him and offer him water. Many airports also have pet relief rooms or areas with water, fake grass and even fire hydrant props. Cats might be rattled, though, by the presence of dogs.

I worried about how Oscar would adjust to the cabin air pressure while the plane took off and landed, but he didn't make a peep. "I've never had any sort of animal suffer consequences," said Collins, a lecturer at Cornell University's veterinary school. "They seem to tolerate it quite well."

Some owners give their pets sedatives to fly, but I chose not to. I held his carrier on my lap, except for the takeoff and landing, and petted him throughout the flight, which may have helped.

He didn't meow or yowl, and a few hours in, he even pawed at a string and accepted the treats I was anxiously thrusting at him.

Still, I don't plan to fly with him again unless I'm moving or it's an emergency. Curiosity didn't kill this cat's owner, but it did leave me sweaty, stressed and poorer.