A ramlila with a legacy that amalgamates modern 3d viewing and various Indian dance-forms. 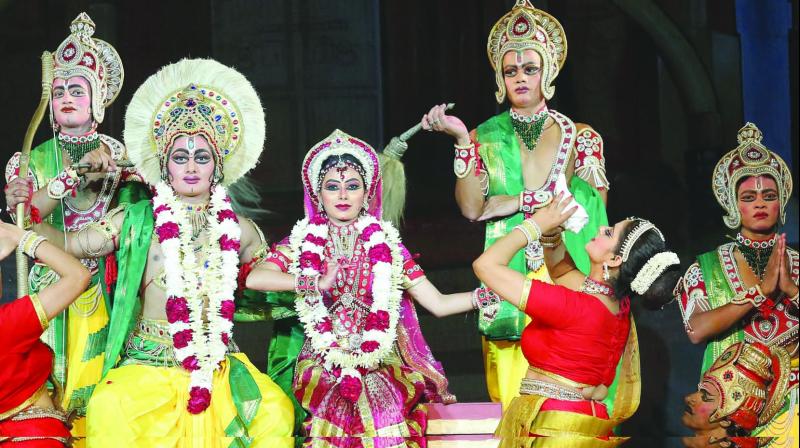 This is the 63rd consecutive edition of the Ramlila

Other than its religious connotations, it is a family tradition for many to watch a Ramlila performance around Dussehra. Sure, you can always read the Ramayana, or even watch it on television or, these days, OTT platforms. But to see the characters up on stage, complete with sound effects, is a whole different experience.

And that is why Shriram Bharatiya Kala Kendra is presently running a stage show called Shri Ram. For the past many years, cultural impresario Shobha Deepak Singh has directed this version of the Ramlila, and she presents something unique each time. This year, the show is using LED displays to create a three-dimensional effect.

Interestingly, history and tradition are attached to the performance — it happens to be in its 63rd year. The first Ramlila was organised by Shobha’s mother, while the daughter continues the tradition. In a chat with Shobha, she explains why people keep coming to Ramlila every year despite knowing the story. She says, “It is because we never reveal the same thing. What we have done this year is totally different from last year. We want the show to improve every time.”

Keeping things fresh presents a set of challenges but Shobha always manages because of her creativity. She continues, “I have been involved in the making of Shri Ram for the last 50 years and its legacy lies in my own creative inputs and ideas conceived, which go into choreography, costumes, ornaments, masks, jewellery, etc.”

A highlight of the show is its use of LED walls. The reason? She explains, “It has been used in the show because of some scenes that could not be executed through dance. For example, Hanuman going to Lanka, and Ram and Sita heading back to Ayodhya in the Pushpak Viman.”

Watching the characters of the Ramayana on stage is an experience of another level. When asked about the fascination of seeing it all unfold on stage, she elaborates, “It’s all real and you cannot rewind the mistakes that. And coming to the fun, whatever fun the audience had, I ahad as well.”

She has been conducting Ramlilas for over fifty years, and she does get tired after working on Ram. But, she is not exhausted by it at all. She says on a concluding note, “It is not exhausting because we are breaking our own records — day by day, moment by moment and year by year”’