The Nobel economics prize was created by the Swedish central bank "in memory of Alfred Nobel" and first awarded in 1969. 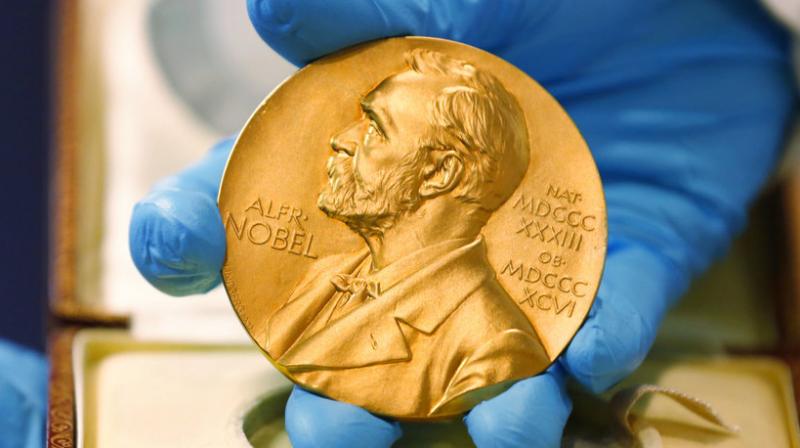 As with the other Nobels, nominations and deliberations are kept secret for 50 years, so it's nearly impossible to know which way the prize committee is leaning each year. (Photo: AP)

Stockholm: The 2018 Nobel season, marked by the lack of a literature award for the first time in 70 years, winds up Monday with the economics prize which experts say could go to research on the climate or development.

As with the other Nobels, nominations and deliberations are kept secret for 50 years, so it's nearly impossible to know which way the prize committee is leaning each year.

"From a historical perspective, there are about as many conservative as liberal economists in recent years and the trend has been for diversification: the range of fields of research that have been honoured has been more vast, the choice of laureates has been more eclectic," economist Gabriel Soderberg of Sweden's Uppsala University told AFP.

Last year the prize went to US economist Richard Thaler, a co-founder of the so-called "nudge" theory, which demonstrates how people can be persuaded to make decisions that leave them healthier and happier.

“The heart of the Nobel prizes are the awards for science, peace and literature. The economics prize is not formally a Nobel prize," Soderberg said.

That fact may make "the jury more attentive to public opinion, a little more sensitive to the way in which the laureate will be received," he said.

This is why "societal questions are reflected in the prize. The issue of climate change is very important right now and (for this reason) William Nordhaus could be honoured," he said.

Nordhaus, a Yale University professor known for his research on the onomic consequences of global warming, bears two of the typical characteristics of a Nobel economics laureate: he's a man, and he's American, like 70 percent of previous prizewinners.

At 77, he's a decade older than the average winner.

Only one woman has won the economics prize since 1969, Elinor Ostrom in 2009.

Micael Dahlen, a professor at the Stockholm School of Economics, said that was all the more reason to give the nod to a woman this year.

"I'd really like to see the prize go to (France's) Esther Duflo, whose research has focused on developing economies and gender equality, or Cuban-born American Carmen Reinhart, active in the field of public finance," Dahlen explained.

Meanwhile, Hubert Fromlet, a professor at Sweden's University of Vaxjo singled out several American women who could be honoured: Anne Krueger, the first woman named the deputy head of the International Monetary Fund, Susan Athey, known for her work on auctions and decision making under uncertainty, and Claudia Goldin, who researches gender inequality.

"I could also see the prize going to a macro-economist like Ben Bernanke," the former head of the US Federal Reserve, said Dahlen.

Among the "usual suspects" cited frequently for the Nobel are US economists Paul Romer and Paul Milgrom, and Frenchman Olivier Blanchard, a former IMF chief economist.

The youngest Nobel prize is this year celebrating its 50th anniversary. Created in 1968 to mark the tricentenary of the Swedish central bank, the Riksbank, it is the most prestigious prize an economics researcher can win.

Nobel's will stipulated that the prizes shall go to people who have worked to create "a better world".

According to Micael Dahlen, "economics has the same sweeping effects on society as the other disciplines and can therefore be considered a prerequisite for everything from scientific progress to culture and peace".

"It's about understanding and creating the basis for well-being and development," Dahlen said.

The prize is to be announced on Monday at 11:45 am (0945 GMT) in Stockholm, wrapping up the 2018 awards season in which the most highly-anticipated prize, that for peace, on Friday went to Yazidi women's campaigner Nadia Murad, a former Islamic State sex slave, and Congolese doctor Denis Mukwege, who helps women recover from the violence and trauma of sexual abuse and rape in war.

The Nobel, which consists of a diploma, a gold medal and a cheque for nine million kronor (around $1 million, 863,000 euros), will be handed over at a formal ceremony in Stockholm on December 10.