A cinematic ode to Jethmalani

Soha Ali Khan and producer Ronnie Screwvala have been working on a biopic on the now late lawyer’s life. 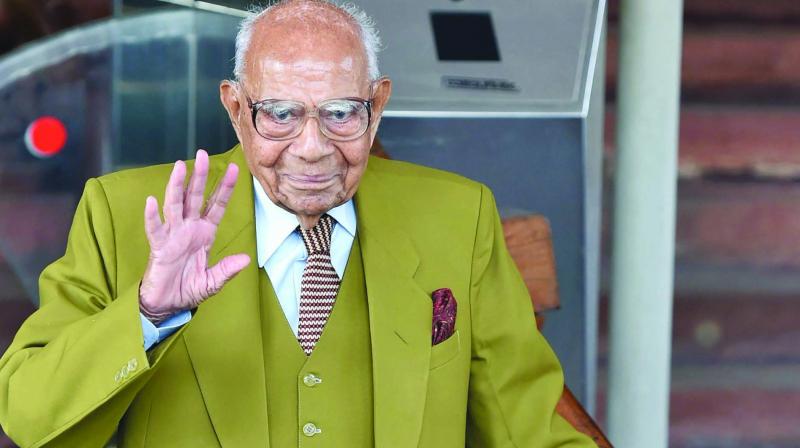 Ram Jethmalani is no more, and a man like that will certainly be remembered through films. Interestingly, Soha Ali Khan and producer Ronnie Screwvala were working on a biopic on the now late lawyer’s life.

“Few people live life on their own terms and with their own conviction; most of us go through life based on what we want others to think of us. Ram was an exception to this and lived a full life. We should all celebrate his achievements and respect him for what he stood for whether popular or not,” Screwvala says.

A while ago, Soha told us that they had found a director for the film. Hansal Mehta was on the shortlist, but it remains unconfirmed. “I am going to be producing the biopic on Ram Jethmalani along with Ronnie Screwvala. We will start filming soon. We have found a director for the film, but I cannot reveal the name now. Jethmalani is almost 95 and he has had a career spanning seven decades. So it will all depend on which decade we are choosing, and the actor will be cast accordingly,” she had said.

Actor Sachin Khedekar essayed the role of Lakshman Khangani, inspired by the character of Ram Jethmalani, in the Akshay Kumar film Rustom, which is based on the Nanavati case.

“It is very unfortunate to hear about Ram ji. I did play a character inspired by him in Rustom. It was about the early days of his career. But it showed the kind of ability he had to communicate and put his point across. He had the gift of the gab. I am lucky to have essayed a role inspired by his life,” Khedekar says.
—Sanskriti Media