Durga Puja ads with the goddess and her children featured in cartoons are a common sight in Kolkata. 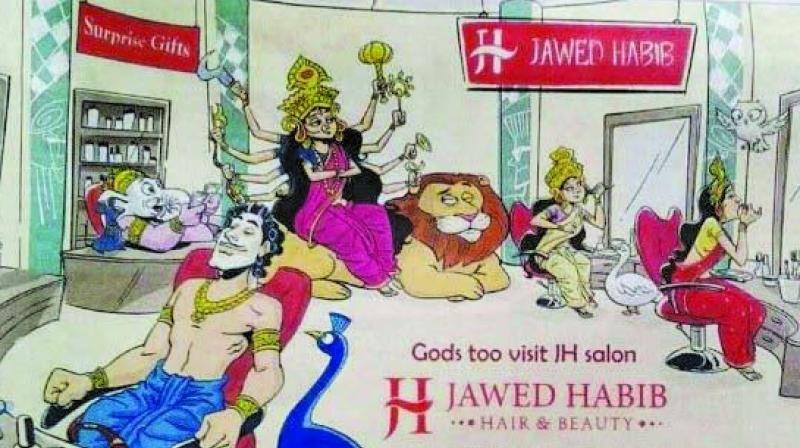 The ad hurt the religious sentiments of many, who rushed to abuse, boycott and threaten to kill Jawed; and make obviously anti-Islamic comments.

An ad by a Jawed Habib salon in Kolkata that depicts Hindu gods in a salon hurt religious sentiments. We find out how tricky it is to use religious motifs in advertising.

Renowned hairstylist Jawed Habib seems to have irked the delicate religious sentiments of many on social media, with an ad promoting his nation-wide chain of salons for the upcoming festive season. The print ad showed several Hindu gods — Durga, Ganesh, Karthik, Lakshmi and Saraswati — enjoying a spa day at a Habib’s parlour with the tagline reading, “Gods too visit JH salon.” What was originally meant as a print ad for Kolkata folks avidly awaiting Durga Puja became the topic of a social media storm.

The ad hurt the religious sentiments of many, who rushed to abuse, boycott and threaten to kill Jawed; and make obviously anti-Islamic comments. Not really bothering to find out the context behind the ad, the social media activists pointed out how Jawed was slighting another religion while leaving his own untouched.

At the end of the Twitter spat, the advertising group on behalf of the brand put up an explanation about the fact that the ad is simply way to build up the excitement for Durga Puja. Habib himself posted a video apologising to his followers and varied clientele. 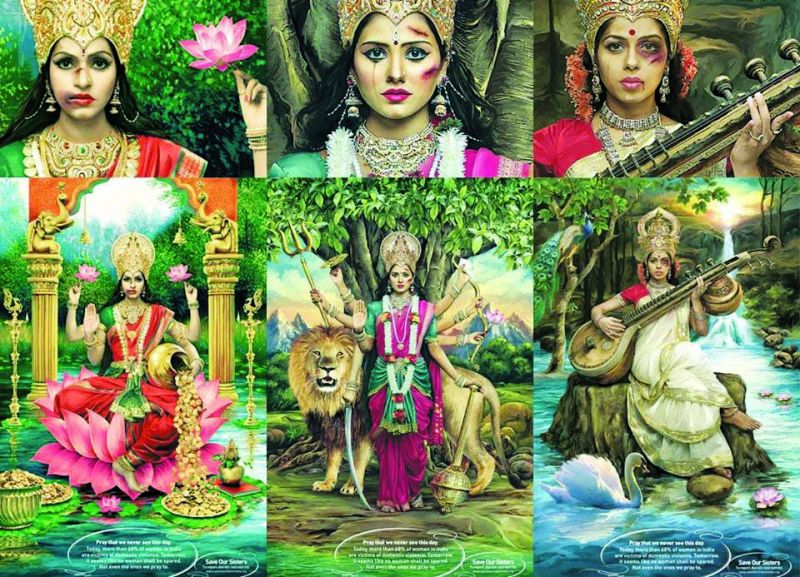 Durga Puja ads with the goddess and her children featured in cartoons are a common sight in Kolkata. However, in the age of social media, one needs to be more careful as to what they print, says Ajay Gahlaut, executive creative director of Ogilvy and Mather. “Nowadays, with social media, the reach of every ad is much further than it was even a few years ago. It’s best in such situations to steer clear of religious themes, since it is bound to hurt someone’s sentiment,” he says. “And it only takes one person’s hurt sentiment to start something on social media, since negativity is so easily spread.”

Ad man Vinil Mathew concurs with this point, adding that one shouldn’t run away with a creative idea, unless sure about the social context. “A more mature copywriter would also keep the social background and the people for whom he is creating the ad in mind. If you end up offending your audience, which religion can in a country like India, the ad doesn’t achieve its motive,” he shrugs. 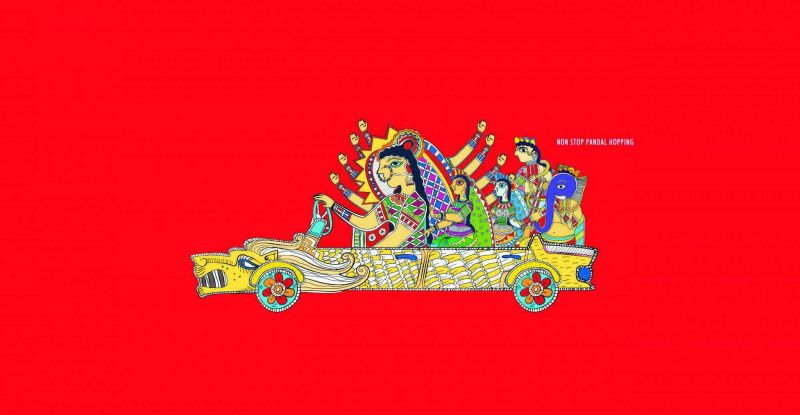 This print idea is hardly the first instance of an advertisement hurting religious sentiments. Last year’s Patanjali ad earned flak from the Christian community in Bhopal because while calling for a boycott on foreign products, the clip showed the Christian cross thrice. An anti-domestic abuse campaign by Save the Children and Mumbai-based ad agency Taproot also got a lot of backlash when it depicted Hindu goddesses who had been abused.

Why then, do people continue to take a risk with religious ads? Gopal MS, creative director at Tailor India explains that sometimes any traction is good — whether good or bad. “Most advertising agencies don’t go with it because you have a responsibility and an image to maintain. It’s not the best way for advertising, and most companies certainly avoid it, but there are those who simply want to create some sort of stir on the Internet with their ad. It’s just a way to get attention,” he explains.

One of India’s topmost ad filmmakers, Abhinay Deo, however, questions the whole motto behind the entire trolling. “What exactly are we trolling here? Are we trolling Javed because he follows Islam and chose Hindu religious idols for branding or advertising purposes or are we trolling the usage of religious idols in general for any kind of advertising purposes? If this case is revolving or building up on the basis of the former statement then, we, as a society, should be shameful, as one can Google search to find ample number of advertisements depicting various kinds of idols being used to sell myriad kinds of products. We need to ask the right kind of right question to start and sustain a debate.”

He adds that, though such ads do run the risk of controversy, in certain contexts, the use of religious symbols is not unwelcome. “A lot also depends upon the ad. People might not get offended when, for example, a person or or  halwai selling modaks chooses to depict Ganesh (i.e. use Ganesha for branding) during Ganesh Chaturthi. So some usages are right and some are wrong can’t be the solution to an issue,” he concludes.

We are a franchise and it was one of our branches in Kolkata which decided to run the ad. It was a blunder on the part of my partner, but then people do not know his name or face — the face associated with the Habib brand is mine. So I came forward and apologised the very next day.  The ad shouldn’t have been printed since it does go against Indian sentiment. As a teacher, who has been teaching in India for so long, I would never want to hurt their sentiment. I have hundreds of employees spread across the country and 90 per cent of them are Hindu. Why would I want to hurt their feelings and sentiments through an ad?
—Jawed Habib

—With inputs from Dipti