Met Gala 2018: Rihanna as the Pope, and Jared Leto as Jesus set Twitter on fire

Leto, who is known for his quirky fashion sense, went a step ahead by channelling Jesus. 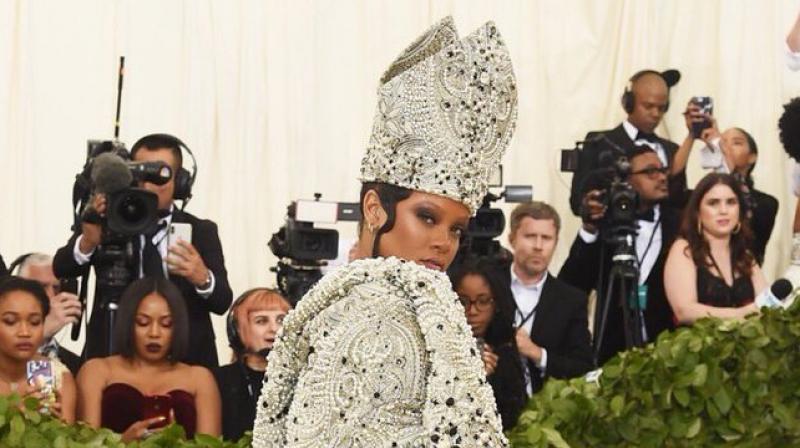 This year's theme is the influence of Catholicism on fashion. (Photo:Twitter/Yung_TheoLogySA)

Rihanna and Katy Perry were among the celebrities who took the theme of the Met Gala very religiously this year.

Rihanna looked absolutely papal when she arrived in a Maison Margiela pearl- and crystal-embellished gown by John Galliano, complete with a matching papal mitre and necklace.

Perry also wowed in a metallic mini-dress, long boots and massive feathery wings. She looked like a post-punk angel. Her wingspan was so broad she was forced to turn sideways as the entered the museum.

This year's theme is the influence of Catholicism on fashion.

Both singers have been the gala before. Last year, Rihanna was dressed in Commes des Garcons, with stagey pink on her cheeks. Perry wore a veiled dress created just for her by John Galliano.

This year’s Met Gala was hosted by Rihanna, Amal Clooney and Donatella Versace alongside Vogue’s Anna Wintour. Rihanna chose a Maison Margiela Artisana attire accompanied with a Pope like hat.

While Hollywood men like to stick to the conventional tuxedos, this year’s gala was an exception with Black Panther star Chadwick Boseman and singer-actor Jared Leto, giving women a tough competition with their dramatic sartorial choices.

While Leto, who is known for his quirky fashion sense, went a step ahead by channelling Jesus.

However Twitter couldn't get enough of RiRi and Leto's looks, here is how they reacted:

Jerod Leto and Rihanna mark the beginning of a religion i can get behind. #metgala pic.twitter.com/LTqhoEg2O9